I currently have a fridge full of bacon because I am in the middle of conducting experiments for a cook-off I'm doing this summer in which the delectable porcine product is a requirement. (More on that at a later date.) Although the cook time far exceeds my allotted time, I thought I'd whip up a batch of bacon jam. I found a couple of recipes on the Interwebs but decided to try Kevin Gillespie's version from Top Chef season 6.

As I ate a spoonful of jam spread on a cracker, I thought it would be a marvelous antidote to Rocco's brownies.

Candied Bacon Jam (adapted from this recipe at BravoTV.com)

1. Render bacon in a heavy sauté pan over medium heat until bacon is crispy. 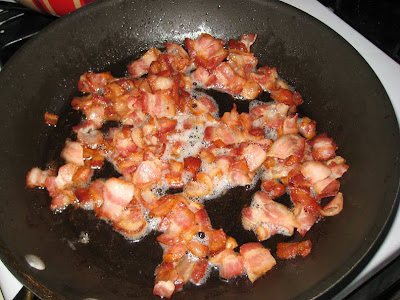 2. Remove bacon and about half of the rendered fat. Cook julienned onions in the remaining bacon fat, scraping the bits from the bottom of the pan until onions are dark golden. 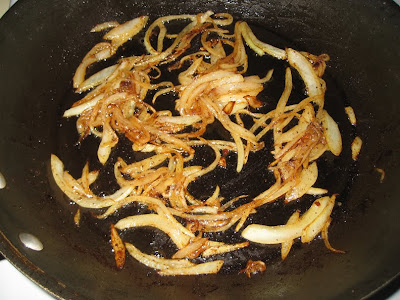 4. Turn the heat up a bit. Add a third of the chicken stock and reduce mixture until thick, 5-15 minutes. Watch carefully that it doesn’t burn. At this point, it's kinda like making risotto. 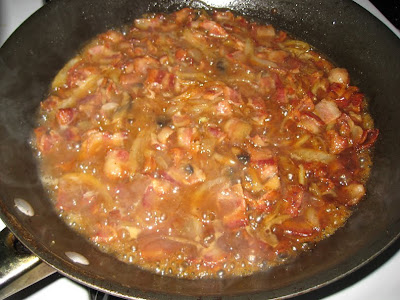 5. Add half of the remaining stock and reduce again until thick.

6. Add all of the remaining stock and remove pan from the heat. Season with salt, pepper, and cayenne to taste.

7. Pour contents into a blender and puree until fairly smooth. I waited until it cooled down a bit. Didn't look too pretty after it came out of the blender. 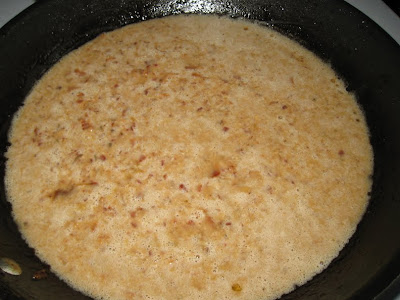 8. Pour contents back into sauté pan and stir in honey to combine.

10. Pour into a jar, allow to come to room temperature, and refrigerate. There will be a layer of fat at the top - keep this! It will act as a preservative for the jam, like the fat on top of rillettes. 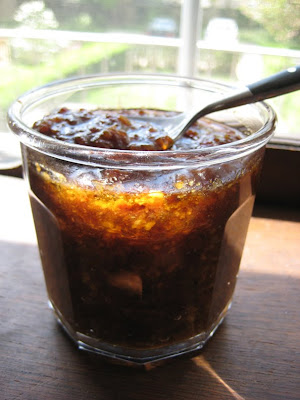 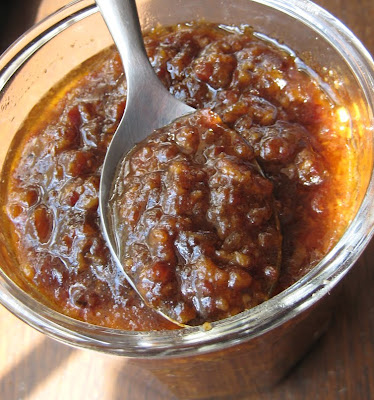 Gorgeous stuff, isn't it? Sweet, bacon-y, fantastic. Mr Minx thinks it tastes more like short ribs than bacon, probably because I've used David Chang's rather sweet short rib recipe several times. I think it took about an hour, overall, and very worth it. Can't wait to use this on a sandwich, be it burger, grilled cheese, or a BLT!
Posted by theminx

Did I miss something? At which step do you add the rendered bacon back into the mix?

Thanks, Kate. Kevin missed that step in the instructions so I did as well.

So, how are the old cholesterol levels doing with all that bacon?

Just because I'm cooking with it doesn't mean I'm eating pounds of it at a time! But my total cholesterol is genetically very low - usually around 130 or so.

I am envious! Mine is genetically very high - I need a low-fat diet and statins to get my total cholesterol where yours is naturally. So eat some bacon for me, okay?

I have low cholesterol too so I can't wait to try this recipe. Looks easy and scrumptious! Thanks for posting with photos!

Thought you'd want to know that I posted a Facebook link to your bacon jam post and I know of no fewer than 3 people who have tried it and at least one is posting about it with a link to your blog. So you're almost going viral! Love your blog btw.