After reading accounts on several other blogs about how wonderful it is, last night we decided to try out David Chang's brussels sprouts recipe. We love the earthy goodness of brussels sprouts and usually prepare them by separating the leaves, giving them a quick steam and seasoning them with Golden Whisk's Star of Siam oil (sadly discontinued). 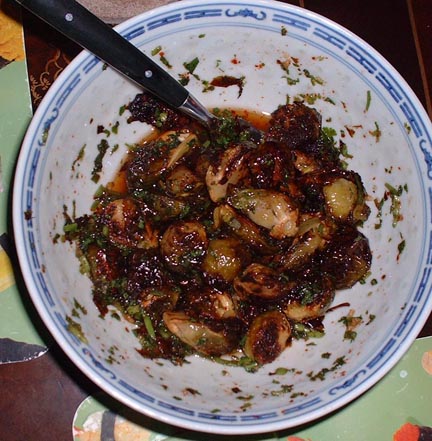 Chang's recipe involves roasting the wee cabbages at 450F and then dousing them with a Southeast Asian-inspired combo of fish sauce, sugar, garlic, and fresh mint and cilantro. I didn't have the Thai chile called for in the recipe, so I substituted some Korean red pepper flakes. The puffed rice garnish comes from Indian snack foods, but seasoned with Japanese seven-spice powder makes this dish truly pan-Asian. No sichimi togarashi in my house, unfortunately, so I just added salt, pepper, and ground ginger to the rice. 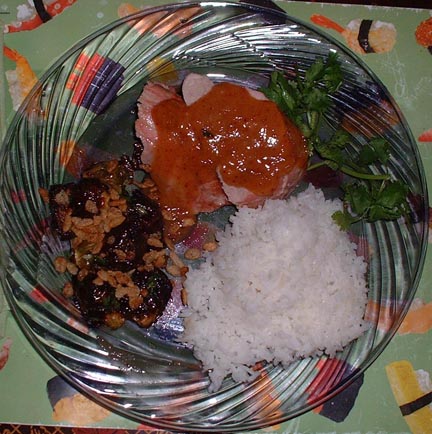 I decided that pork tenderloin would be the main dish and wanted to give it a similarly Asian flavor profile. I made a sauce with peanut butter, mango preserves, coconut powder, rice wine vinegar, and ginger, thinned out with some store-bought Thai broth. Plain Jasmine rice was the final component of the meal.

Ok, those sprouts were seriously good. Although while roasting, they gave off the unmistakable smell of cruciferous vegetables, they didn't taste cabbage-y at all. The sweet morsels of caramelized goodness, combined with the crispy rice (which really seemed like a skippable novelty ingredient) were a symphony of textures and flavors. All they needed was the rice, although the pork was pretty darn good, if I do say so myself.
Posted by theminx