I can't make a trip to NY without getting together with my friend, snarky Project Runway recapper and Papi aficionado David Dust. We met through our blogs a few years back and we've become good friends; he's one of those rare people with whom I can let down my hair and just be me. (Lord knows I hate having to be "on" when I meet up with people, but it seems to happen with increasing frequency as the years go by.)

On my most recent trip to NY, we shared two meals. On the same day I went to Momofuku Ssam Bar, I accompanied David to Arby's.

Yes, I ate at a fast food restaurant, and you know what? I liked it.

I'll wait until you pick yourself up off the floor.

The Arby's we visited is housed in the former Gage and Tollner restaurant space in Brooklyn, so it's a bit swankier than usual. David wrote about it extensively on his blog and took better (and many more) photos, so if you're interested in the story, go here to check it out. 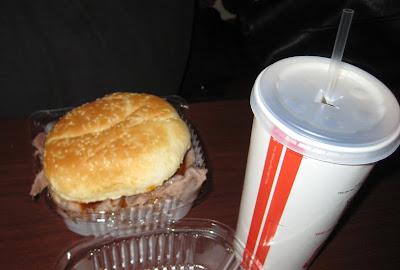 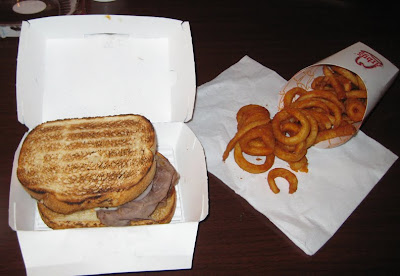 I went for the Patty Melt combo with curly fries and a small drink. (Remember when 16oz drinks were "large?") The sandwich featured melted Swiss cheese, 1000 Island dressing, and roast beef on toasted sourdough. Here's a close-up for you. 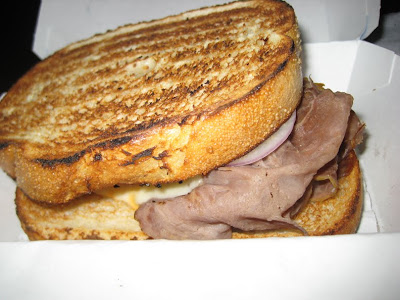 Gotta admit - it was good. Better than a fast-food hamburger, any day. The curly fries were meh - I prefer naked potatoes, and these seemed to have some sort of coating. Not as bad as those extruded, shrapnel-coated fries I hate so much (featured at cheap-ass pizza joints everywhere), but not my favorite.

One thing I really like about Arby's - they have Diet Dr Pepper, always my carbonated beverage of choice.

Two days later, David had his first experience with Korean food. He had mentioned wanting to check out Koreatown next time I was in the area, and I was more than happy to indulge him. I chose the restaurant Kang Suh because they offer gas-fueled barbecue grills (as opposed to charcoal) and I wouldn't reek too badly on my way home from NY. Also, the restaurant was spitting distance from Penn Station, which is where I headed immediately after lunch. 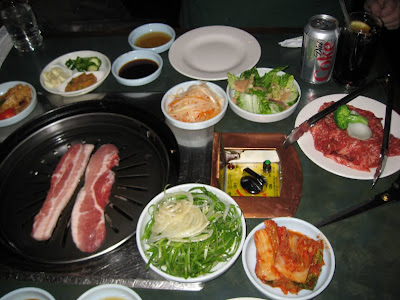 David chose the plain pork bbq (on the grill) and I had boneless kalbi (short ribs, on plate at top left). Both were excellent, particularly the beef, especially when rolled in a leaf of lettuce with some dipping sauce, onion, and a dab of kimchee. I would have liked a larger variety of panchan, and maybe some soup, especially for the rather astronomical price we paid, but this was New York, so I suppose I can't complain too much.

I always have interesting dining experiences with David!!! Get him to take you to the Afghani place sometime!

What? David has eaten Afghan food before?

We have a terrific Afghan restaurant in Baltimore - The Helmand. It's owned by one of the brothers of the current president of Afghanistan.

Haven't eaten at an Arby's in forever but I remember liking their roast beef very much.

Yes - Believe it or not, I HAVE eaten Afghan food before. There is an Afghani restaurant on my block which is dirt cheap (the food is pretty good). Maybe that's where we'll go next.