I am fascinated with and love to read about Asian food and culture. One of my favorite blogs is Eating Asia, for its gorgeous photography and interesting information about the continent and its various cultures and foodstuffs. 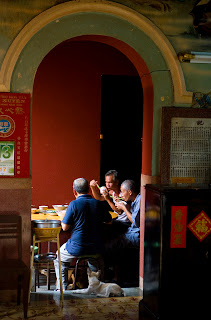 Anthony Bourdain has stopped wearing his ever-present thumb ring; he's also lost the earring. Bourdain claims he's deFierifing himself. He quit smoking a while back - what's next? Rehab?

Speaking of rings, it's worth noting that they're notorious hiding places/vectors for bacteria and thus frowned upon in food handling. With each added ring, a cook is increasing your chances for infection exponentially. When you eat food handled by a guy with four or five rings on his fingers, it's like the gastro-intestinal version of unprotected group sex: each added protuberance makes it that much more likely you're picking up something -- really nasty. You might consider that next time Guy Fieri makes you an order of wasabi meatballs.

Ugh. Now quick - to get rid of the thought of Guy Fieri and his balls, check out this cute stop-motion video about chocolate.


And now, back to Guy Fieri. It's even worse than balls.
How well do you know your cheeses? Or your fonts? Time to play "Cheese or Font!"
Chef Rocco DiSpirito is writing his latest cookbook with suggestions from his fans on Facebook and Twitter. Hunh. He still won't accept my friend request. Wonder why?
Posted by theminx

Cheese or font?? My goodness! I did terribly!

It is good to know the cleanliness issue regarding rings. I hadn't considered it but it makes perfect sense.