Welcome to another recap of Top Chef Las Vegas, this week with 500% more Frenchitude!

The cheftestants have a change in venue today. Instead of meeting Padma in the Top Chef Kitchen, they head to Daniel Boulud's Brasserie at the Wynn. There they find Tom, along with Chef Boulud himself. 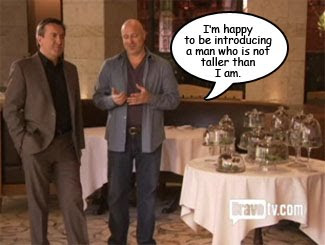 Tom gives an introductory spiel about the fabulosity of the guest chef in which he pronounces Boulud's name weirdly, at least to my ear. 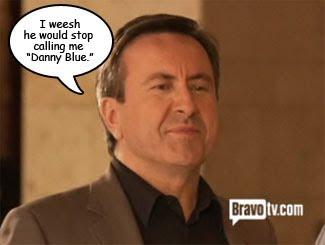 Those darn French with their weird hard-to-pronounce names!

Chef Boulud is kind of a big deal. At least Eli thinks so. 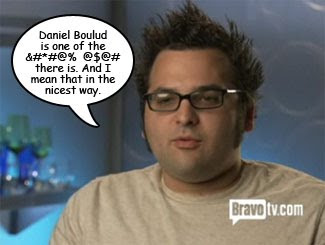 Enough ass-kissing - time for the Quickfire! 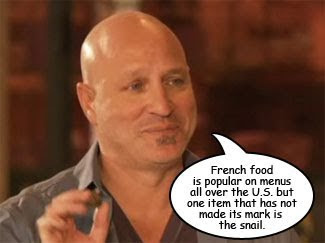 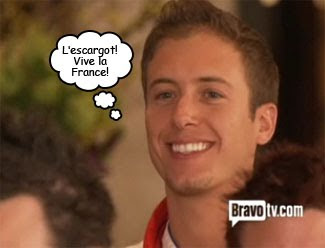 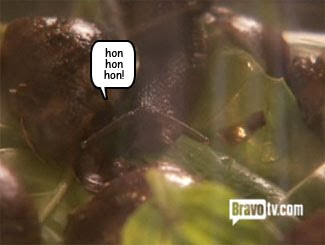 Tom interrupts Mattin's reverie by adding a twist to the contest: 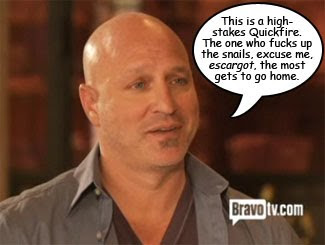 The winner of the challenge gets immunity, plus an extra super-special bonus to be named later.

The chefs get full rein of Boulud's kitchen and pantry and they scurry off to torture the wee gastropods into something that resembles food. Ashley is nervous, but DoucheyMike is stoked. His cooking background is Greek, and he says snails are a popular delicacy in Crete. Good for them. Hector goes for Caribbean flavors (snail ceviche maybe?), and Mattin continues to piddle with glee. He says l'escargot are his whole youth, which has me picturing him as a child going out to play, wearing a shell on his back. With the red scarf, of course. 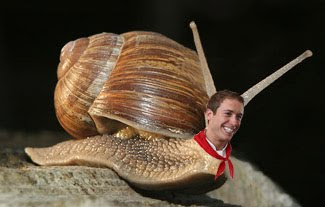 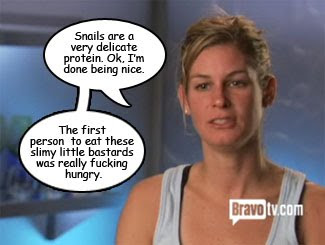 If you slather something in enough garlic butter it suddenly becomes edible.

Knives down, hands up! The chefs bring out their dishes for Tom and Chef B. to try. Now, you might get on my case because I like to make fun of zee Frawnch. Ok, maybe you won't, but I'm sure someone out there doesn't like it. But honestly - they beg to be mocked. I swear Boulud said this: 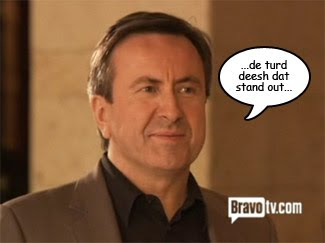 Anyhoo, their three favorite dishes belong to DoucheyMike, to Jennifer, and to Kevin. Kevin is awarded the win, largely on the presence of something he calls "bacon jam" on his plate. Fucking brilliant, that Kevin, even if he looks like an extra from Lord of the Rings.

The bottom three are Ashley, Robin, and Jesse. I can't remember which of them was "da turd" (in this case, perhaps all three). Because this is a High-Stakestm Quickfire, they have to do battle yet again to find out which of them is the biggest loser of all. 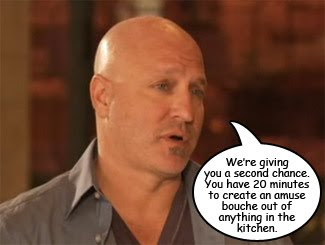 Anything? If I was a smartass (and I am) I'd be so tempted to whip up something with moldy sponges and dish detergent, but that would probably land my tuckus on the street.

Ashley, Jesse, and Robin scurry into the kitchen and whip up their amuses. Robin does soup, Ashley goes full-French with foie gras, and Jesse plays with quail eggs. 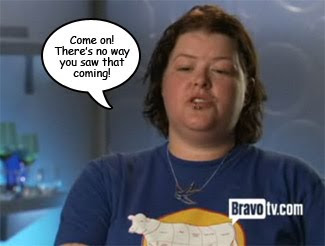 When Jesse leaves, the knife block comes out and the remaining cheftestants, except for Kevin, draw knives. Each sharp cutting implement has the name of a favorite Frawnch protein or a classic Frawnch sauce. The chefs pair themselves up to create a six-course meal:

And if that's not French enough for you, here's where the Frenchitude gets cranked up to 11: this meal will be served to Hubert Keller, Laurent Tourondel, Daniel Boulud, Jean Joho, and the magnificent, the stupendous, the Frenchiest French Chef of them all--Joël Robuchon...

...plus Kevin. He is not only immune from elimination, he doesn't even have to cook. And he gets to dine on his fellow cheftestants' creations, even though he's not French. With a name like Gillespie, he's Irish, which is basically the opposite of French.

The cheftestants have 2 hours in the Top Chef kitchen and then 1 hour in the kitchen of Jöel Robuchon at the MGM Grand. But first - a thrilling trip to Whole Paycheck! 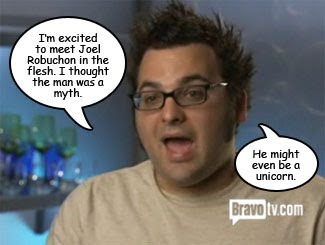 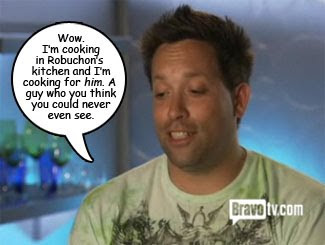 Obviously these guys have never watched the original Japanese version of Iron Chef in which Robuchon judged some Frenchy battle. He exists! And the horn in the middle of his forehead is hardly noticeable.

Time for the great feast! The cheftestants head over to the MGM Grand, home of Joël Robuchon, the restaurant. 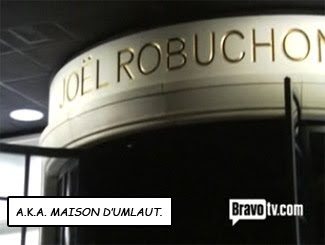 The chefs get one hour to scurry around in Robuchon's cute black-and-white tiled kitchen. Then each pair of chefs gets to present their dishes to the assembly of French Culinary Superheros, plus Tom, Gail, Padma, and Kevin of the Rings. 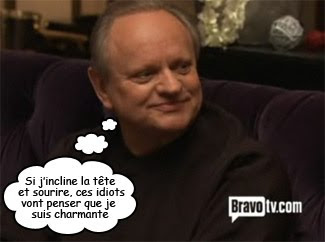 Padma introduces the herd of Frenchness and saves Robuchon for last, like he's some sort of demi-god. I think he looks like a toad. 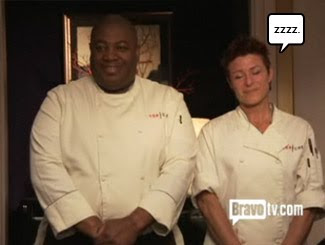 Ron and Robin go first. They are overwhelmed. And their frogs' legs are both over-cooked and over-breaded. 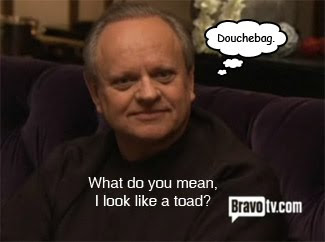 Bryan and DoucheyMike go next with their warm cured trout and deconstructed Bernaise. It was deemed simple, yet really sophisticated, and Joël liked it a lot. (Damn, aren't I impudent, calling the man by his first name?)

Eli and Laurine then presented their lobster with sauce Américaine. The lobster was predictably tough and the sauce was bitter. Joëlarino wasn't pleased. 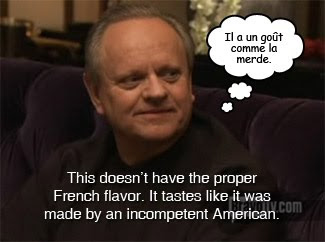 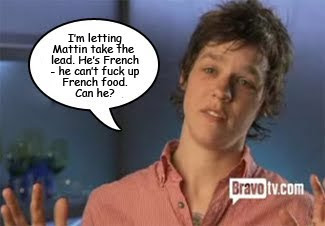 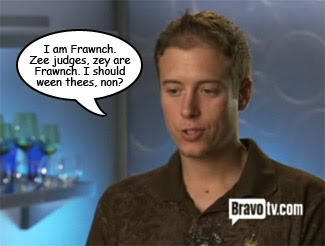 Their poussin and velouté was not well-received. There was too much bacon in the sauce, and the chicken was dry.

Jen and BrotherMike go next with their rabbit in sauce chausseur. Tom thought it was mature work, and the Joëlmeister said it was a successful dish, cooked perfectly.

Finally, we have Ash and Hector with their chateaubriand au poivre. It sounded to me as if Ash mispronounced "chateaubriand" as "shot of brandy" but maybe he was just suggesting that he needed a drink.... 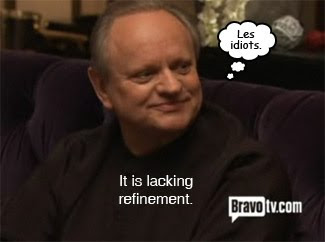 Hector had trouble cooking the meat to temperature and waited until the very last moments to plate it. By that point, the sauce had been sucked up by the rest of the elements on the plate, so that particular and very integral element wasn't evident to the judges. Also, the meat was cooked unevenly, wasn't allowed to rest long enough, and Gail's piece looked as if it had been hacked off the roast with an axe.

As if that was a bad thing.

Meal ordeal is over - time for Judges' Table. Of course, Padma has to make herself sound as morose as possible as she calls Bryan, DoucheyMike, BrotherMike, and Jen out for judging. All four of them know they did well and pat each other on the back. Overall, the judges like Bryan's trout the best and give him the win. And as a bonus gift - he is invited to stage at Joël Robuchon. Seems like a fabulous opportunity, but a stage is basically an unpaid internship in which the intern follows a chef around the kitchen for a while, observing. But in all likelihood, Bryan would be following around whomever is the executive chef at Joël Robuchon. I doubt Joëlarooni himself even goes into a kitchen anymore. 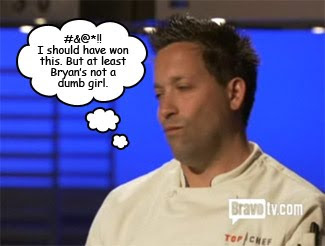 The winners go back to the Glad Stew 'n' Booze Room and call out the bottom teams: Ashley and Mattin, Ash and Hector.

The judges criticized Mattin's velouté as being too close to gravy and being a case in which using bacon was not a good thing. What? How is that even possible? 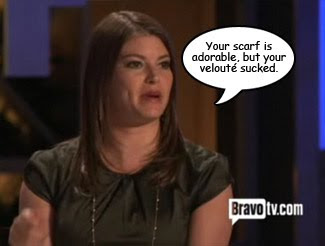 They then turned to Ash and wondered where the sauce au poivre was and why the meat was not allowed to rest properly after cooking. Boulud tells Hector that a chateaubriand should take about 30 minutes in the oven whereas he had an hour. And Gail once again complained that her slice looked like it had been hacked off the roast by a caveman.

Ultimately the beef lost it for Hector. 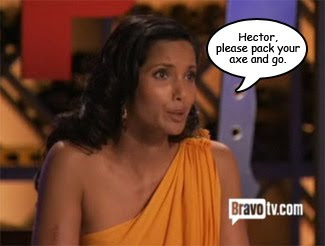 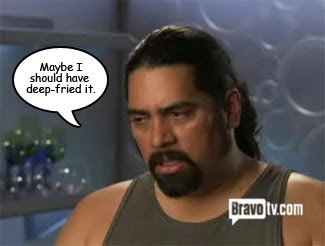 The Engineer wants to know when they will showcase British food. The Engineer fondly remembers tinned steak.

LOL! I couldn't wait for your recap of this Tres Frawnch episode - and you did not disappoint!!

Extra LOL @ Joel Robuchon looking like a toad/frog. You NAILED it!

aarg. I missed it last night, so just went to the bravo website to see when I can catch it. And there on their home pages is a giant photo of the two losers. Uggg.

But at least I get to read this today!

Fabulous recap as always. Was it just me or did Eli refer to him as Daniel Bow-lood? Even if he's from Atlanta he ought to know how to pronounce the guy's name. Also, I couldn't tell in the Quickfire whether DB saying a dish was "interesting" was a good thing or not. I'll have to go back and watch it again.

Happy to see Bryan win since he's a local for me. Seems like he and his brother don't care much for each other, though.

MCWolf - you're in Frederick? Have you eaten at Volt? I'm in Baltimore - I consider him local as well. :)

another good one Minxie!!!! I always forget to watch this show! and last week...I FORGOT Project Runway! WTH?? What kind of a Gay am I? ;)

Hector should have made the meat "cronchee!"

I thought 'red riding hood kerchief bacon frenchy boy' was gonna go. And his accent still has me wondering if it is fake even if he did speak in french last night.

And I think the toad Jöel Robuchon is hanging out in my pumkin patch.

Only the french could fuck up bacon!
Momma G used to say she could get by with serving turds if she wrapped enough bacon around them.
Somehow, that memoire seemed immediately appropriate! And can you BELIEVE Tom said "Please pack your knives and LEAVE!??? It's GO, you moron!

Forget toad/frog and unicorn, I think Joel Robuchoun looks like Joe Pesci, circa Lethal Weapon 3. Otherwise, you are spot on, as usual. Brilliant!

this was a good one. did i miss this or is kevin gay?

Beth - I'm an even worse gay than you ...I almost preferred watching the football game last night to watching PR!

Anonymous - I don't think his wife would be too happy about that.

Tom was on with Andy Cohen's show last night and he claims he said "leave" on purpose, because pykag is Padma's line.

I will miss Hector and his hard to understand accent. Great recap once again. Love it.

You are the bestest, sister!

Reading this excerpt from your blog was funny, dear.

minx: Love the recaps! Didn't you think Hector turning on his heel and stalking out was rude? At least ungracious? I mean, this IS a competition (drink!). p.s. I'm in Laurel - hi!!

Hilarious! The laughing snail was a nice touch!