Sorry this recap is a little late, but I was having fun in Noo York City. :)
The episode starts out in the cheftestants' digs, where BrotherMike says he doesn't think that some of the remaining chefs are as talented as some of the already-eliminated chefs. And Mattin, who possesses extreme Frenchitude, thinks he should have fared better in last-week's Battle of zee Frawnch. Hon hon hon!

The cheftestants get their asses in gear and head to the hallowed Top Chef Kitchen where they find Padma with some cowboy Top Chef Masters competitor Tim Love, of the Lonesome Dove Bistro in Fort Worth, Texas. Yee haw! 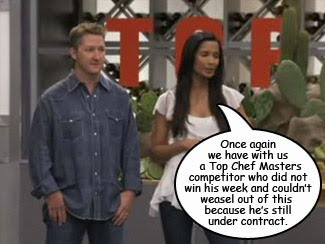 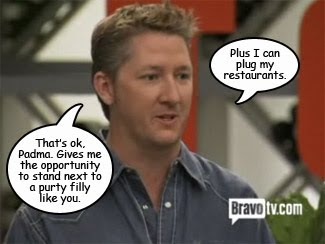 Padma tells the cheftestants that the ingredient they must all use in this week's Quickfire was picked by the home audience. Out of the choice of rattlesnake, cactus, or kangaroo, they chose the most prickly ingredient of the three. Personally, I think wrestling with live rattlesnakes could have been some real TV gold. 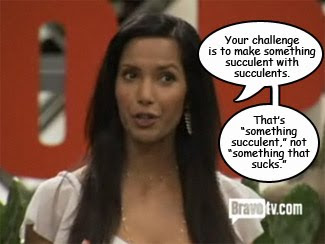 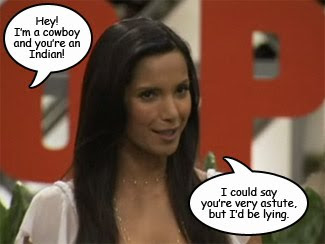 This is one of the ever-popular High-Stakes Quickfires in which the winner gets a chip worth 15 thousand big ones. And the loser gets bragging rights for being in the bottom three for the xth time.
Cactus is an unfamiliar ingredient for most of the cheftestants. 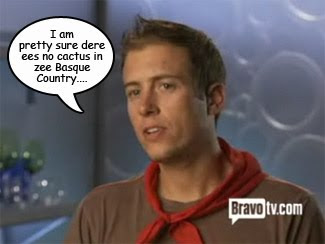 Really? But I can picture fields of cactus, each decorated with a red neckaircheef....
DoucheyMike, on the other hand, has played with cactus a lot, and had an interesting take on its preparation: 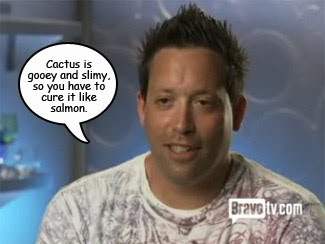 Hmmm...if we bury him in a mountain of salt, would it "cure" him of his douchitude?
Mattin just seems grossed out by the whole thing. Isn't he a delicate creature? 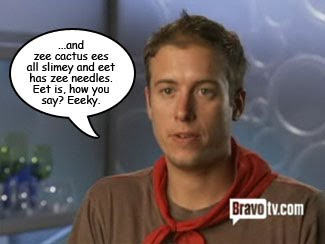 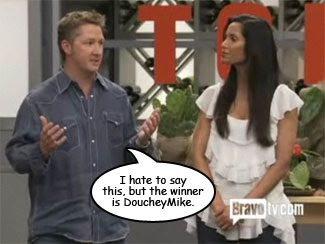 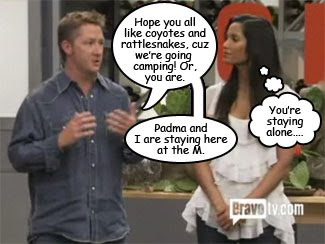 The cheftestants will be preparing lunch outdoors for two dozen cowboys. They can make anything they want, as long as it's high end. But first, a trip to Whole Paycheck. 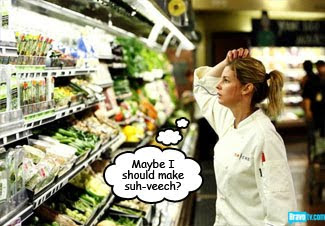 While shopping, Laurine (who?) tells us she's quite the MacGyver when it comes to cooking, so she heads right to the housewares aisle to pick up a box of matches and several rolls of duct tape.
After shopping, the cheftestants head to the camp site, Sandy Valley Ranch... 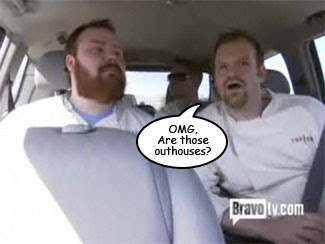 ...out in the Nevada desert. 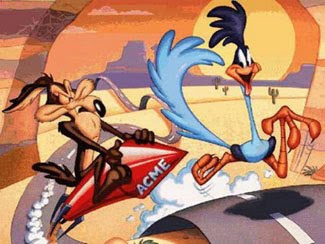 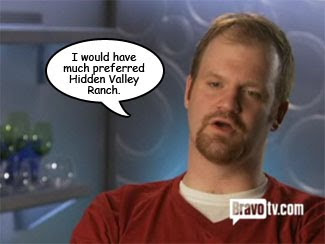 When they see they have to cook over fire pits, and there are only a few cast iron pans, and no GE Monogram appliances, the chefs start bitching. 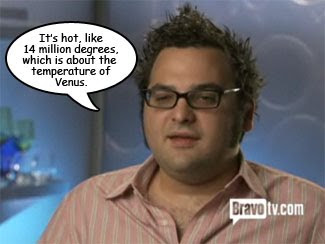 Actually, the temperature of Venus is only about 467°C. 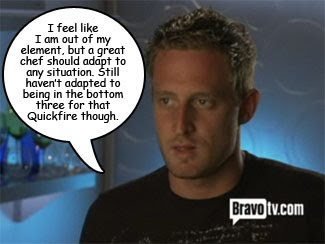 But before the chefs can get cooking, they have to spend the night. In tents. With outhouses. 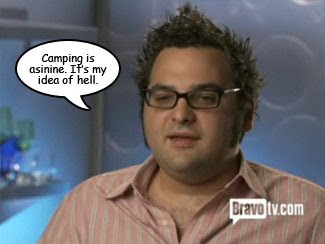 Chubby city boys don't much like to get all sweaty, do they?
The next day, the cheftestants have an hour and fifteen minutes to prep and cook their "high end" cowboy chow. Some chefs continue bitching, but others take it in stride. 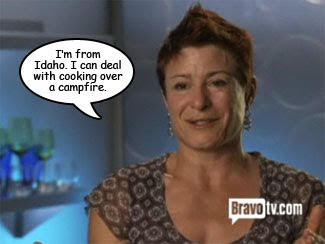 And Mattin looooooves le camping! They apparently do that all the time in ze Basque Country, wees or weesout zee cactus! 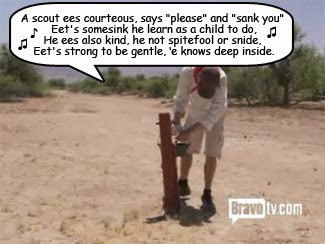 He even knows all about zee camping food, like zee s'mores. And...ceviche? 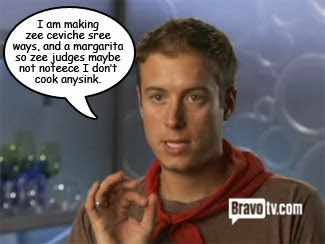 Every time someone makes ceviche (which happens at least once a week) I flash back to the time that Tom bitched out hunky Sam Talbot for making ceviche because it wasn't actually "cooking." 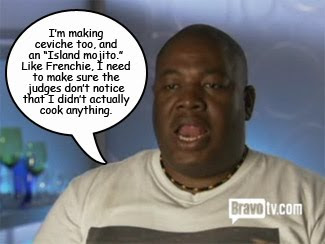 That's right - serve 'em raw fish and get 'em drunk out in that desert sun. Smart. 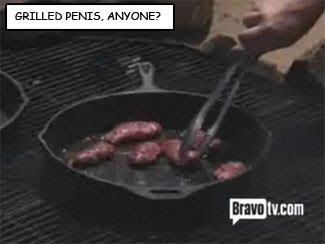 Will someone please give these cheftestants a science lesson?
Finally, time is up and lunch is served. A motley crew of cowboys and cowgirls show up for chow, as do the judges from Noo York City. Here's a quick rundown of the commentary: DoucheyMike's gyro has no pizazz and is uninteresting. Laurine's (who?) MacGyvered arctic char and salsa with potato was pretty good. Eli's tuna sandwich was not flavorful. Mattin's three-way ceviche was so bad, Tom spat it out. Ash's chicken with succotash was a more sensible dish, but not great. Robin's salad with shrimp was terrible. 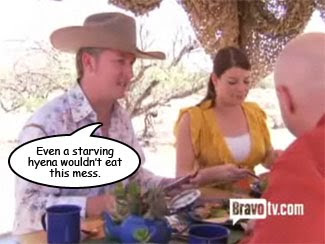 Bryan's pork loin and polenta was a nice plate and it tasted good. Jen's snapper and duck confit was also well received, as was Ashley's halibut "club." Ron's version of ceviche was too sweet but otherwise ok, but his cocktail was nasty. Kevin's roasted duck was well cooked. And finally, BrotherMike's cod and watermelon was very tasty and refreshing. 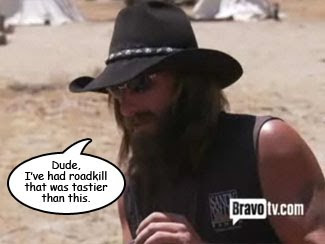 The reluctant campers then pack up their site and head back to the Glad Family of Products Stew and Booze room where they apply aloe to their sunburns and bitch about the heat. Padma comes in and requests to see Laurine (who?), Ashley, BrotherMike, and Bryan. 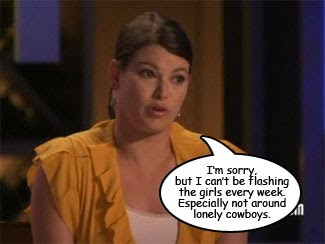 Gail was impressed that Bryan's dish was so perfect. And BrotherMike's dish was unexpected. Ultimately, Tim Love awarded the win to Bryan, much to the chagrin of his little brother.
On the bottom were Robin, Ron, and Mattin, who provided the most disappointing dishes at the ranch. Mattin seemed surprised that he was on the bottom, as he thought his "sree-way" of ceviche was supérieur. Unfortunately, some cod got cooked by the citrus juice, and some didn't. 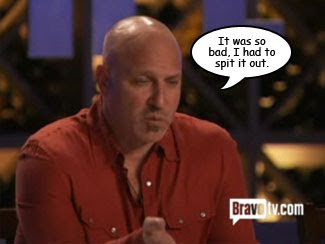 Tom claims it actually made him sick. 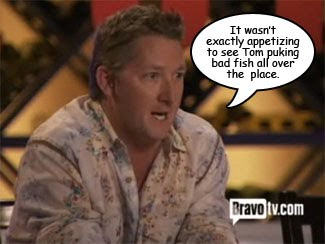 Although Robin's shrimp tasted like chlorine, and Ron's "mojito" was vile, Mattin's cluelessness got him the boot. 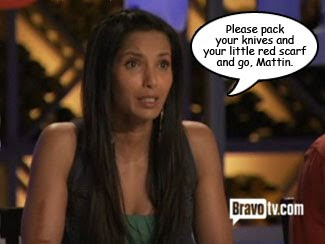 I love your blog! I am sick of seeing ceviche on TC. COOK SOMETHING!!!

I'm getting hooked on your recaps, minx. This one made me laugh out loud.(Who?)

We even felt sympathy stomach pains here for all that fish in acid in the heat. ak!
Great recap, Minx!

Red kerchief fake frenchie is gone. Who am I gonna bitch about now? Adios or I should say "au revoir!"

I am so done with the ceviche.

ceviche is the new dessert on Top Chef. If you "cook" it, you will pack your knives!

also...isn't Gyro pronounced YEER-oh not Jee-row? DoucheyMike is a chef in a Greek restaurant but mispronounces such a Greek staple? how Douchey...

Excellent recap again. You're hilarious! Looking forward to reading your blog next week!

Love your recaps!! Hilarious about Mattin! All of it - entertaining and spot on!!

I can't hardly cook for shit, but even *I* know not to serve raw fish in the heat. Are these people really professional chefs??

I get at least one LOL and numerous chuckles out of every recap. I love you, Sister-Friend!

With Frenchie gone, it will be difficult for you to include "hon hon hon!" in your recaps from now on. This saddens me, because "hon hon hon" never fails to make me giggle!

Excellent job! And it was wonderful seeing you and the cute Hubs!!!

Did you catch that when they left the ranch, someone (I think it was Ash) was made to carry a giant box of Glad Wrap, and he looked like he felt really stupid doing it, but they made him, for product placement. (drink!)