Mix all ingredients in a sauce pan and bring to a boil. Turn heat to low and simmer until thickened and flavors are blended, 30 minutes. Adjust salt and pepper as desired. Makes about 1 1/2 cups.
Yes, the resulting sauce was blue. I mixed it up with some shredded pork shoulder. And the pork turned blue as well. Blue BQ. 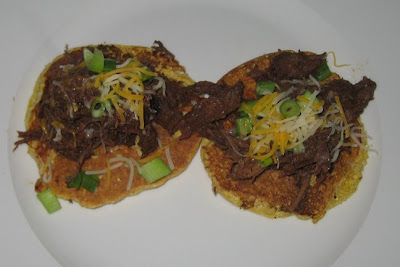 I had read on another food blog a variation on hush puppies based on the recipe in the July '09 Food & Wine magazine - Hush Puppy Corncakes. I love hush puppies, but hate the idea of deep frying, so decided I had to try this one. Except, when I read the recipe, I thought, "hush puppies don't have oregano! ack!" I checked my dog-eared copy of The Joy of Cooking and found a more authentic recipe, one with ground onions as the flavoring component. And that's the recipe I used, thinned out a bit with more milk.
It was awful. The cornmeal was too gritty, and cooking them pancake-style on my skillet with very little oil made them dry. And, despite the copious tears produced while grating 1/2 cup of onion, the onion flavor was non-existent. Topping them with the Blue BQ helped a bit, but not enough. Although my friend Kate and Mr Minx said they were fine, I was not happy. Next time I make corncakes, I'll use my usual box of Jiffy cornbread mix....
What did make me happy was the batch of gazpacho I whipped up. I cheat and use canned tomatoes, roasted red peppers from a jar, and a cucumber. This time I used a can of fire-roasted tomatoes, which added an extra dimension to the flavor. Seasoned with sherry vinegar, green Tabasco, a pinch of cumin, and a dribble of honey, it was divine. And fast. 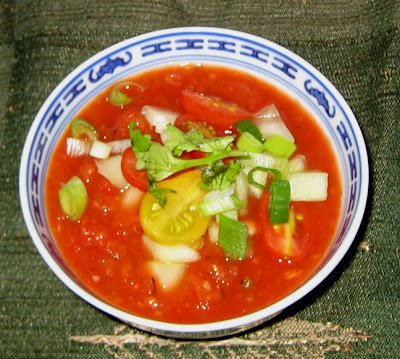 Oh, did I mention I made this all for lunch last Wednesday? Yes, I did start cooking at 7:30 am...lol
Posted by theminx

I had no idea when I invited myself to visit on Wednesday that you were going to get up at the crack of dawn to make lunch! The gazpacho WAS divine! I could go for some right now. The Blue-B-Q was delicious as well, and the corn cakes were not as bad as you make them sound. Smothered in blue pork, they were fine!

Thanks again for a wonderful meal. Feel free to invite me any time you need a guinea pig for a new recipe!