My Take on a Kashi Frozen Entrée 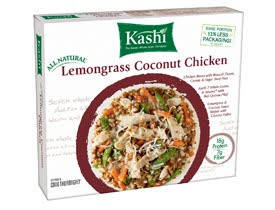 Why does "healthy" food have to taste so bad? I had a Kashi Lemongrass Coconut Chicken frozen entrée for lunch the other day. I'm not a big fan of frozen entrées in general (most of them taste awful and reek of onion powder) but this one was free so I tried it.
The package boasts "same portion 11% less packaging." While that may be eco-friendly, I have to wonder about the inks used to print the box - they have a harsh chemical smell. I do not recommend using the flattened box as a trivet for the hot meal. Just toss it directly into recycling.
I feel pretty much the same about the food. There was a very strong, almost overpowering lemongrass flavor, rather like a mouthful of Pledge. The multi grain pilaf had too many textures, all of which were crunchy; this was only exacerbated by the crunchy vegetables and crunchy coconut flakes. The texture of the chicken, on the other hand, was very tender. But, being boneless, skinless breast meat, it didn't have a lot of flavor of its own to help balance the lemongrass. Although the dish had 680mg of sodium, I would say it wasn't salty enough. In fact, if one took away the lemongrass, the dish would taste like...nothing.
I'm going to go back to disliking frozen entrées now.
Posted by theminx

I agree, most frozen food is pretty horrible. I actually kind of like the Amy's Organic Bowls (http://www.amys.com/products/category_view.php?prod_category=12). I take them to lunch fairly often. The country cheddar is good, as are the Mexican casserole, stuffed shells and pesto tortellini.

I don't think I've ever tried one of Amy's bowls, but the burritos are decent enough. I saw there was a thread on Trader Joe's entrees on eGullet, but I haven't read it yet.

Luckily, we usually have enough dinner leftovers to make a lunch or two during the week.

I like Amy's as well - and I do want to try the Kashi so I hope the one you tried is just an aberration; I tend to like most of their other things . . .

I've tried several of the Kashi frozen meals (they were on sale - I was on a diet). They were all bad - very bland.