When I was a kid, I loved when my grandmother made lopatka (wo PAH tka), or pork shoulder. She would most often buy it cured and cook it with cabbage. Although I liked the meat part (it was much tastier than plain ol' ham), my favorite part was the skin, which became meltingly tender during the slow cooking period. Most often, we would allow the men in the family to eat the meat, while the women -- Grandma, Mom, and myself -- would happily eat the slightly gelatinous-textured skin with some buttered rye bread and a good helping of stewed cabbage.
I miss those days.
A few weeks ago, I spotted partial boneless shoulders in the meat case at H Mart and bought a small chunk; I figured it would be good for making pulled pork. But this weekend I decided to use it to make some Chinese red-braised pork, using the recipe from Fuchsia Dunlop's Sichuan cookbook, Land of Plenty. 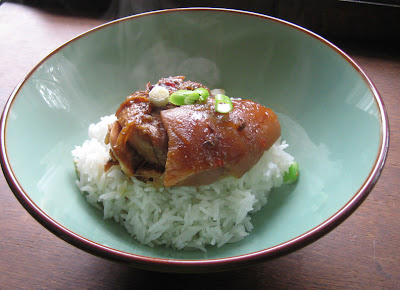 The recipe calls for pork belly, which I also had in the freezer, but after looking at the skin on the shoulder, I decided that's what I really wanted to eat.
I originally made the recipe as written, but it wasn't salty/sweet/savory/star anise-y enough for me, so I added more sugar, dark soy, and star anise halfway through the cooking time. The results were delectable...just look at that glistening bit of succulent skin. Mmmmm! 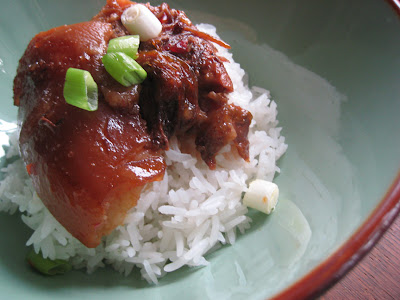 Red-braised Pork (adapted from Land of Plenty)
2 lb pork shoulder with skin
a 2" piece of fresh ginger, unpeeled, crushed slightly
3 scallions, white and green parts, cut into 3 or 4 sections
3 cups chicken stock
3 T dark soy sauce
2 lumps Chinese rock sugar, or 3 T of brown sugar
3/4 t salt
2 whole star anise
1 T Sichuan chile bean paste (optional)
Blanch the pork for a couple of minutes in boiling water, then remove and rinse in clean water. Place pork in a Dutch oven with the rest of the ingredients and bring to a boil. Turn heat to low and simmer for about 2 1/2 hours until meat is fork tender. Remove meat from pot.
Turn heat up and boil sauce for several minutes until it thickens. Taste for seasonings and add more soy or sugar as needed. I decided to make it a little spicy and added a tablespoon of dou ban jiang.
Turn temperature back down to low, and add meat to pot. Simmer for an additional half hour or so. Serve with rice or noodles and a vegetable stir fry. Be sure to eat some of the skin.
Posted by theminx

Since the indgredients are in my pantry....I shall do this tomorrow, sounds yummy and I love it spicy~

Your blog is so attractive and impressive and i need to appreciate you for sharing the useful information to all.

I love eating fatty pork...everybody else always seems to cringe...:-)

Lots of people cringe at the thought of eating fat because we are constantly being told that it's bad. But it tastes so good!