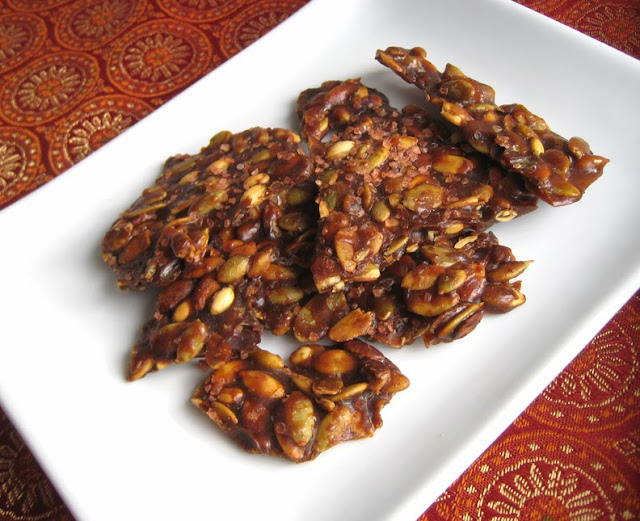 In 2012, I made caramels for the first time; they turned out so well, I promised myself I'd try other candies in 2013. I don't know why I drive myself so crazy with making holiday treats, but I do (especially considering how few gift recipients I have). I'm sure cookies and fruitcake would suffice, but even more sweet stuff is better, right? Fudge! Brown sugar caramels! Mini chocolate orange loaf cakes! Bacon jam! And pumpkin seed brittle!

Why pumpkin seeds? Because my dear brother has nut allergies, but can eat seeds. I searched the Interwebs for a fairly simple recipe and came up with this one at Food 52. I didn't have enough allspice on hand, so rewrote the recipe using the amount I used. I also added a bit of cayenne pepper, for a nice kick.

A few days after Christmas, my Dad called and said, "What is this stuff I am eating? It's crunchy and spicy and like heaven in my mouth!" So apparently my alterations were a hit with the parental unit. I thought it was pretty fabulous, myself.

If you try it, don't skimp on the salt.

Pour the pumpkin seeds into a dry skillet. Turn the heat on to medium-high and toast seeds, shaking pan frequently, until seeds have started to turn from greenish to brownish and are plump. Remove from heat and pour seeds on a plate to cool.

Measure out the spices and toss with cooled pumpkin seeds.

Combine butter, sugar, and maple syrup in a saucepan over medium heat. Using a candy thermometer, boil mixture until it reaches 280°F. Carefully pour in seeds and spices and stir. The mixture may clump up a bit but keep stirring until it smooths out. Continue cooking over medium heat until the thermometer reads 300°F. If the mixture smells like it's burning before it reaches 300°, remove from heat anyway.

Once the candy has reached 300° (or smells like its burning!), pour onto a Silpat-covered cookie sheet and spread out to a thickness of about 1/8" - 1/4". Sprinkle with sea salt while it's still warm.

When completely cook, break into pieces. Store at room temperature in tightly covered containers for a week or two.