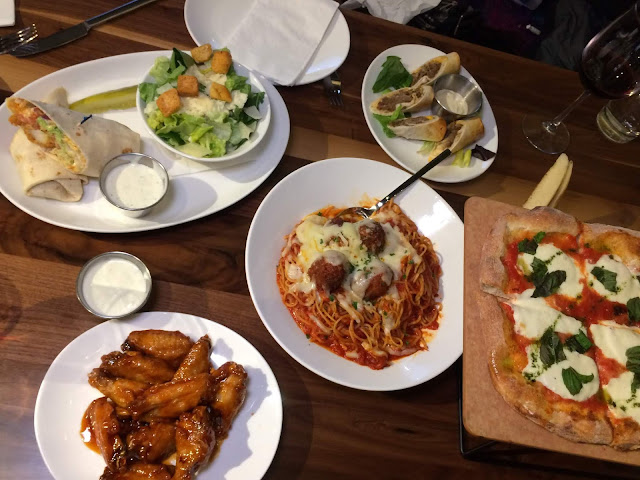 Any place that serves good pizza and is within reasonable driving distance is going to become one of our regular dining destinations. Add a selection of salads, pastas, sandwiches, and wings (in the rare case that one of us doesn't want pizza), and we have Pat's Select.

Pat's is a small regional chain out of South Jersey that has so far branched into Delaware, Pennsylvania, and Maryland. The Cockeysville outpost, which is closest to us, opened in the second half of 2018. On our first visit, Mr Minx and I were treated to a selection of Pat's most popular options, which included the margherita pizza, cheesesteak roll-ups, and wings. We were also urged to order whatever else from the menu we wanted to try, so we opted for a wrap and a pasta dish.

The cheesesteak roll-ups, from the appetizer selection of the rather voluminous menu, consist of flour tortillas filled with sliced steak and melted cheese and come with a creamy horseradish dipping sauce. They were hot and tasty and good for sharing. Pat's wings come in both bone-in and boneless varieties and can be tossed with any of six sauces of varying heat levels, or naked. We went for the "blazing bourbon," which provided just the right amount of sweet heat.

Pat's pizzas are long, rather than round, but there is a thick crust round pizza available. All are baked in a blazing brick oven visible from the dining room. There are two sizes, the 15" x 7" being more than enough for two people and the 24" x 11" being, well, gigantic. There are all the usual toppings, but also specialty pizzas with pulled pork or buffalo chicken and bleu cheese. We had the margherita, a simple affair of fresh mozz, good sauce, and extremely fragrant basil on Pat's light crispy crust. Mr Minx and I are fussy about pizza. We like what we like, and we hate everything else. There's a lot of mediocre pizza out there, and about as much bad pizza. Pat's is good pizza, however, which means we'll be going back. Possibly often. They also have strombolis, and two oven baked sandwiches, one involving chicken parm, and the other, meatballs.

We tried Pat's meatballs atop a mountain of spaghetti baked with marinara and cheese. Honestly, we didn't really notice how much pasta was in the bowl until we took the leftovers home and had them for dinner the next day. Mr Minx can eat a LOT of pasta, and there was enough left over that he was able to share it with me. But back to those meatballs...they were very nice. Not too soft, not too cheesy, but just right. They'd be great in that oven baked meatball sandwich I mentioned in the previous paragraph, and I do intend to try that in the future.

Last but not least, we tried the Sriracha shrimp wrap, a flavorful combination of breaded and fried shrimp with avocado, red onion, tomato, cilantro, and sriracha aioli. I'd eat that again. However, there's a ton of other stuff on the menu to try first. They have crab cakes! They have many many salads, burgers, steak sandwiches, other wraps, more pasta, fries, even gyros. It'll be a while before we can say we've tasted something from every major category on the menu. I'm thinking that will be a fun endeavor.