I was a bit of an over-achiever in high school. Ok, so that's not true at all, but it certainly seemed that way in this instance. 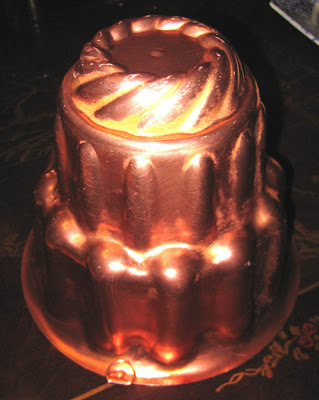 I found the copper mold I had used originally and realized it had a 6-cup capacity. As I was cooking the rice, I knew it would never fill such a large mold. What to do? Luckily, the rice seemed to need more than 1 1/4 cups milk to reach a properly tender state, so I added an additional cup, a bit at a time. To compensate for the additional liquid, I added 1/4 sugar to the egg mixture. And I thought, what the hell - I'll whip the whole damn pint of heavy cream rather than just half of it. And it fit the mold perfectly.

Needless to say, I skipped the icky glacé cherries and candied fruits; of course that meant I couldn't use the booze. That's ok - my high school friends didn't get any either. At least - not in my dessert.

Now, unmolding creamy desserts can be a tricky thing. One must gently heat the mold to melt just enough of the gelatin to allow the filling to slide out. Too much heat and... 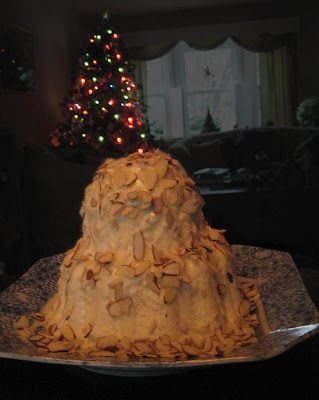 Ah...toss some toasted almonds on top and who's gonna know? (I have no idea how I unmolded the thing successfully at school.) What really matters is the taste - so rich, so yummy - possibly the best rice pudding ever. At least, according to Mr Minx. :)