Several months ago, I was reading an issue of New York magazine featuring all the hot new places to eat in the Big Apple. I felt a little smug about the fact that I had already eaten at Gato, the latest Bobby Flay restaurant that the magazine was heaping praise upon, It also mentioned a quirky new place called Ivan Ramen. Ramen is something that has recently taken off in the Baltimore area and, since it involves noodles, is certainly one of my favorite dishes. Ivan Ramen features an inventive mix of east-meets-west dishes, especially their appetizers like the L.E.S. bun featuring pastrami, karashi mayo and daikon slaw. Since the Minx and I were already planning a trip to New York in the fall, I made a mental note to put this on our list of new places to dine.

Fast forward to October and we were on our way to Gotham with our itinerary plotted out, including lunch at Ivan Ramen as soon as we arrived. There are two locations for Ivan Ramen and we chose the one on the Lower East Side because there was another restaurant nearby that we also wanted to try out; sort of a movable lunch. After checking into our hotel room in Midtown, we hopped on the subway and rode down to Ivan Ramen. I asked the Minx if she wanted to try any of the appetizers, hoping she would say yes. She did not say yes, however, reminding me of the other restaurant we were going to visit afterward. We're pretty piggy, but we don't like to make too big a point of it. Mildly chagrined at the prospect of a L.E.S. bun-less meal, I focused my attention on the ramen. 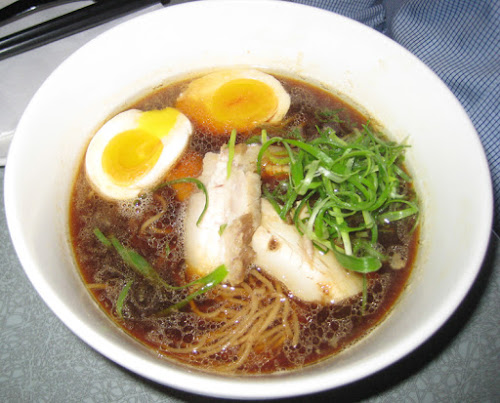 I settled on the Tokyo Shoyu Ramen. After all, I figured if they were offering so many eclectic dishes, I would see how well they could make a traditional classic. Quite well is the answer. The rich broth was a combination of soy sauce, dashi, and chicken broth. The protein was pork chashu and a perfectly cooked soft egg. I was pleasantly surprised by the rye noodles, something I had never had in ramen before but which provided a slightly more grainy flavor than the usual wheat noodles. 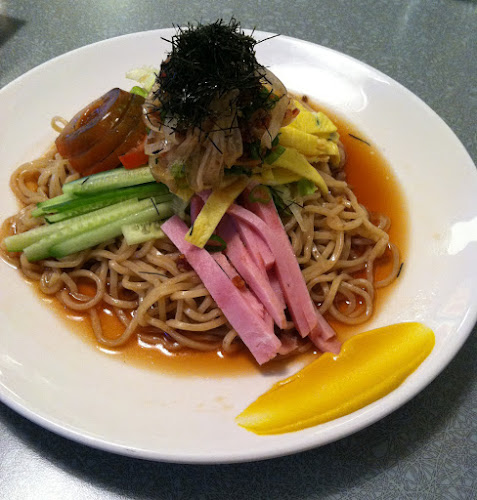 The Minx opted for the Hiyashi Chuka, a salad of chilled whole wheat noodles, smoked ham, cucumbers, tomatoes, romaine, bacon, and vidalia onion sitting atop a pool of malted honey dashi vinaigrette. I was dubious about cold noodles, but they made perfect sense with the crispy vegetables and bright yet slightly sweet vinaigrette. The swipe of mustard on the corner of the plate was extremely spicy, providing the occasional kick when you wanted it.

The meal was an invigorating start, but after our long train ride, I was still hungry for more. We headed off for the second restaurant on our itinerary but, after hiking several blocks and getting turned around a couple of times, we arrived at our destination to discover that it was only open for dinner. Now I was feeling a bit desperate. I mean, yes I had eaten an adequate amount of calories for lunch but, dammit, I was prepared for more! We started wandering around the neighborhood heading back in the general direction of the subway station. I was determined to find another restaurant that was open and serving something worth eating, but I was not at all familiar with area.

Then we reached an open cafe with the words Mission Cantina in the window. I had been following Mission Chinese Food on Instagram for months and was vaguely familiar with this New York outpost. I was about to say something to Minx when she blurted, "Oh, Mission Cantina! Want to try this?" I was glad she approved.

We stepped inside amid the cacophony of punk music and studied their menu on the wall. Although I was oblivious, the Minx spotted chef/owner Danny Bowien lurking in the dining room. I was more interested in figuring out which burrito I wanted. The Minx liked the sound of the fried chicken super burrito and so did I. 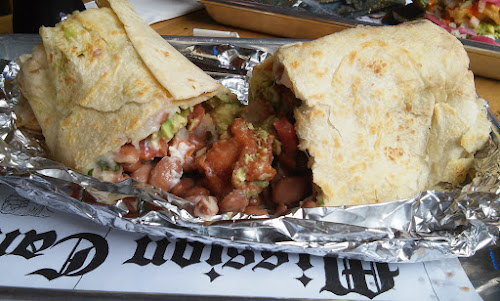 The California Super Burrito with fried chicken, pinto beans, guac, crema, and cheese was almost as big as my forearm. There was no chance of me not getting filled up now. I was surprised at how mildly spiced it was, but given that it was stuffed with chunks of fried chicken, perhaps they wanted to let the fried chicken flavor come through. All the other elements were pleasantly creamy with the occasional crunch of the chicken coating to keep things interesting. 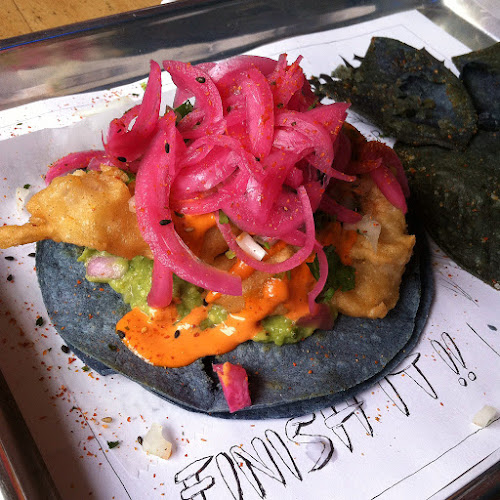 The Minx chose the fish taco with guac, fried skate wing, marinated red onion, and a sauce reminiscent of an Indian pickle. In fact, this unusual hit of Indian flavors really set the taco apart from any fish taco we had ever tasted. While my burrito was dense and sloppy and wonderfully satiating, I really wanted to have three or four of those spicy/sweet tacos.

After washing our burrito and tacos down with a couple of Mexican Coca-Colas, we walked backed to the subway station floating on the comfortable intoxication of two really terrific meals. After all the hustle bustle of buses, trains, and subway cars, I took in the late afternoon vibe of the neighborhood. I don't think I could live in New York, but I certainly envy their food choices.