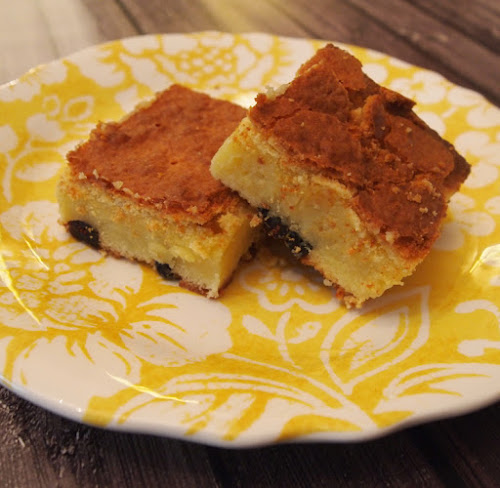 A couple weeks ago, we determined that we needed something brownie-like to snack on. Rather than make our usual Ghirardelli brownies, we made the original recipe brownies from the Fat Witch bakery cookbook. Those brownies have more butter and sugar than chocolate or flour, and are very tender and moist rather than chewy or cakey.

After polishing off that pan, I wondered how a white chocolate version would work. For some reason, we had 2 1/2 bags of white chocolate chips in the cupboard; I must have purchased them for some reason but have no memory of it. That's what happens when you get old, folks. So we tried it. Not only did we substitute white chocolate for semi-sweet, we also lowered the amount of sugar, flour, butter, and eggs by small increments.

Mr Minx said, after eating a couple, "I think I prefer them to the chocolate version," and our friend Fran said, "these are addictive." I said, "mmmfgmbbmmm!" (Because my mouth was full.) Despite calling for one less egg than the original version, these tasted eggy, like a custard in cake form. They were very moist in the center, even when cold from the fridge (though I recommend eating them at room temperature).

The batter is very runny, due to the amount of butter and eggs, so any add-ins will sink to the bottom of the batter. For that reason, it's probably best to leave them out; I only include them in the recipe because I used cranberries and pistachios when I baked the bars. You can clearly see the dried cranberries at the bottom of the bars in the photo above. An addition that I think would be completely dynamite is finely grated (Microplaned) citrus zest. Which is what I'm going to try next time.

Fit an 8" x 8" square baking pan with a piece of parchment large enough to cover the bottom and long enough to extend a couple inches above the lip of the pan. Fold the excess paper over the top of the pan and secure with a couple of large paperclips so it won't flop down over the batter (which will be very liquidy, so don't skip this step). If you don't have parchment on hand, you can grease and flour the pan; the cookies will just be a little harder to remove later.

Place butter and white chocolate in a microwave-safe bowl. Heat for 30 seconds, remove bowl from oven, and stir. If the butter isn't completely melted, put it back in for another 15 seconds. Repeat if necessary, but keep in mind that white chocolate will burn fairly easily. Stir vigorously to make sure the white chocolate is as melted as possible. The butter will separate; don't worry about it. Set aside for a few long minutes to cool.

Cream the sugar, eggs, and vanilla until thick and pale. Mix in the cooled white chocolate. Add the flour and salt and mix well until completely combined. Stir in fruit and or nuts.

Spread batter into prepared pan and bake for between 40-45 minutes until a toothpick comes out with only a few moist crumbs on it.

Cool completely before cutting into squares.