Mr Minx and I were in NY recently to celebrate our 15th anniversary and my impending birthday. We ate at a number of interesting and less-expensive-than-usual places, just about all of them of some ethnic persuasion. We also saw a terrific Broadway show, An American in Paris. While looking for a place to have lunch before our matinee, I found Kung Fu Little Steamed Buns Ramen.

While restaurants in the Theater District/Times Square are not particularly known for their haute cuisine (think Olive Garden), this little restaurant with the big name was awarded a Bib Gourmand by Michelin for 2016. The Bib Gourmand is defined as serving "two courses and a glass of wine or dessert for $40 or less." Basically cheap eats. But there are some notable restaurants on the 2016 list, including both Momofuku Noodle Bar and Ssam Bar, Frankies 457 Spuntino, Kesté Pizza & Vino, Prune, and Tertulia. I figured a restaurant in such good company can't be bad. And it wasn't.

Service is prompt and efficient in Kung Fu Little Steamed Buns Ramen's no-frills dining room. There is barely need for a menu, as the restaurant's name pretty much sums it up, but it was nice to receive one with photos of every dish, so we knew what we were getting into. The bulk of the choices are for dim sum-type snacks, with bigger dishes involving ramen or hand cut noodles in soup or stir fries. We had eaten ramen the day before (and several times in the week before our trip), so opted for dim sum in the form of pan-fried Peking duck buns, scallion pancakes with beef, pork and crab-filled soup dumplings, and a cold dish of sliced beef and tripe in chili oil. 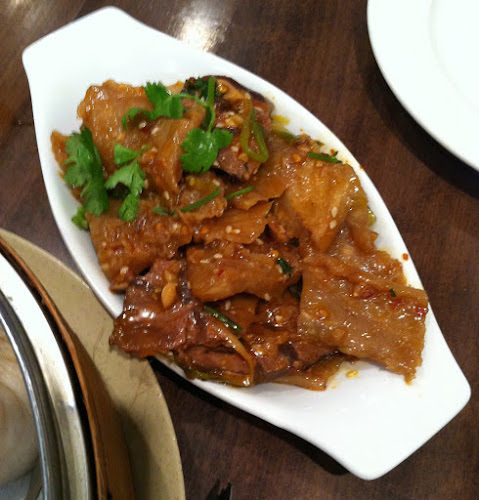 It was all good. The meat in both the buns and scallion pancakes was slightly sweet, which balanced the spice of the beef and tripe. The tripe was cut a bit more thickly than we are used to in similar dishes served at Grace Garden and Hunan Taste, which made it a bit more chewy, but the lightly peanutty chili sauce with the distinct piney-citrus-floral flavor of Sichuan peppercorns had the perfect amount of ma-la (spicy and numbing) heat. 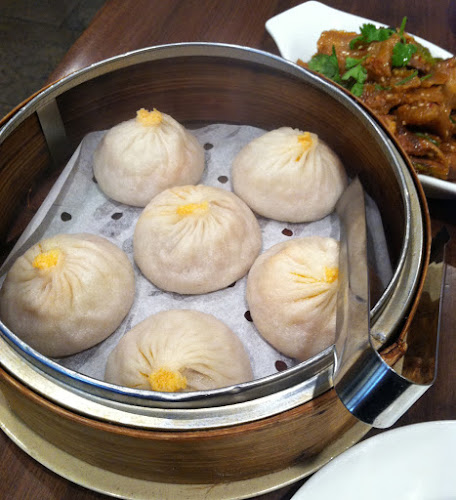 After having scalded myself at my first attempt at eating soup dumplings, I was very aware of the proper method of consuming these heat bombs: using the tongs provided, place a dumpling on the soup spoon; take a tiny nibble of the dumpling skin; suck out the broth before consuming the rest of the dumpling. These dumplings weren't as incendiary as those at Joe's Shanghai, so we emerged unscathed. 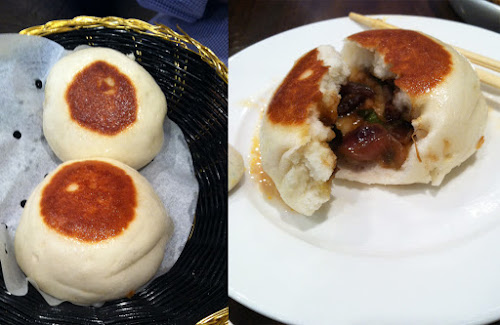 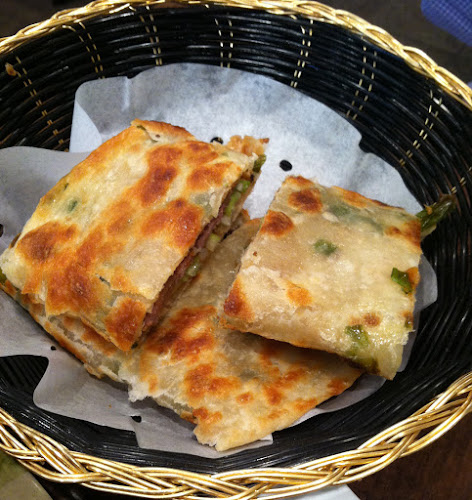 I think I liked the scallion pancakes most, for their crisp flaky exterior and the sweet bite of tender beef inside. It was a nice textural contrast. But everything else was quite tasty as well. It would be nice to have these slightly different options available at dim sum here in Baltimore, but who am I kidding? We're lucky to have any dim sum options at all.