There are lots of Baltimore-area food trucks that serve largely American-style food, like burgers, cheese steaks, grilled cheese sandwiches, bbq, etc. They're all terrific, but sometimes I want something more exotic. More...ethnic. Like traditional Brazilian food.

The first time I tried Darua, I was attempting a vegan diet. Lucky for me, Darua offers a pastel, or hand pie, filled with a medley of tender and juicy vegetables like corn, peppers, onions, collards, and summer squash, all very fresh-tasting. The crust was crisp and light, and made with a dash of the Brazilian sugar cane liquor, cachaça. I had mine with a side of collards; the generous portion of greens was flavored with garlic and only lightly sauteed, which means they were still a bit chewy and bitter. Personally, I prefer long-cooked collards, but these were actually very good. 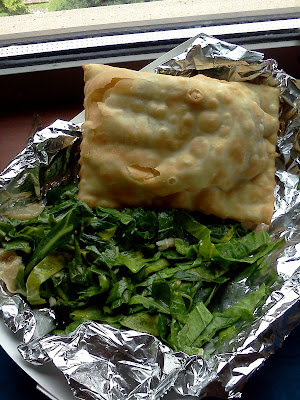 Another time I tried the chicken croquettes (they also come in ham). Crisply fried on the outside, the innards were a creamy mixture of chicken with corn and bits of spring onion. They were served with a container of sauce that was like a tartar or remoulade and not particularly necessary because the croquettes themselves were so moist. 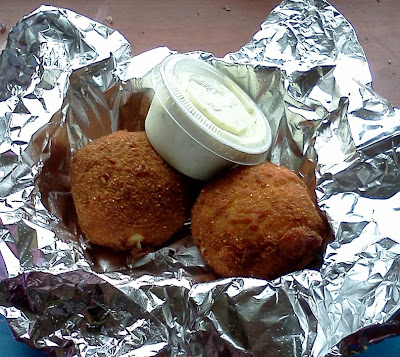 Darua also offers feijoada, the bean and meat dish that's often considered the national dish of Brazil, and espetinho, or meat on a stick, plus sides like black beans and yucca fries. I plan to try the latter the next time, because I do love me some yucca fries (I think they're better than potato fries!).