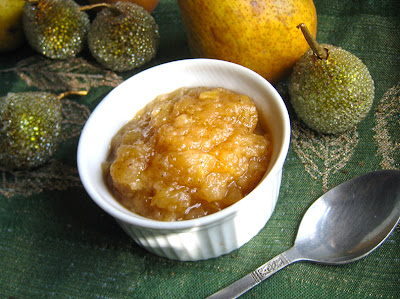 Some people might be intimidated by the thought of making jams and butters and "putting them up." I am one of them. For one thing, I don't have a lot of extra cupboard space for storing jars of fruit and whatnot, for another, I don't trust my ability to sterilize something well enough to prevent botulism. Oh sure, I could probably sell my failed fruits to a dermatology clinic that would shoot them into the faces of people who refuse to grow old naturally, but both the American Board of Dermatology and the FDA would probably have something to say about that.

Instead, what I like to do is make tiny batches of various fruit products, things that can be consumed in a week or so. I make a pint of this and a pint of that and once they're gone, I can make more, or something else entirely. My fridge is usually full of these Crate and Barrel working glasses with lids (the pint size, which they don't seem to have on the site right now), each containing some concoction or another.

One of my more successful ones came when I noticed that three of the large bosc pears I had recently purchased at the farmers' market had soft spots. I didn't want to eat all three pears at once, so I decided to cook them down with some sweet spices. The result is a delicious butter-type spread that can be eaten on toast, stirred into plain yogurt, or used as a side dish for roast pork or chicken. It would also make a nice filling for hand pies or little tartlets. The recipe is also easily doubled or tripled, as needed.

Peel pears and cube the flesh. Place into a saucepot with the brown sugar, spices, and water. Bring to a boil, then lower heat and simmer mixture until the pears break down and are easily smashed with the back of a spoon, about 15 minutes. Turn up the heat to evaporate any excess water, then smash the pears with a potato masher. Stir in the vanilla and salt and allow to cool before eating.