A new-ish truck that seems to do pretty bang-up business (at least when I visited and saw the crowd already waiting at 11:45am), KoCo Korean Fusion doesn't even have a proper sign on their all-white truck, just one that says KoCo taped over the logo of whomever owned the truck before them. It's a fancy truck too, with a full-length window and customer-side bins for dessert and beverage offerings.

The offerings are sparse, but they hit all the Korean dishes most familiar to Americans: japchae (translucent noodles with vegetables and meat), bibimbap (rice with vegetables and meat and an optional fried egg), and Korean tacos or burritos. On my first visit to the truck, when they were still very new, I ordered a vegan version of the bibimbap, which came with kimchi, lots of vegetables, and spicy gochujang sauce, but no protein. Now they have tofu, which makes it all the better. 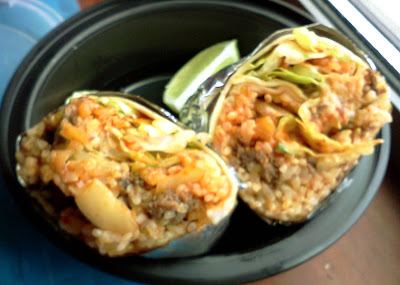 I've also tried the Korean Burrito, stuffed with rice, kimchi, bulgogi, and lettuce and served with lime wedges. It's spicy, moist, and quite delicious. It's nothing like a Mexican burrito, except for the wrapper. I would have liked more meat, but as it was, it's a tasty and filling lunch.