Sometime last spring, Mr Minx and I visited Bagby's for the first time. We had started out eating dinner at another Harbor East restaurant and quickly determined that if we ordered enough food to sate our appetites, we'd be broke before the entrees came out. So we nibbled on a couple of items and beat a hasty retreat to the much more-affordable Bagby Pizza Company in the old furniture company building on Fleet between Exeter Street and Central Avenue. 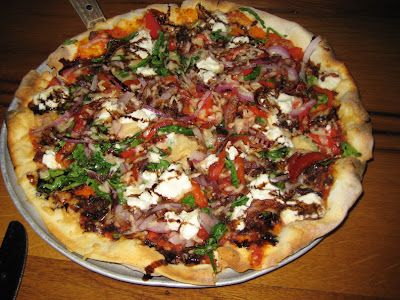 On that trip, we tried a "Sweet & Spicy," featuring spicy tomato puree, spinach, roasted red peppers, red onion, applewood bacon, asiago, goat cheese, and balsamic glaze. It was indeed both sweet and spicy, with a bit of tangy and meaty in there for good measure. It was a perfect balance of flavors. The ultra thin crust was cracker-crispy without being dry, and its lightness made it very easy to eat several pieces without feeling like a pig.

We had intended to go back, but we got busy writing and then promoting Food Lovers' Guide to Baltimore and sort of forgot about it. But then a book signing at the Power Plant outpost of Barnes & Noble, within walking distance of Bagby's, gave us an excuse to go back and try a few more things for a late lunch/early dinner.

Bagby's chop salad was named "best chopped salad" by Baltimore's City Paper in 2011, so we thought we should try that, along with a couple of small pizzas. 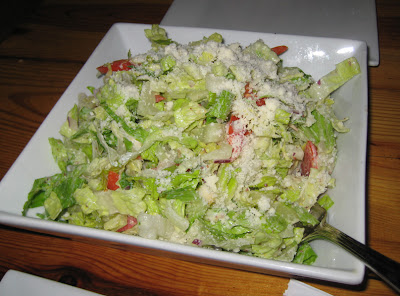 A mixture of romaine lettuce, squash, asparagus, carrots, celery, onions, and tomato was topped with a sherry-shallot vinaigrette and a dusting of Parmesan cheese. We would have liked a bit more of the dressing and at first wondered if they had forgotten to put it on at all.


We tried two pizzas this time. I chose the duck confit and pear pizza, with herb oil, duck confit, bosc pear, caramelized onions, blue cheese, dried cherry drizzle, parmesan, and a generous topping of arugula. Mr Minx thought the duck pizza could possibly be too sweet, so he ordered something on the saltier side of the aisle, the prosciutto and goat cheese pizza, with tomato puree, prosciutto, arugula, sundried tomatoes, goat cheese, mozzarella, and provolone. 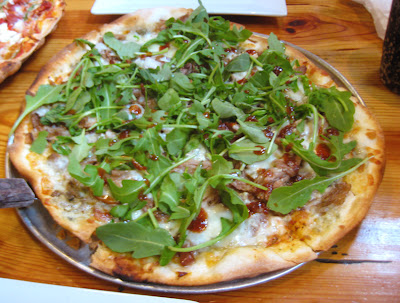 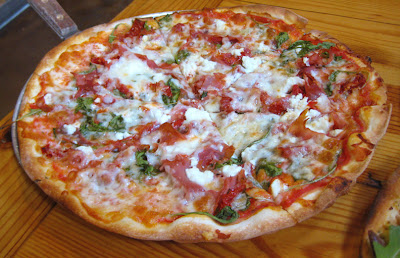 I thought they were both pretty perfect. The duck pizza was not too sweet, and the onions, pears, and bleu cheese were smashing together. The other pizza was a salty, cheesy delight. And both of them were just as tasty (maybe more so) when we reheated the leftovers the next day.