Birroteca, a relatively new restaurant located a piece down the road from Woodberry Kitchen in one of the old mill buildings near the Jones Falls Expressway, has been getting all sorts of positive buzz since the day it opened. We couldn't find time to visit the place during the holidays, but as soon as we knew our friend Melinda would be visiting, we made a reservation. So much better to try everything on the menu when there's another person around to help eat it all!

I heard Birroteca got crowded and noisy, so we made sure to eat early. When we got to the restaurant around 5:15pm, there were already several tables occupied and the noise in the bar was in full swing. Within an hour or so, the place was packed and the clamor - mostly due to one bigmouth woman at the next table - was deafening. This noisy restaurant thing seems to be a trend, no? And one I do not like. But if the food has received such acclaim, one must deal with the din in order to experience it.

Sun reviewer Kit Pollard mentioned on her blog that Birroteca's calamari alla plancha could be her favorite dish of 2012, so it was a must-try. She was not exaggerating. Mr Minx declared the roasty-flavored, über-tender ringlets to be the best he's ever eaten. I concur.


Birroteca serves food as it's ready, in large family-style bowls--all the better for everyone at the table to taste everything. The next several dishes that came to our table were carb-tastic, staring with the polenta. The planks of fried cornmeal mush were a bit too large, and the eggplant ragu didn't seem to have any eggplant in it, but otherwise, the flavors were nice. I'd have preferred smaller pieces, with a higher ratio of surface crust to fluffy insides. And some eggplant. 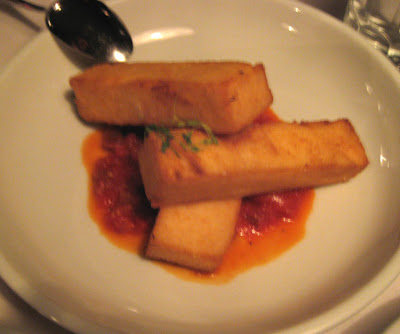 More successful were the arancini, which were nicely brown and crispy on the outside and tender and cheesy on the inside. The micro celery garnish was fun. 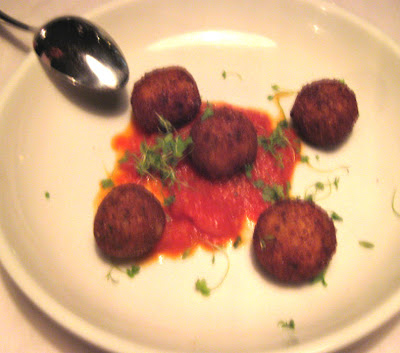 My favorite carb dish of the evening was the parmesan spaetzle with shaved snails and truffle oil. The noodles themselves were rice-sized, which gave the dish a pilaf-like quality, and super cheesy. I especially liked the cheesy crumbs on top. And don't say "eww" at the snails. I find snails to be closer in both flavor and texture to mushrooms than to anything that lives in a shell. 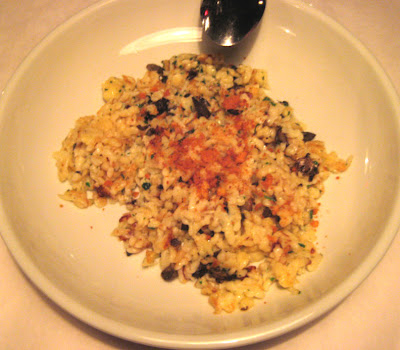 We also got a plate of the roasted cauliflower agrodolce which came adorned with pieces of dried fig. The sweet-sour element of the dish was subtle and didn't overpower the delicate cauliflower flavor. 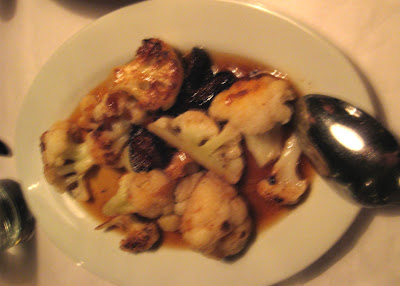 We then noshed on the Locavore pizza, topped with broccoli rabe, cauliflower, brussels sprouts, and a handful of arugula. It seemed like a good idea when we ordered it, but we probably would have preferred one of the more meaty varieties. The crust/cheese/sauce combo was all very nice, but the surfeit of cruciferous veg after eating a plate of cauliflower was a bit much. A bit of advice: don't leave the box of uneaten cauliflower/broccoli pizza in the car while spending a couple of hours at the mall. Phew. 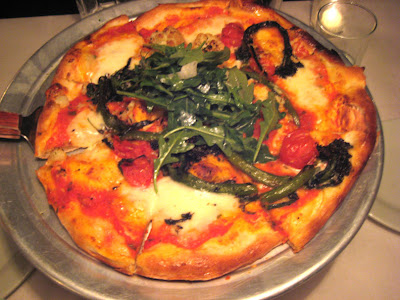 Despite all that food, we decided to make room for desserts, which were served in smaller portions than the other dishes, but still share-able.

Mr Minx opted for the chocolate caramel espresso tart, which was, um...amazing. Yum. Loved the chewy caramel topped with just the right amount of chocolate. (The older I get, the less interested I am in chocolate desserts.) 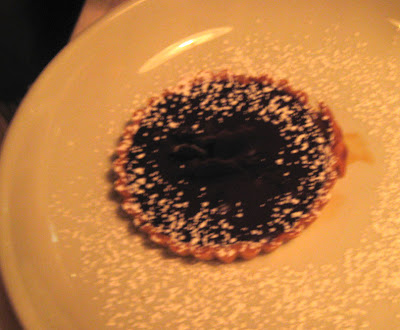 Our server enthusiastically recommended the banana cake with Nutella buttercream, but I think it was the most disappointing dish of the evening. The flavor of the cake was good, but the banana slices inside had an oddly hard texture, like dried bananas. (This kind, not chips.) And I couldn't taste the Nutella. 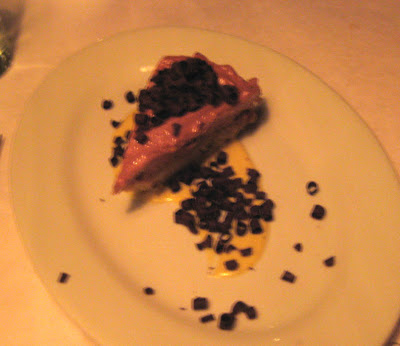 Much better was the orange panna cotta with amaretto cherries. How can sweetened heavy cream thickened into a pudding with gelatin not be good? And the cherries on the bottom - so intensely cherry. Mmm. 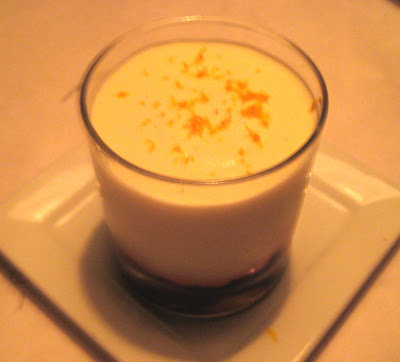 I've often heard people say that if a restaurant's service is bad, it doesn't matter how good the food is. The service at Birroteca was terrific - our server and everyone else who came to our table were genuinely enthusiastic about everything on the menu and seemed pleased when we enjoyed something. So even though a dish or two missed the (our) mark, we left very happy and full and vowing to come back soon, this time with a more meat-friendly companion (hence the plethora of vegetarian dishes we ordered). We want, nay - need, more of that calamari, and a duck confit pizza is definitely in our future, as are meatballs and probably some salumi or crudo.