I love that this show goes by so fast - there are only six celebrities left at the end of this episode! So much less-painful than Top Chef and Project Runway, which seem to drag on for half a year. Or longer. Granted, this is Rachel vs. Guy, and watching the two of them for six weeks straight is somewhat of a challenge for me--I usually want to throw a brick at the TV when I see their faces. But somehow I can deal with it for this show. I know. I think there's something wrong with me, too.

This week, everybody is carted off to the Underwood Family Farms, where, presumably, the famed Underwood Deviled Ham Spread is made. You know, that's a completely underutilized culinary product. Probably because it tastes just awful. But I'd love to see the celebrities have to make a dish using that stuff. Unfortunately, they get off much easier - members of Team Rachael and Team Guy have to cook both a main dish and a side using some of the lovely vegetables grown on the farm. Too easy.

Guy's team won last week, so they get an advantage in this challenge. The celebrities get proteins, and Team Douche gets to choose theirs first. Corny takes the portobello mushrooms, since she's a "vegetarian chef." Only in your mind, honey. You ain't no chef. Dean takes the lamb chops, Chilli takes salmon, and finally, Johnny chooses chicken breasts. Because, girl, he's all about the breasts. But only if they're on a chicken.

Rachel's team is stuck with what's left. Kathy, who also considers herself a "chef" takes the eggplant, Hiney takes the flank steak, and Carnie is stuck with pork chops, which she definitely did not want to deal with. The mocking "oink oink" noises that followed her around most of her life are probably too much for the poor dear to handle. BTW, her outfit this week is much more flattering than the one she wore last week. She actually doesn't seem much bigger than Rachael, but I guess that's really not saying much, is it?

Next, the teams go off into their respective corners and plan their menus. Over on Team Rachael's side, she thinks Hiney should branch out and make a chimichurri sauce for his flank steak, and he's all "wtf is that, bitch?"

Then the fun begins - the chefs get little wagons and maps of the vast farm and run around trying to find the ingredients they will need for their dishes. Which, by the way, they will be serving to 25 farm workers in addition to Rachael and Guy. 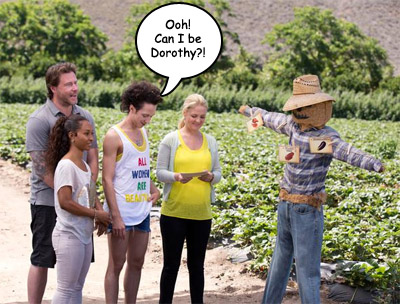 Chilli and Hiney are most definitely *not* farm people. She's tiptoeing around so as not to get dirt in her skimpy sandals or bugs in her teeth, and Hiney is squeezing his nostrils shut with his fingers because the place reeks of animals. He's fine with the stench of loss and dispair in a post-game Steelers' locker room, but he can't deal with the natural smells of chicken shit and cow manure. Wimp. 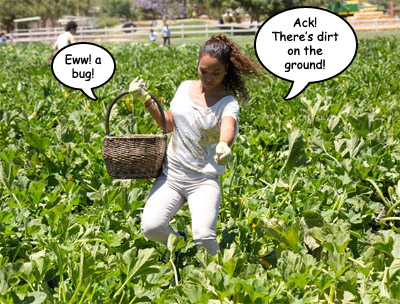 After gathering their veggies and herbs, the celebrities are assigned a series of grills on which they must prepare their foods. Carnie's all, "I prep food to be grilled. I do not grill." Guess grilling's a man's job, eh, Carnie? Sexist, much? 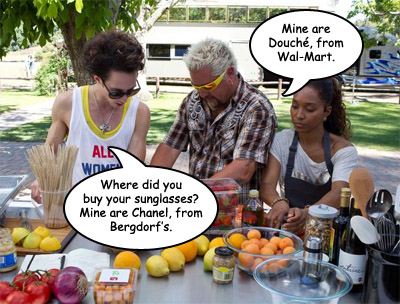 As we've seen in just about every other cooking-related reality show, grills and campfires aren't always the best way to cook an entire meal. If the fire's not working, water doesn't boil and veggies don't get cooked. Dean's fingerling potatoes, which are in a huge pot of water, aren't even bubbling, and Guy advises him to slice up some Russets and take another approach. Dean calls this, "changing horses mid-stream," which sounds like a mixed metaphor if I ever heard one. Or maybe it's a water polo reference? 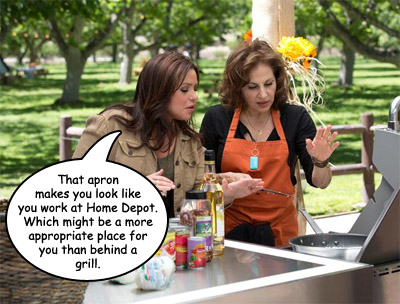 Over on Kathy's station, she seems to be in a trance because it takes her most of the hour to slice, salt, and rest her sliced eggplant. She realizes she's not even started her side dish, and with only a handful of moments to spare, she's slicing fennel and mixing it with canned garbanzo beans. Gag. 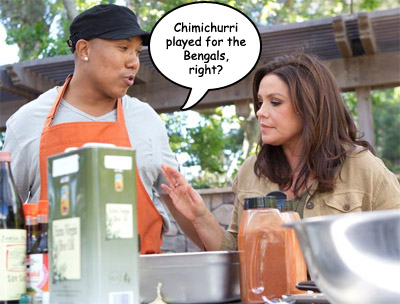 Meanwhile, Hiney decides to defy Rachael and make a teriyaki sauce for his meat. Chilli is taking Guy's suggestion to grill her salmon on planks, but it doesn't seem that she's soaked them first because her grill is on fire. Whoops!

Quickly, their hour of cooking fun is up and the farm hands have been seated and are ready to feast. Team Rachael presents first. Carnie has made something she calls "Sassy BBQ Top Chops" with potato salad on the side. Her chops are perfectly cooked, but the potatoes in the salad are not. The BBQ sauce is a bit sweet, but the salad's seasoning is spot on. Hiney's teriyaki grilled flank steak with grilled vegetables "yin yang," get pretty good reviews. His steak is perfectly cooked, and Rachael doesn't mind that he didn't make chimichurri. Kathy's struggled to make what she calls eggplant "farm" esan with a fennel salad. Oddly enough, everyone preferred her thrown-together salad to the slightly undercooked eggplant.

Team Guy's team's turn: Corny's stuffed mushroom is underwhelming and undercooked. Johnny's chicken "marbles" wrapped in prosciutto are salty but nicely cooked, and his "water" salad of cucumber, tomato, and watermelon with feta is tasty. Guy says he doesn't give himself enough credit for his culinary talent. Johnny, I mean. Guy gives himself too much credit. Chilli's raw honey apricot cedar planked salmon has a delicious glaze, but the fish itself is a bit overcooked. And Dean's lamb chop with strawberry mint sauce and steakhouse potatoes are sorely lacking in seasoning. Apparently "changing horses mid-stream" left him all wet.

The farm workers get to choose the winning team, and believe it or not, despite Team Guy looking pretty good, it's Team Rachael. Can't eliminate someone from a team that's only got three people on it, can we? I predict Team Guy will win next week. The bottom two on Team Guy are bland Dean and boring Corny, and appropriately enough, they have to cook something with corn in the Blind Tasting challenge.

Corny is making a veggie salad. She slathers some corn with butter and grills them in the husk, which causes them to catch fire. She also wisely boils a batch, just in case the whole butter on the grill thing was a stupid idea. Dean's clueless but he sees eggs in the pantry and decides a corn omelette would be a good idea. 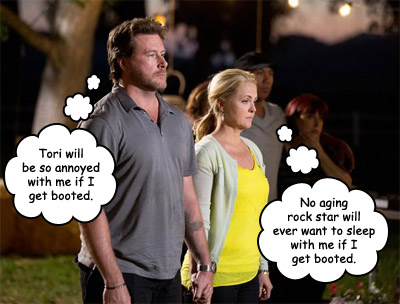 By the time they're finished cooking, it's dark outside, and we can see that Guy's badly sunburned. Guess neither his spray tan from last week nor the hair gel that dripped onto his face during the course of the day offered protection from the elements. His face is red and he's got big white spots where his sunglasses had been, making him look like some crazed punk rock panda.

Rach and Guy taste both Corny's corn salad and Dean's corn omelette while Dean and Corny tell us how much they need to win this thing. Corny, because she's supporting an animal charity, and Dean because his lovely wife would be pissed at him. Off on the side, Chilli and Johnny are hanging onto each other like two orphaned monkeys, which is both cute and pathetic at the same time.

The winner is announced, and it's Dean. And the Socialite vegetarian "chef" goes back home to her  house full of small dogs and Mick Jagger posters.

Next week: Diners, Douchebags, and Celebrities!