As much as I dislike both Rachael Ray and Guy Fieri, I got a big kick out of the first season of Rachel vs Guy Celebrity Cook-Off. So much so, I'm watching it again this year and recapping it so you don't have to subject yourself to it. I know - my generosity knows no bounds.

This year, the "celebrity" cooktestants are of a somewhat higher caliber than last time, and we meet them all in a fake red carpet scenario. You know, to add a taste of Hollywood. After all, this season was filmed in Guy's stomping ground of Flavor Town Los Angeles rather than New York. After the multiple bad reviews of Guy's Times Square trough fatty feeding facility restaurant, he's afraid to even get near the city.

First there's Dean McDermott, famous for leaving his wife and son to screw around with and later marry Tori Spelling (who's famous for being Aaron Spelling's daughter, and maybe for being on Beverly Hills 90210). They've now cranked out four kids together so far, and it's one of those situations where you can't say you hope they look like the mother OR the father. Then there's Rozonda Ocelean Thomas, better know as Chilli, from the popular 90s singing group, TLC. Another singer in the group is Carnie Wilson, from that 90s trio of famous musicians' offspring, Wilson Phillips. Carnie tells us she's a good cook. She's also apparently a good eater. The gal has had weight issues for years, and despite losing 150 lbs after gastric bypass surgery and posing nude for Playboy in 2003, her weight is back up. Hey - she's only human. However, she should fire her stylist for putting her in that hideous horizontally-striped muumuu. 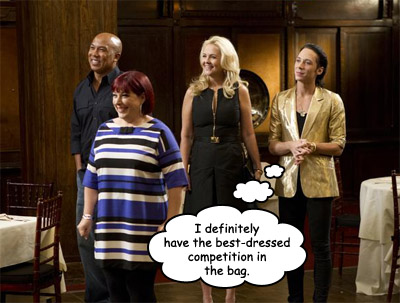 Former Pittsburgh Steeler, Dancing With the Stars champ, and media whore extraordinaire Hiney Warts is also on the show. And if you object to my calling him "Hiney Warts" instead of his actual name, then perhaps you shouldn't be reading the blog of a Baltimore Ravens fan. Just sayin'. Then there's Cornelia Guest, a self-proclaimed socialite, which is how they pronounce "whore" in polite society. She's a vegan, and will only be cooking vegan dishes for the competition. I predict she'll be gone early in the run. Another contestant who will be cooking primarily vegetarian/vegan dishes is Kathy Najimy, whose daughter is a vegan. She's been quite chubby in the past, but I've always thought she was as cute as heck. Another cutie is Johnny Weir, the flamboyantly talented figure skater who tells us that he cooks at home for his adorable husband and son (their dog). And last--and certainly least--is Gilbert Gottfried, the comedian best known for his annoying voice, which he lent to Disney as Iago the parrot in Aladdin and to insurance company Aflac as the duck mascot--until he got fired in 2011 after his rude Tweets about the Japan earthquake. Mr Minx took one look at him and said, "he'll be the first one off the show." Considering the man almost never opens his eyes, and can't possibly see anything in the kitchen, I'm betting he's right about that.

So the celebs gather in what appears to be an abandoned restaurant to await the grand entrance of Rachael and Guy. They emerge from the second floor landing and swan down a split staircase while the celebs pretend to be excited. Rachael looks like she's completely given up on trying to slim down, as her keister is formidable. And Guy has apparently bought stock in a spray tan salon, because he's as orange as Michael Kors. It even looks as though the stuff has leached into his bottle blond hair and douche soul patch. 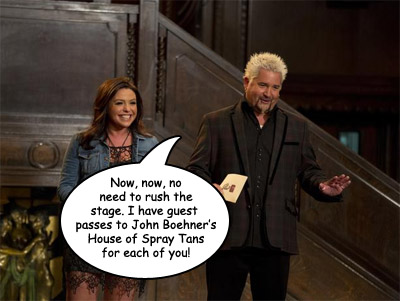 Their first line of duty is to pick teams:

I've decided that they all must have names that end in a "y" sound. Dean, Cornelia, and Gilbert will henceforth be known as Deany, Corny, and Gilby.

Rachael (Rachy?) and Guy then introduce this week's challenge: the teams have to provide a little dinner theater experience to 100 guests. Each person is responsible for one dish that will be part of a tasting plate, and a group dessert. And what's dinner "theater" without a little actual theater? (I'm guessing less chance of indigestion.) Each team has to put on a 3-minute skit, which shouldn't be too difficult for this pack of stage hogs.

The teams head off to their respective buses to plan their meals. Team Rachael seems a bit disorganized. After settling on "Pot Luck Party" as their theme, they seem confused as to who should cook what and why. Gilby is totally perplexed when he's told he has to cook a signature dish. What? I have to cook? Nothing comes to mind, and eventually he decides he's almost capable of making peanut butter and jelly sandwiches. Rachael suggests he elevate them with cinnamon sugar or something, anything.

Over on Guy's side, his team is far more organized. They're doing a Western theme and have their menu planned in no time flat. Then it's time to put on chef coats and head into the kitchen for two hours of cooking. 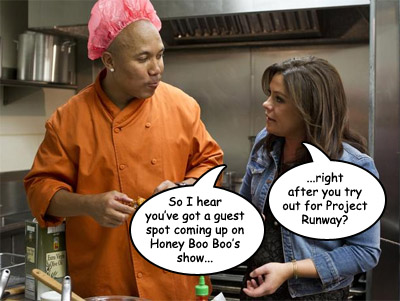 On Rachael's side, Carnie has her macaroni and cheese under control and is working on the team's dessert, a bread pudding. Her other teammates seem to be doing ok, except for Gilby, who is grilling his PB&Js after topping them with the cinnamon sugar. The sugar burns, producing rectangular charcoal briquets. He's not sure it's a bad thing, but Kathy advises him to throw them out and start over. Rachael suggests through gritted teeth that he put the sugar on after the sandwiches are cooked. Honestly - what is he doing in this competition? 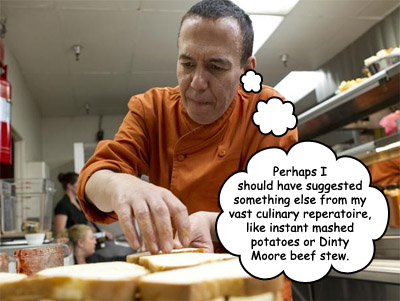 On Mr Spray Tan's side, Johnny is seen overmixing his chicken breast-only meatballs. Guy thinks that he probably shouldn't make them so dense and that maybe they need a little fat. When he leaves, Johnny says he's going to ignore the advice and do things his way, which will probably come back and bite him on his firm little ass. Corny is working on Deany's dessert, a "deconstructed" s'more, and after cutting out a couple of portions, she realizes there's not enough dessert to go around. Deany goes into panic mode and starts cutting the leftovers into tiny, uneven, squares and puts four on each plate, hoping nobody will notice how crappy they look.

Time's up and the teams have to present their food. Team Guy goes out first with their "Wild Wild West of Flavors." Each celeb has donned some Western-esque garb and basically just introduces his or her dish. Chilli's in her element when she's on stage, acting sassy and waving a prop gun around entirely too close to her face. Doesn't she know she could knock an eye out with that thing?   And Johnny steals the show when he rips off his oversized plaid shirt to reveal a sparkly black corset. Deany is so taken with him, he dips Johnny and gives him a passionate smooch on the mouth. Look out, Tori. Johnny is much more attractive than you are. Much. 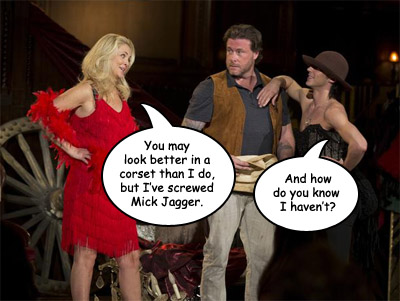 They serve their food. Deany's made a skirt steak with polenta that Rachael and Guy and two nobodies from Entertainment Weekly love. They are less enthusiastic about Corny's bland three bean veggie chili. Chilli has made something she cutely calls a "Chill"apia tostada, with spice-rubbed tilapia, and the judges rave. Finally, they taste Johnny's aptly-named "chicken tumbleweed" - chicken meatballs that are dry and dense and flavored with too much white truffle oil. Deany's dessert, which they've called "Less is S'more," tastes fine, but the portion sizes are all over the place.

Rachael's team is up next, and they act out their version of Cinderella, which they call, "Pot Luck Princess." Kathy has the idea that they should deliver the dialogue "backwards," but it just sounds like some consonants are being misplaced here and there. Gilby, wearing a feather boa and two different wigs, is at his best (that is - annoying). And Hiney (also in a wig) tells us that if any of his former team-mates caught him dressed as he was, they would "rag him to deaf." I don't know what they would do exactly to cause his hearing loss, but whatever it is, I want to watch.

Now the food: Kathy's vegan stuffed mushrooms are bland, and one guest calls it "the stereotypical example of what everyone thinks about vegetarian food"; Carnie's mac and cheese is called "awesome," which of course means absolutely nothing. Hiney's "Asian persuasian" wings are cooked well and crisp. Gilby let his team-mates down with his uninspired PB&J. The team dessert, Carnie's bread pudding, is both interesting and full of flavor.

Later, we see Rachael and Guy behind a Top Chef-style desk, pontificating about the food they just ate. They tell the celebs that Chilli's tilapia tostada was the favorite dish of the evening, according to the guests' comment cards. Overall, Guy's team is the winner, and will receive some sort of advantage in next week's challenge. This puts Rachael's team on the bottom, and the creators of the two worst dishes have to go head-to-head in a blind tasting elimination challenge. 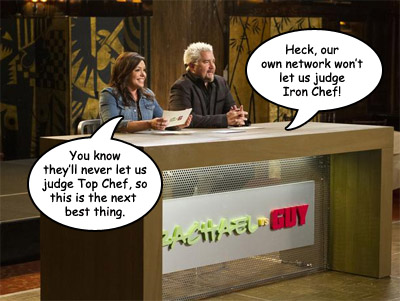 Kathy's mushrooms were bland, but couldn't possibly have been as bad as Gilby's sandwich, which one diner said could have been made by his three-year-old. The two of them are sent back to the kitchen to make the ultimate midnight snack. Kathy immediately runs for the chick peas and tahini to make her mother's Lebanese hummus and pita crisps, because she likes to have gas when she goes to bed. Gilby, whose imagination is completely spent after the difficulties of the main challenge, decides to make something he's more comfortable with - a peanut butter and banana sandwich.

When Rachael and Guy see the dishes, they know exactly who made what. And while Gilby's sandwich was admittedly tasty, they couldn't allow him to compete for another week. That voice! So annoying! 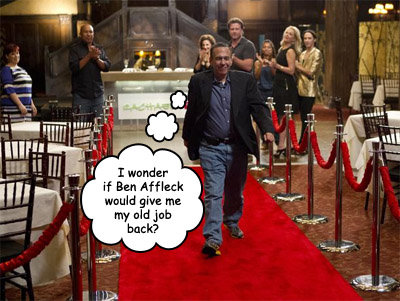 Mr Minx is (as usual) right, and we're down one contestant. Seven to go.

Next week: the celebs have to harvest their own ingredients from a large garden. Hilarity ensues.