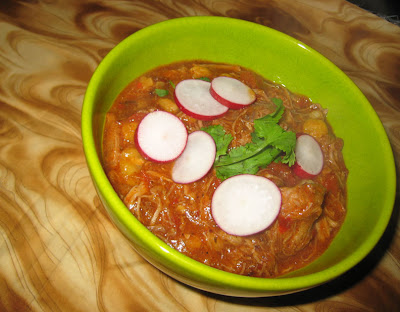 When football season comes around, it seems I'm always concocting recipes for long-cooked stew-type dishes. If I can get everything in a pot before the game, then I don't have to worry about cooking something afterwards when I may be stressed out from a loss or an especially hard-earned win. (Those times, I'd just rather have a cocktail and a big bowl of ice cream.) So there's plenty of winter weekends when we eat chili and the like. While I like to think I make some pretty kick-ass chili, I get bored with it.

One recent stressful Saturday, when the Ravens were facing the Broncos in the AFC Divisional Play-off game, and I was despairing that they had little chance against future Hall of Famer Peyton Manning and his new crew, I made something completely different - pozole. Typically a hearty stew of meat and hominy, my pozole contained red chiles for color and flavor, but green versions with tomatillos and green chiles also exist.

The dish was hearty and warming, and I was glad I didn't have to think about it much while I was biting my nails and cheering on my home team to their victory.

Place ribs, salt, and sliced garlic in a dutch oven with enough water to cover. Bring to a boil, then turn down so the water is simmering. Cook for about 90 minutes, skimming water as foam rises.

While meat is cooking, toast the chiles in a hot skillet for several seconds per side until they smell toasty. Place peppers in a bowl and pour on the hot water. Cover with a piece of plastic wrap or a plate. After about thirty minutes of soaking, remove stem end from pepper and slice lengthwise. Remove seeds and ribs, if desired, for a milder sauce, or leave some or all of them in for something spicier. Cut pepper into chunks and place in a food processor with the two halved cloves of garlic, the onion, and enough of the soaking water to make a thick puree. Set aside.

Remove meat from pot, remove bones, and tear into chunks. Strain the broth and set aside. Return meat to the pot with enough strained broth to barely cover, the chile, onion and garlic puree, hominy, and seasonings. Add chicken broth if there's not enough pork stock to cover, and simmer over medium heat, covered, for 45 minutes, until hominy is tender. If there's too much broth toward the end of the cooking time, turn up the heat for a few minutes to boil some of it off.

Season with salt and pepper to taste, garnish with cilantro and radishes, and serve with warm flour tortillas.