At the Top Chef DC Domicile, the remaining competitors are lamenting the loss of Tim, who was a "father figure" in the house. I'm thinking they don't mean in a icky, incestual way like George Michael. And Andrea is in a "good place" because she ended up in the top two for the last two elimination challenges.

Off to the Top Chef Sponsorless Kitchen where the cheftestants find Padma standing with the by-now-familiar almost-regular guest judge, the cranky-faced really-should-smile-more-often-because-she's-actually-pretty-when-she-does Michelle Bernstein.

Andrea suddenly isn't in such a good place anymore. 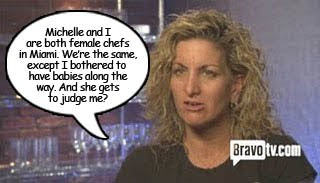 But you're ok with Padma, who has no restaurant and no sense of humor, judging you?

Padma and Michelle are standing by a table laden with exotic proteins like crocodile, yak, and the intriguing-in-a-bad-way "duck white kidneys." The Quickfire Challenge is to make something yummy with these odd animals.

BANG! BANG! BANG! That must be the PETA wackos I hear knocking on the door. 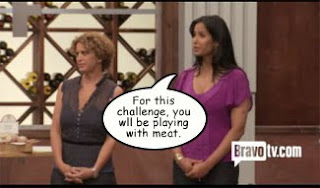 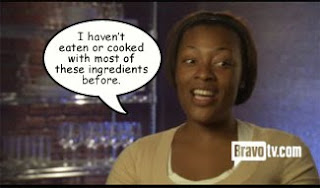 But have you played with them?

The chefs draw knives to determine the order in which they select their proteins. 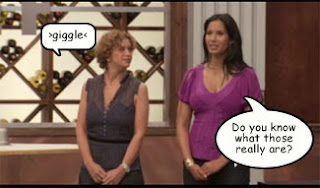 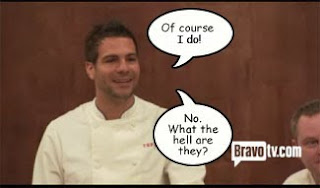 Turns out, they are not kidneys after all. They are testicles. 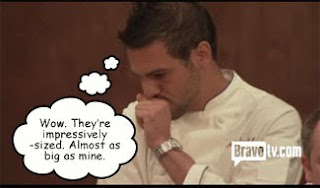 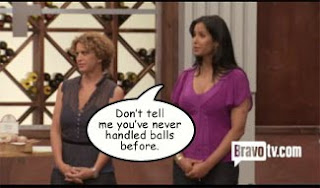 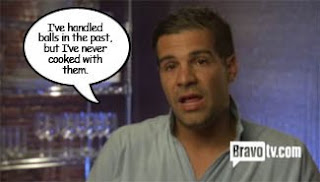 Kevin takes ostrich.
Kelly takes rattlesnake.
Tamesha takes llama.
Andrea takes duck tongues.
Amanda gets the only thing left on the table: emu eggs, and a hammer with which to crack them.

There are 45 minutes to cook so the chefs waste no time in getting started. Inigo determines that the duck balls are fluffy, like sweetbreads, and sets about making "testicle marshmallows," no doubt to be served on "penis s'mores."

About fifteen minutes in, Padma shows up: 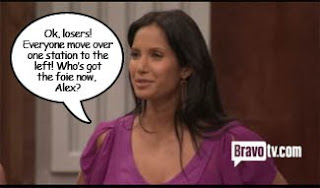 In a little twist, the cheftestants must change gears and start working the protein found on the station to their left. So now Alex the Pervert has ostrich, Kelly has the emu eggs, Stephen has the frog legs, Kevin has the duck nuts, Tamesha has the duck tongues, Andrea has the wild boar, Tiffany gets the foie, Angelo has the crocodile, Ed has the yak, Kenny has the snake, and Amanda gets the llama.

The cheftestants struggle a bit with their new proteins but get the job done. Padma and Michelle go around and taste the dishes. 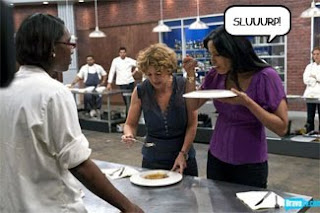 Michelle says that Stephen's dish is insipid, Alex the Pervert's ostrich is dry, and Andrea's boar needed to be cooked a little longer. 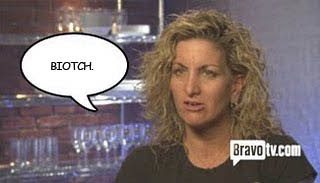 On the other hand, Michelle thinks Kelly's omelette is amazing, Tamesha's duck tongues are astonishing, and Amanda's sous vide llama is stupendous. But not in those exact words. And the winner is...

The winner is...Kelly. She made a lowly omlette from her used emu eggs but apparently it was a thing of beauty. She gets immunity in the next challenge.

On to the Elimination Challenge. Apparently the Cold War is still going on, at least in Top Cheflandia. Padma announces that the cheftestants will be facing a Cold War of their own by preparing dishes to be served cold. Like revenge. And of course, this being Top Chef 7, a season full of convoluted challenges with stupid names, this stupidly-named challenge has a convolution. The chefs will compete in two groups; while one group cooks, the other group tastes their food, and vicey versy. Each tasting group will choose one chef to be up for the win and one chef to be up for the loss. Because Kelly has immunity, she is exempt from kitchen duty but must taste all of the dishes.

In the meantime, the numbers on the knife block are hurriedly changed into As and Bs. The chefs draw again. Group A is Ed, Kenny, Kevin, Amanda, and Alex. Group B is Angelo, Stephen, Tamesha, Tiffany, and Andrea. 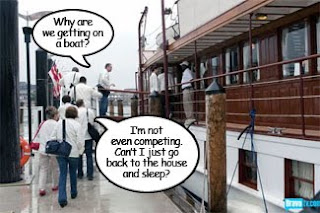 The cheftestants then head to the U.S.S. Sequoia, a retired boat that Padma calls the "maritime equivalent of Air Force One." There they are to strategize their dishes for the upcoming challenge, just like Kennedy and Nixon strategized during the actual Cold War. (And if the boat had been in commission during the Bush administration, he would have done some strategery himself, maybe about starting a new war. Oh wait, he managed to do that without a boat.)

The chefs meander around the boat, eavesdropping on and talking about each other and generally being a bit paranoid. As they should be. It is the Cold War, after all. Alpha thinks the other chefs will automatically have it out for him. 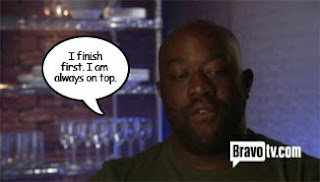 Wait, we're talking about cooking here, right? Or something else?

Inigo, on the other hand, has been suspiciously helpful to the other chefs, making lots of suggestions to people other than his BFF Tamesha. We assume he still hasn't shared his crabs with her gotten into her pants. 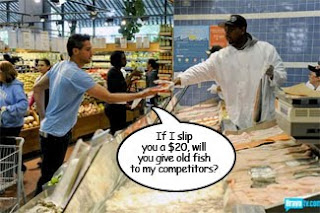 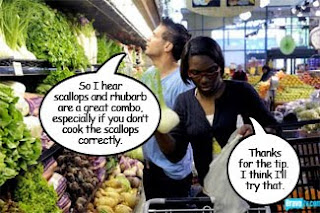 After shopping they get 2 hours to prep back at the Top Chef Kitchen.

Amanda has decided to make a chicken galantine, a difficult dish to make well in two hours, and is predictably having technical difficulties. 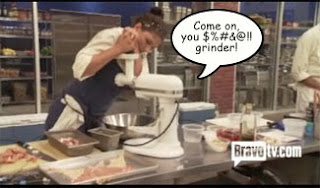 Also predictably, nobody wants to help her out. Tamesha actually wants to see her dead. 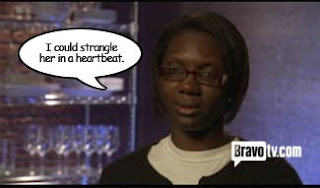 Just because they had words during the school lunch challenge. Well, Amanda wasn't very nice, but I don't think it was a strangle-able offense.

The next day, they head to their venue and finish their dishes. Oddly, they go to a place that doesn't have a kitchen, so they end up working on tables in a big green room. Why they couldn't stay at the Hilton is a mystery to me. 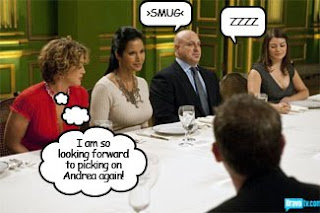 Group A goes first. As expected, the chefs from Group B who are tasting the dishes seem unnecessarily harsh in their judgments. Alpha still thinks he has a chance to be selected as a loser, because his competition is so afraid of his prowess. In the kitchen. 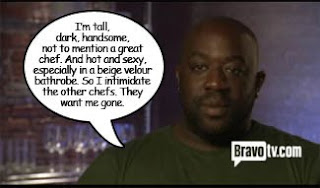 Despite harsh words for most dishes, the cheftestants from Group B pretty much all agree that Kevin's riff on veal tonnatto is the best dish. And of course the resident Alpha Male somehow fucked his dish up enough that they can feel justified in giving him the boot.

As for Group B, although Inigo's dish is arguably good, the cheftestants choose Tiffany's as their favorite. Tamesha, with Inigo's coaching, did some really horrific things to scallops and rhubarb; her dish is deemed least successful.

Back at the Not-Particularly-Glad-and-Hey-Where's-the-Beer? Stew Room, the cheftestants await the verdict. Padma comes in and calls for Kevin and Tiffany to stand judgement. I thought it was surprising for Kevin to be on top without Alpha holding his hand so I figured Tiffany would win this. But no - I was wrong. Kevin is declared the winner and given a bonus prize - 6 nights in Hawaii including air fare. Nice. 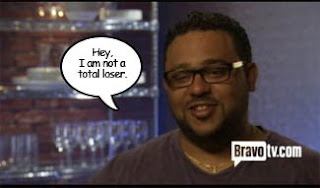 Alpha and Tamesha were then called out. When asked why he thought he was out there, Alpha said that he was intimidating to the other chefs and they wanted him gone. Michelle Bernstein said, as a newcomer and not part of the kitchen drama, she didn't like his dish either. So there, Mr I'm So Hot.

You know as well as I do that Alpha was not going to be sent home, no matter how bad his dish may have been. Tamesha's was "shockingly bad," but probably not so shocking considering that Inigo tasted every part of it and said it was fine. Sabotage. Probably because she wouldn't sleep with him. 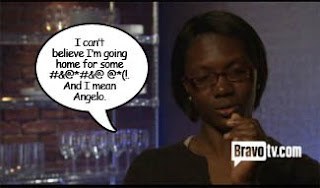 Next week: Ed and Tiffany, sitting in a tree?
Posted by theminx

You have the best Top Chef recaps! I look forward to it every week.

You're right - the "themes" of this season's challenges have been stupid, and the whole "Let's get on the boat and plan" thing was so unnecessary.

Oh, and did I mention how much I CANNOT STAND Michelle Bernstein?!? Andrea and I will cut a biotch...

It looks like Gail has had a breast reduction this season, doesn't it?? Just one more disappointment on a not-up-to-par season of Top Chef. But love your recaps...

Sorry it took me a month and a half (or in Top Chef Time "The Amount Of Time It Takes Casey To Chop An Onion"), but I was away.

Particularly LOVED the reference to Padma's lack of sense of humor!