Father's Day was a big mess this year. First we decide to switch venues and do it at Chez Minx instead of Chez Dad. Then we planned on getting 'cue from Andy Nelson's only to find that they're closed on Sundays. Bah! So I said that's fine, I'll cook, but none of the customary grilling as the weather was expected to be hot 'n' heavy. I spent that Saturday baking brownies and lime bars, breaking down three dozen chicken wings with a dull chef's knife and lots of grunting, and making a batch of red curry jam with which to coat the wings.


Yes, I did say, "red curry jam." A recent, very brief, e-mail conversation with Top Chef season 5 cheftestant Stefan Richter reminded me of a dish I saw on his catering site: sweet and spicy chicken drumettes with red curry jam. I found the concept of red curry jam to be fascinating and thought I'd try to make my own version of it. Seemed like it could be a perfect match with chicken wings.
Red Curry Jam
1/2 cup onion, roughly chopped
olive oil
dash salt
1 jar red currant jam or jelly (save the jar)
1 tablespoon Thai red or panang curry paste
Sauté the onion over medium heat in a bit of olive oil and a dash of salt until they soften and are slightly browned. Stir in curry paste (it will clump) and cook for a few minutes, stirring constantly.
Transfer curry/onion mixture to a food processor and pulse until you get a chunky paste. Add the jam and process until all is well blended and there are no large pieces of anything.
If your currant jam had seeds, strain the mixture into a bowl first to remove them. If  you used a smooth jelly, then you can skip this step if you want a jam with some texture. Transfer the strained (or not) jam into the cleaned jar. Refrigerate until ready to use.
----------------------------------------------------------------


In the end, we postponed Father's Day celebrations until further notice and the wings went into the freezer. I broke out half of them the following Sunday because I was impatient and just had to try wings with a glaze of sweet red curry jam goodness. 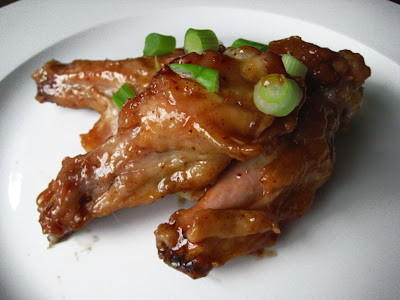 For the wings themselves, I used J. Kenji Lopez-Alt's recipe from Serious Eats.  I didn't get the full amount of time in which to dry the wings, and that apparently would have made the difference. Even after nearly an hour in the oven at 450F, the wings were a bit too fatty, and the skin wasn't crisp.

Chicken sure tastes good with red curry jam on it though. I put some on a chicken salad sandwich a few days later and it was da bomb!  And if you like ketchup on your eggs...try red curry jam instead. Your taste buds will love you for it.
Posted by theminx