For Father's Day this year, I decided to bake up a batch of both brownies and lime bars.

Rather than make my favorites, I decided to use the recipe for coconut swirl brownies that I found in my recently-acquired copy of Martha Stewart's Cookies. It seemed fortuitous that I had a partial can of sweetened condensed milk in the fridge, left over from making Thai iced coffees a couple weeks earlier. Mr Minx doesn't like the texture of shredded coconut, so I substituted a few tablespoons of coconut milk powder. And because I wanted a lot of brownies, I doubled the recipe, baking them for 40 minutes.

Something went awry and I ended up with a pan of huge puffy brownies that were very dense and cakey. I suppose they tasted fine, albeit not quite coconutty enough, but the texture was off-pudding. To me. I like 'em wet and fudgy. Brownies, that is. 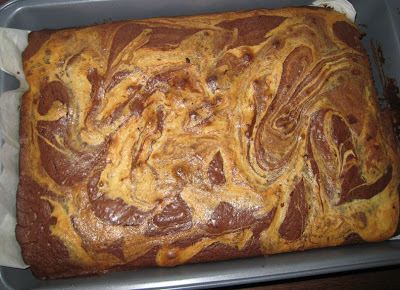 The lime squares were far more successful. I used a tried-and-true recipe for lemon bars from the Joy of Baking, and substituted lime juice and zest. 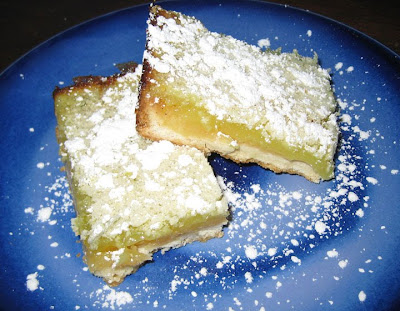 Preheat oven to 350F and place the oven rack in the center of the oven.Spray an 8 x 8 inch pan with non stick vegetable spray.

Beat the butter and sugar until light and fluffy. Add the flour and salt and beat until the dough just comes together. Press onto the bottom of your prepared pan and bake for about 20 minutes, or until lightly browned. Remove from oven and place on a wire rack to cool while you make the filling.

Beat the sugar and eggs until nice and smooth. Add the lime juice and zest and stir to combine. Fold in the flour. Pour the filling over the shortbread crust and bake for about 20 minutes, or until the filling has set. Remove from oven and place on a wire rack to cool.

To serve: Cut into squares or bars and dust with powdered sugar.
--------------------------------------------
Unfortunately for all of us, my brother was feeling poorly (thanks to his stressful job) and my Dad didn't feel it was right to celebrate Father's Day without both of his kids. I was able to freeze some of the raw ingredients I was going to use for dinner, but was forced to eat all of the dessert! Well, not all of it. Mr Minx and I ate brownies all week, but I experimented with freezing most of the lime bars. Fortunately, it was a successful experiment and Dad was able to enjoy them a week later.

Lime bars are so easy and tasty, I don't know why I don't make them more often. I'm contemplating playing with other juices in the future. How about tangerine bars? Mango bars?
Posted by theminx

How about cherry bars? I say this because my brother made the most delicious cherry cobbler yesterday, and I think that filling was just the right combination of tart/sweet.

I think cherry bars would be terrific! Maybe with a chocolate shortbread crust. Mmmmm....

I was also thinking cranberry bars for Thanksgiving.

Cranberry bars sound great too, now that I think about it :)