What to Do With a Branch of Brussels Sprouts

I realize this doesn't look anything like Brussels sprouts: 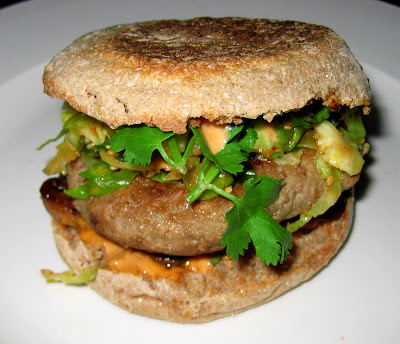 It's a pork burger with Asian flavors, topped with home made kimchi, which was made with...Brussels sprouts.
Last week, a vendor at the University farmers' market had branches of Brussels sprouts for sale, so I snagged one. I asked Mr Minx to use some for dinner one evening last week, and when I arrived home, I found that he intended to make some sort of slaw with which to top sandwiches made with leftover short ribs. Meanwhile, I had been contemplating a similar cabbage dish - kimchi. He had blanched the sprouts but wasn't sure what to do with them next, so I made a quick dressing of vinegar, sugar, garlic, ginger, Korean hot pepper flakes, and sesame seeds to go on top. Unfortunately, the Indian-esque flavors of the short ribs overtook the relatively mild sprouts.
Perhaps it would work better with a similarly-flavored meat product?
Attempt two involved some ground pork with which I made pork burgers. I also made another batch of kimchee, this time skipping the blanching step and instead slicing and salting them. The flavor was good, but Brussels sprouts are a bit on the tough side, like raw broccoli. Next time, I'll try steaming them a bit. However, on a sandwich, the texture didn't make all that much difference. And the pork burgers themselves? Outstanding.
Not much of a recipe here, since I did everything to taste:
Pork Burgers
To 1 lb of ground pork I added 1 egg, 1 tablespoon minced cilantro, 1 crushed clove of garlic, two chopped cloves of black garlic, a splash each of soy and fish sauces, a bit of salt and a healthy pinch of sugar. After forming into patties, I sauteed them in a tiny bit of canola oil until brown on both sides and cooked all the way through, 8-10 minutes per side, depending on thickness. (Aim for an internal temperature of about 160F.) While burgers are cooking, toss in a few slices of mushroom, if desired, and cook until browned.
Kimchi
Trim and slice thinly a pound or so of Brussels sprouts. Place sprouts in a colander and rinse well, then remove sprouts to a dry saute pan over medium heat. Put on a lid and steam for a few minutes (using the water clinging to the veg from the rinsing process) just until they turn bright green. Return to the colander and run cold water over them to stop the cooking process.
Drain well and place sprouts into a large bowl. In a small bowl, mix 1 or 2 cloves crushed garlic, 1 tablespoon Korean pepper flakes, a couple of squirts of fish sauce, a tablespoon or two of white vinegar, salt, four chopped scallions, a teaspoon or so of sugar, 1/2 teaspoon of ground ginger, and a teaspoon of toasted sesame oil. If you have sesame seeds, toast about a tablespoonful in a hot skillet and add to the salad. Mix into steamed sprouts and taste for seasoning - add more fish sauce, sugar, salt, vinegar until it tastes balanced to your palate. (After all, you're going to eat it. We're not going after authenticity here.)
Spicy Mayo
To 2 tablespoons of mayo, add 1 tablespoon of gochujang (a Korean bean paste) and a healthy dose of sriracha chile sauce.
To assemble:
Toast English muffins (or use bread of your choice). Top one half with mayo, sauteed mushrooms, the pork patty, and a healthy scoop of kimchi. Add cilantro sprig, more mayo, and the other half of the bun. Enjoy.
If you make this dish, please come back and let me know how it turned out!
Posted by theminx

Thanks. I'll have to try this. I attempted an asian flavored burger the other day. Made a slaw to top it (red cabbage, carrots, mirin, rice vinegar, sesame oil, ginger and siracha). I attempted to make a glaze for the burger by reducing veri veri teriyaki sauce, but just ended up intensifying the saltiness of it. The slaw was good, the burger, not so much.

I still think brussel sprouts are better as projectiles, but the kimchee idea is really interesting and I may have to try it. Love the spicy mayonnaise recipes, too!- F