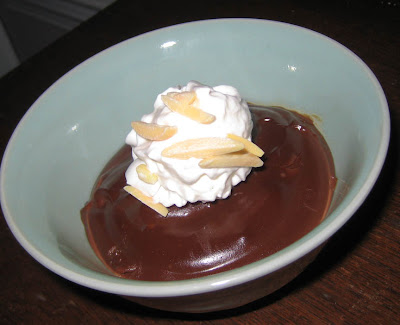 Last night, I had a hankering for home-made chocolate pudding. My mom used to make the Jell-O non-instant stuff when I was a kid, and that tasted swell to my as-yet-undeveloped tastebuds. But the best pudding I ever had probably came from the Daily Grind, at their short-lived outpost on Cold Spring Lane near Loyola College. My friend Andrée and I would go there late in the evening to have a cup of coffee and lament our woes of the day and occasionally we'd grab dessert. If chocolate pudding was available, it was mine. It tasted like childhood, a flavor that today's box of Jell-O could never replicate.
I checked online for recipes and found this one for John Scharffenberger's silky chocolate pudding. And you know what? It's good, but not great. It's too rich and dense, more like the chocolate creme brulée I almost killed my in-laws with some years ago than your everyday chocolate pudding. More like chocolate ganache than pudding. I could probably make it better by folding in some freshly whipped cream to lighten it, but that's more trouble than I wanted (the cream in the picture comes from a can - hey, it was good enough for Mom). Plus it would only lighten the texture, but not the calorie count.
Next time I'll try a cocoa-based recipe. Anyone have a favorite they care to share?
Posted by theminx


We bumped into your blog and we really liked it - great recipes YUM YUM.
We would like to add it to the Petitchef.com.

We would be delighted if you could add your blog to Petitchef so that our users can, as us,
enjoy your recipes.

Petitchef is a french based Cooking recipes Portal. Several hundred Blogs are already members
and benefit from their exposure on Petitchef.com.

To add your site to the Petitchef family you can use http://en.petitchef.com/?obj=front&action=site_ajout_form or just go to Petitchef.com and click on "Add your site"