After a week's hiatus, we return to the Top Chef McMansion™ in the dusty city of Lost Wages to find the remaining ten cheftestants in various states of complaint.
Jen has a cold. 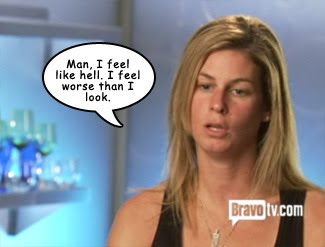 She must be near death, poor thing.
We also learn that Ash didn't go to culinary school, and that BrotherMike puts cooking before everything else, but that doesn't prevent him from missing his two young daughters.
And off we go to the Top Chef Kitchen at the M Resort & Spa, where we find the lovely pre-pregnancy Padma showing off her figure in one of the ugliest outfits imaginable. 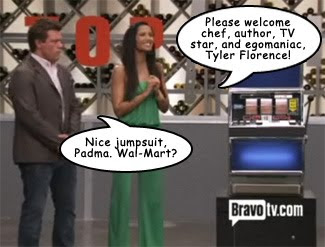 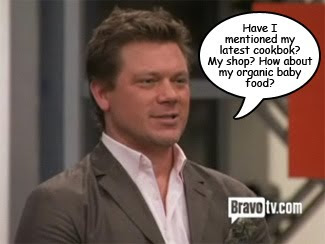 I used to like Tyler Florence™ until I friended him on Facebook. Every post was a shill for one of his products. Hey, do that on a fan page! Post interesting things for your "friends." Also, from watching Tyler's Ultimate, I have decided that the man only knows two adjectives - "fantastic" and "amazing." 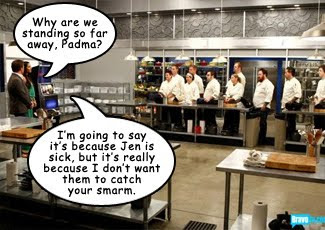 The Quickfire Challenge this week is rather complicated and involves keywords and slot machines. The "Cookstr.com Challenge™" requires each cheftestant to prepare a dish based on terms relating to mood, taste/texture, and cuisine, selected for them by a yank on a one-armed-bandit. For example: 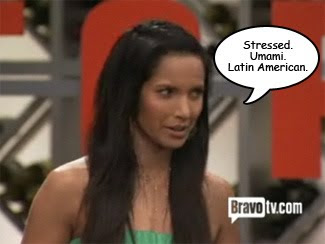 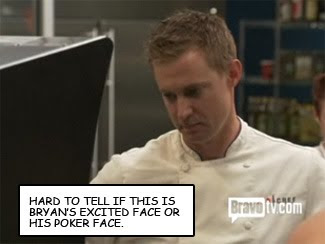 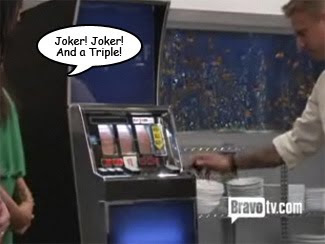 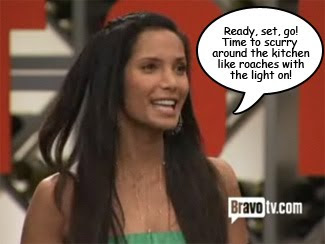 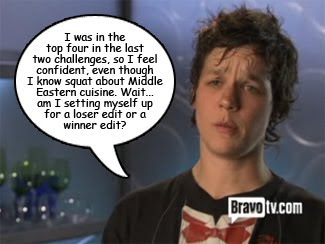 While Ashley feels somewhat confident, DoucheyMike says he has never cooked with Asian ingredients before. Kevin hasn't either. And Jen is still sick. 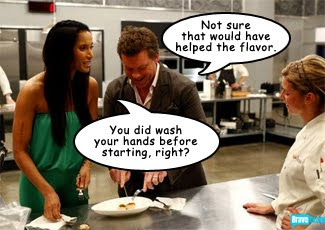 After tasting, Tyler picks the bottom three: Robin's root vegetable hash with curry oil (because it annoyed Padma that Robin considered curry to be Middle Eastern), TakeAllTheMushroomsEli's mushroom ceviche (because even Tyler Florence™ is sick of suh-VEECH), and Jen's Snot-a-Rama Scallops (for obvious reasons). On the flip side, he chooses Kevin's char-grilled pork with daikon, DoucheyMike's raw mushroom and yuzu salad, and BrotherMike's yuzu curd, Greek yogurt, and seaweed cracker as the best (even if the latter doesn't sound all that appetizing).
Kevin gets the win. AND...as this is a "High-stakes" Quickfire™, the choice between immunity and $15K. Smart man that he is, he takes the money.
Padma then starts talking about cooking for a dinner party, but sends the chefs home instead, saying they'll find out about the Elimination Challenge™ later. Later is apparently as soon as they get back to the McMansion™ because at that moment the cheftestants notice fully-stocked pantries, lots of electronic gadgets littering the countertops, and Padma slouching up the driveway in her ugly green jumpsuit. Also with Padma are these folks: Tom Douglas, Takashi Yagihashi, Govind Armstrong, Nancy Silverton, and Tyler Florence™, each bearing bags of groceries and a shopping bag with a very conspicuous logo. For the Macy's Come-Together Challenge™, the cheftestants have to host a dinner party for Tommy Hilfiger, Martha Stewart, Jessica Simpson, Queen Latifah, Emeril, Mariah Carey, and Usher. They will work in pairs, after drawing knives from the Top Chef Knife Block™ to see who gets stuck with whom.
Jen and Kevin are cooking with Tom Douglas' bag of ingredients.
Ash and BrotherMike get Nancy Silverton's bag.
Eli and Ashley win Govind Armstrong's groceries.
Bryan and Laurine get to work with the grocery stylings of Tyler Florence™.
And...DoucheyMike and Robin are working with Takashi Yagihashi's foodstuffs. This pleases DoucheyMike to no end. 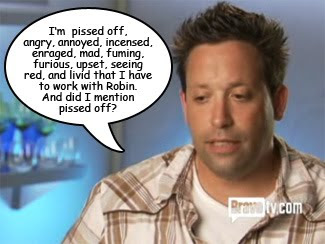 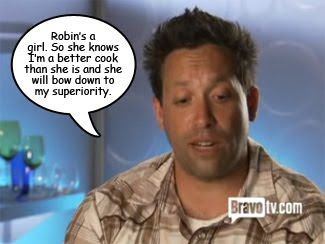 Although DoucheyMike acts the tough guy and says he's going to be running the show, "my way or the highway" style, Robin is the one who finds their workspace and starts giving him directions. 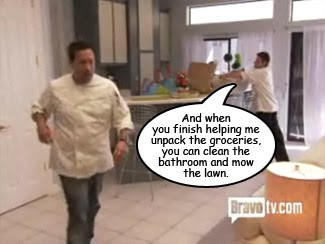 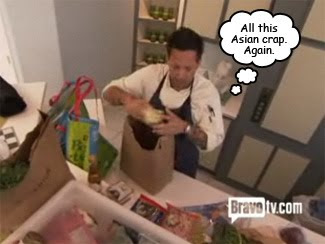 There is an advantage to working with Robin, as she's worked with Asian ingredients before, but he hasn't. However, he claims he's only allowing her to do small things, then is throwing them away when she's done. 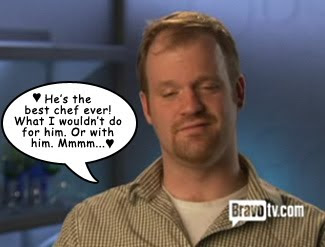 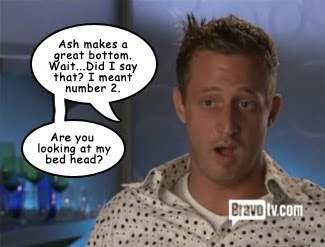 Tom comes in for his weekly Sniff n' Sneer™. He is dubious about Ashley and Eli's gnocchi with prawns on top, among other things. 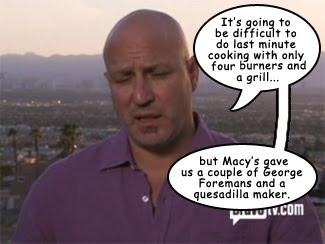 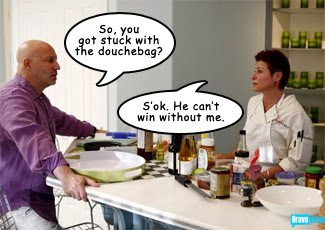 After two and one half hours are up, each pair of cheftestants has prepared a family-style dish. And like a good gay, Ash set the table and arranged the flowers to spell out "A.F.♥M.V."
The cheftestants come out en masse and serve the guests before returning to the house to twiddle their thumbs and think the worst. 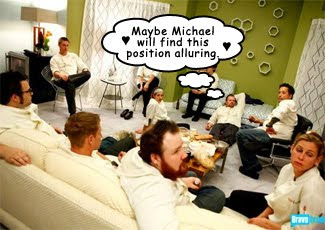 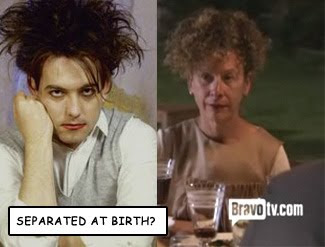 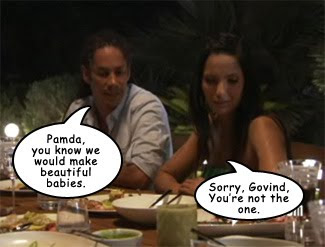 We then see the cheftestants in the Glad Family of Products Stew and Booze Room™. It appears to be the next day. Padma, who traded in her Wal-Mart™ special for something from the INC Collection™ at Macy's™, somberly tells the chefs that the judges would like to see Bryan and Laurine and Kevin and Jen.
Once the chefs are in front of the judges, Kevin 'n' Jen's beef and tomato broth are praised, as well as Bryan 'n' Laurine's halibut and corn cake. (I can vouch for the fabulosity of Bryan's halibut. The sear is, as Tyler Florence™ might say, "amazing.") Overall, however, it is decided that Jen's broth really made their dish sing. Not only does she get the win, she also gets a Macy's™ gift card worth $10K. Ten Thousand Dollars! That buys a lot of Tommy Hilfiger™ khakis and Jessica Simpson™ shoes!
Jen is so verklempt at the gesture, she gives Tyler Florence™ a big old smackerooni. 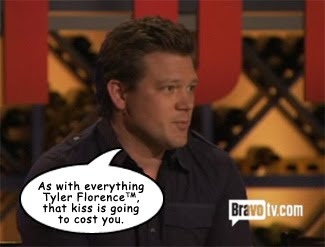 On to the losers: on the bottom for this challenge are Eli and Ashley and BrotherMike and Ash (whom we already know makes a good bottom). BrotherMike makes the excuse that their halibut was overcooked because he was having issues with the electricity in the house and the George Foreman™ Plancha he was using kept shutting off. Ash jumps in to say that he basically did nothing but follow BrotherMike's lead on everything because BM is such a fabulous chef. Ash also felt that their dish, conceptually, was "awesome."
When asked if he was ok with being essentially a commis, Ash said being second fiddle to BrotherMike was like washing Picasso's brushes. An honor. BrotherMike then slipped Ash a twenty. 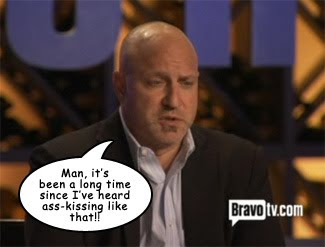 Ashley and Eli were on the chopping block because their spot prawns were undercooked, and their gnocchi were overcooked and oversalted. Not to mention a bit heavy to be eating outdoors in Las Vegas. Because Ashley was at least partly to blame for the gnocchi and entirely to blame for the prawns, she was given the axe. 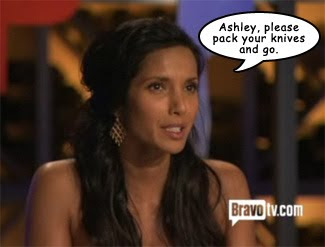 Next week: A special guest judge puts everyone in a tizzy! And the Brothers Voltaggio squabble!
Posted by theminx

OK, I haven't read your recap yet - just skimmed through - but the "Personal Shoppers of the Apocalypse" picture cracked me up!!

As soon as I finish up this pesky work stuff I'm going back to read the whole thing...

Fun and funny recap.
Not too surprised by Ashley....actually, I thought she was not a chef but an intern at
LA INK.

I might have to fight with Ash over BrotherMike! D.D. hearts M.V.!

And, seriously, could DouchyMike just leave already. He is just so gross.

I thought it was unfair to diss BrotherMike for the electricity fail. Limited items and a time deadline. How many of us have waited WAY too long for something to come out of the kitchen? Judges, this ain't even CLOSE to the constraints you have in real life - even if you are cooking outside your restaurant. Back off on the no excuses bit - irritates the hell out of me.

I didnt think Ashley deserved to go this week..

Boy, you REALLY hate everyone/thing about the Food Network anymore, don't you? I thought you liked Tyler Florence.

Another funny recap. I was glad that Brother Mike didn't go home. And so was Ash, apparently. :o)

And scary is that Tyler Florence is opening a restaurant in Marin County with Sammy Hagar. I am very afraid.

I thought Kevin's comments during the Quickfire™ were pretty good. Usually the contestants fawn all over the guest judge, but all Kevin was shown saying was something like, "Oh yeah, that guy has written some books and I think he's on TV."

Thanks for clearing up the Tyler Florence Experience for me. I just KNEW he had to be from That Network I Don't Watch. I don't feel I'm missing much there.

And LOVE the Sniff n' Sneer™!

BTW, it's all I can do to keep from weekly embarrassing myself about my crush on Ash the way Ash embarrassed himself about BrotherMichael.

Oh man, Ash did have hearts in his eyes whenever he talked about Mike V. :)