Dining Dish Dara's recent Examiner article reminded me (not that I needed it) that I have too many condiments in my fridge. Once in a while, I get tired of the lack of space and do a radical purge, but for the most part, at least 1/3 of my refrigerator space is filled with various jellies, chutneys, and exotic seasonings.

Last weekend, when deciding on a flavor profile for the short ribs I planned to make for dinner, I found the perfect clean-out-the-fridge recipe - that of Gray Kunz, from The Elements of Taste. The recipe calls for oddball ingredients like Sichuan peppercorns, mango pickle, and tamarind, all of which I have on hand. The result is a vaguely-Indian-esque barbecue sauce - a little sweet, a little tangy.

The Ravens were sucking pretty badly on Sunday, so it gave me an excuse to hole myself up in the kitchen and prepare the various elements of this rather involved recipe. First one toasts and grinds a variety of spices (I was lazy and used pre-ground spices), applies it to the meat, and gives it a good sear. Next the sauce ingredients are whizzed up in the blender, brought to the boil and poured over the seared meat, which then goes into the oven for 3 hours. My ribs only took 2 hours to cook, which meant I had time to put the cooking liquid into the freezer in order to skim off the inch of fat that the short ribs produced.

The sauce was to be finished with some home-made papaya pickle, but I skipped that part because it was just too fussy. And I don't like papaya. (The flavor is ok, but the smell gags me.) I just boiled down the braising liquid, adding more brown sugar and salt to taste.

The recipe suggested an accompaniment of root vegetable puree. I happened to have a few parsnips on hand and boiled them with some potatoes until tender. They made a terrific mash with some milk and a dash of heavy cream. The parsnip had an amazing citrus-like flavor that I had never noticed before in that veg. 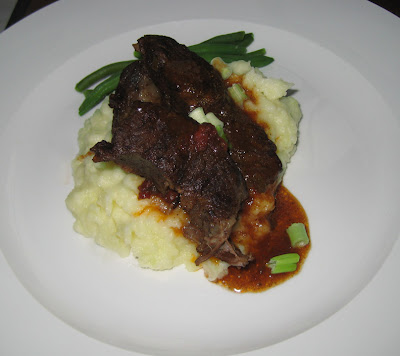 The verdict? A lot of work, but the flavors were well worth the effort. And now I have a quart of leftover bbq sauce that might have to go over pulled pork at some time in the near future, but in the meantime will just take up space in my fridge.

It's an uphill battle. :)
Posted by theminx