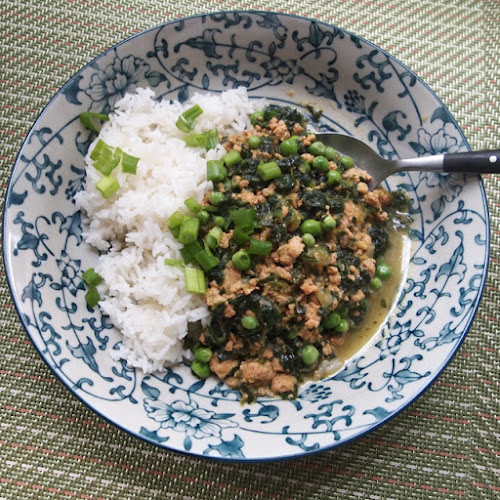 I hate football season, I really do. While I enjoy the game, both the skill and brutality, I don't enjoy the tension. It's hard having a favorite team, because the enjoyment of an entire weekend hinges upon the outcome of the game. And the Ravens have been sucking big time this season. BIG time. But I put on my Joe Flacco jersey or at least something else purple and sit in front of the boob tube every week, drinking and biting my cuticles, hoping and praying that they'll not make total asses of themselves.

I am a glutton for punishment.

I especially hate 1pm games. We like to eat dinner early, so when the game ends at 4 or 4:30, I have precious little time to walk the dog and prepare a meal before the hungry beast that is Mr Minx comes upstairs for something to take his mind off the most recent pigskin debacle. That would be dinner. What I normally end up doing is making chili or a similar long-cooked dish that bubbles away on the stove while we stamp our feet and grit our teeth in our basement TV room. I can't count the number of chili variations I've made over the years; it's gotten a little tired. Last week, I made something that was mostly different from chili, yet not. It was a fairly lazy preparation, a little sauteing and then some simmering, but it was good. And it made a ton, so we were able to get away with not thinking about one dinner later in the week.

Saute the onion and peppers in a tiny bit of veg oil and a pinch of salt until onions are wilted. Add the pork and cook over medium-high heat, stirring frequently, until no longer pink and starting to brown in parts. Stir in the garlic and cook 2 minutes. Add the chili paste and stir well to coat all of the meat. Pour in the coconut milk, bring to a boil, then turn down to a simmer.

Finely chop the cilantro, including tender stems. Add half of it to the simmering pot. Cook for one hour, or until pork is very tender. Add the remaining cilantro, the spinach, and the peas. Cook until veg are heated through. Season with lime and fish sauce to taste.

Serve over hot Jasmine rice with a sprinkling of scallions.