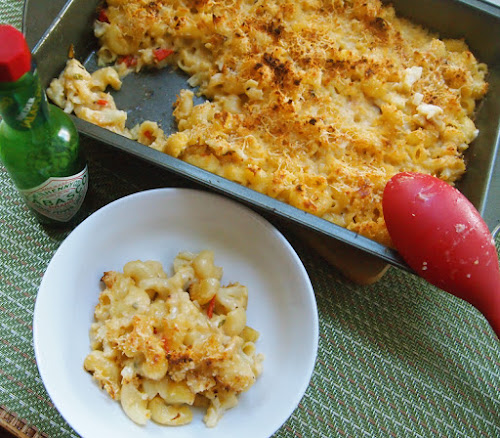 I have always been a fan of cauliflower. Even as a kid, I could eat an entire head of it for dinner. Just slather it with butter and add some salt and I'd be happy. But I was never a picky eater. My brother, on the other hand, was. The only way he would ingest cauliflower (or broccoli) was if it had been smothered in gloppy cheese sauce. Fortunately (or not), Green Giant produced such a concoction in plastic bags that could be reheated in a pot of boiling water. Mm mm.

So it didn't seem like much of a stretch to put cauliflower in macaroni and cheese. With the veg standing in for some of the pasta, it could even lower the calorie count of the dish a tad. Just a tad, because, you know, cheese sauce. That isn't ever going to be lo-cal and taste good at the same time.

You could omit the onion, garlic, and peppers from this dish to make it plainer for your picky kid who will only eat mac and cheese and chicken fingers. Or, you could make their undiscriminating asses that garbage from a box that you usually feed them and cook this much tastier version for yourself. It might look and smell so good, the rugrats will beg you for a taste.

Cook the onion over medium heat in a tablespoon or so of olive oil and a pinch of salt. When the onion is translucent and starting to brown a bit on the edges (about 8-10 minutes) add the jalapeno and the garlic, stirring frequently until pepper has softened. Remove from the heat.

While the onion is cooking, bring a large pot of water to a boil and salt generously. Cook the cauliflower until just tender. Remove from the water with a slotted spoon and set aside. Bring the water back to the boil and add the pasta. Cook until al dente, about five minutes. Drain the water from the pot, leaving the macaroni in it. Add the cauliflower and the sauteed onion mixture to the macaroni and stir to combine. Turn the heat back on under the pot, about to medium, and add the evaporated milk and the pepper jack and cheddar cheeses. Stir until the cheeses have melted. Stir in the smoked paprika and taste for seasoning, adding more salt if necessary.

Pour all into a buttered 9" x 13" baking dish. Top with the Parm and panko. Bake for 20 minutes until heated through and bubbly. If not browned on top, put the pan under the broiler for a couple of minutes to get the crumbs nice and toasty.