This post is almost five years old at this point, so almost none of the examples are as good or as ugly as I stated here. Click the images for better examples of what I'm going on about. It's nice to see that most restaurants did update their sites in the past few years, not that I had anything to do with it.

They say you can't judge a book by its cover, but as someone who is more than a little bit obsessed with good design, I have the tendency to judge restaurants by their Web sites. For me, the most important things to feature on a site are a) hours; b) location; c) menus, preferably with prices and not in PDF format. Oh, and signs that the site has been edited by someone who has a grasp on correct spelling and grammar. Everything else is filler. No need for gushing testimonials from customers - they're misleading because we know the restaurant has cherry-picked only the best comments. Photos of dishes are nice, but only if they're good photos of food actually served at the restaurant, and not stock images. And forget cheesy music and home pages that make visitors wait for completely gratuitous graphics and videos to load - few things will make me hit the "back" button sooner and change my dining plans. It can be a bit like Christina Aguilera singing the National Anthem during the Super Bowl - all Flash, no substance. Maybe even a big fail. 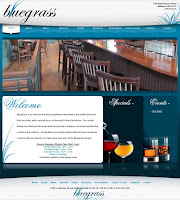 I took a look at several local restaurant Web sites and found few that really struck me as being well-designed, attractive, and to-the-point. On the other hand, annoying and/or ugly ones were a dime a dozen.

Let's start out with the best of the bunch; Bluegrass Tavern's site is a good example. The address and hours of operation are easy to find on the main page, as is a link to their various menus, plus additional tabs for specials, drinks, and reservations via Open Table. While there is a large slideshow-style image graphic on the main page, it changes slowly enough that one has already clicked through to another page before really noticing it. 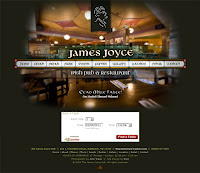 Another site I like belongs to the James Joyce Pub. It's visually attractive, has no Flash or music, and it has their hours, location, and link to menus on the main page, along with an Open Table reservation feature. Staying in the Irish vein, Tir Na Nog's site is really stunning, with very subtle moving features. And all the important info is not only on the main page, but it's also "above the fold." A shame they didn't spell "shepherd's pie" correctly.

One might think that a vaunted restaurant such as Cindy Wolf's Charleston would have a fantastic Web site. While the site is nice-looking, it's all Flash, and one has to dig around quite a bit to figure out when the restaurant is and is not open for business (click the "contact us" button, then click the tiny "hours of operation" link on that page). Other restaurants in the Charleston Group also have site issues. Pazo not only has a lot of unnecessary
Flash on the main page, but also a bit of auto-play electronica that is reminiscent of cheesy porn music. The site for Petit Louis is fairly plain, but one has to click the "location" button to find the restaurant's hours, which are arranged on a wide black bar that doesn't seem to have much purpose at all on several pages. And the super-cheesy photo of owner Tony Foreman has got to go. Cinghiale has some loading issues; the home page was essentially blank for a good number of seconds before the logo and navigation system popped up. And when I click "menu" I want to see the menu, not another page that lists the menus, with a subsequent page that has some text and yet another link, "view dinner menu." In other words, one has to click three links to see what the restaurant serves, at which point I've given up and gone elsewhere.

One of my biggest pet peeves is the lack of attention to detail by bloggers and Web designers alike when it comes to spelling and grammar use. Most like to chalk it up to "typos" but it's pretty easy to figure out when the writer transposes a couple of letters in a word and when he or she has no clue whatsoever - and doesn't seem to care. Take the site for Louisiana, for example. While not the most attractive site around, it's not bad, except for the writing. On the "restaurant" page, we find this doozy: "We accomadate your every need with the same attention to detail and service that has made Louisianna a destination for many descrimiation diners."

Attention to detail my ass. The restaurant is also referred to as "Louisiana's" on a couple of pages (the URL also adds an "s" to the name). And why is the text on some pages in all caps, and on others in both upper- and lower-case? If I hadn't already eaten there several times (back before they had a Web presence), I doubt I'd bother going now.

Another site that turns me off belongs to the restaurant Tabrizi's. First of all, there's a wait while the site loads. During this time, I think, "time is money, and you're probably not getting any of mine." Once it does load, there's annoying music and every click on every link activates a quick-moving bit of Flash. It's a gimmick that really has no purpose. And the restaurant logo really does not need the ridiculous amount of drop shadow it's sporting. But at least the logo is there.

That is not the case for The Wine Market's site, which does not have a logo or even the restaurant's name on its header. It doesn't have a header at all, really, just some dumb javascript mouse-over silliness. If I didn't accidentally hover over the images that take up the majority of the home page, I wouldn't realize that they activated a link in a non-descript banner above them, which does in fact say, "Welcome to The Wine Market" when one first lands on the page, but changes as soon as the mouse pointer gets anywhere near those photos. There's some vague potential to the site, as the hours and address are on the main page (in a tiny font), and the content is ok, but it's a bit too free Javascript-happy for me.

Then there are the sites that are just butt-ugly, that look like someone's second cousin's mailman's dog put them together for a free lunch. Sullivan's Steakhouse is one of them. It's plain and rather un-corporate-looking for a place that has twenty locations. The worst part is the series of photographs that move underneath the text on the "menus" and "private dining" pages. They're a bit nausea-inducing. And why aren't they on all of the pages? Why is there no consistency? The Brewer's Art has another hopelessly homely site, but at least all of the pertinent information is right there on the home page. Waterstone Bar & Grille also has an ugly site, with too much empty space and links that are entirely too small. A quick check of the source code reveals that it was created with Microsoft FrontPage, a program that in itself is a giant fail.

Honestly, I could comment on just about every site out there - negatively - but I've probably gotten my point across by now. It's a point that The Oatmeal also makes pretty succinctly. And it's not just Baltimore - even glossy Michelin-starred places owned by uber-chefs Daniel Boulud and Eric Ripert suffer from cheesy music and graphics. The site for Daniel offers a link with info on the restaurant's interior design, but not for hours of operation (they are on the "reservations" page, however). Le Bernardin is no better, offering the sounds of diners chattering and clinking utensils in addition to music. The pictures are shore purty, but dammit, I've got better things to do than to wait for the links to load! (I can only assume that the people who dine in these palaces of gastronomy have assistants to slog through Web sites for them.)

What do you like to see on a restaurant Web site? Do you want the site to be informative AND attractive? Do you like encountering music, moving images, or other Flash features? I'd love to find out if I'm "normal" or just too picky.