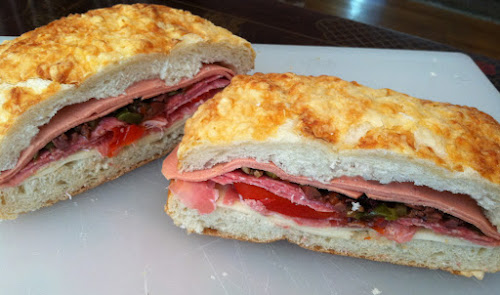 A muffuletta is a sandwich named after the bread it is made on. A flattened loaf studded with sesame seeds, muffuletta bread is of Italian origin, but the sandwich itself comes from New Orleans. It's rather like an Italian cold cut sub or hoagie in that it's filled with various Italian-style meats and cheeses, but with one important difference--olive salad.

Olive salad is made with giardiniera (a selection of pickled veg including cauliflower, celery, and carrots) and olives, with spices and garlic. It's likely that some grocery store owner somewhere along the line had a few dribs and drabs of pickled vegetables and olives and tossed them together so they wouldn't go to waste. A fine idea. But I'm not a big fan of olive salad. I love olives, but am picky about giardiniera. Often I find it to be too harsh. In my Polish family, we'd call it ostry. Sometimes the veg are too hard, or the pickling liquid tastes of nothing but distilled vinegar. I kinda wish that olive salad was pretty much just olives. And it is, when I make it myself.

I did just that when I needed to come up with something to take to an Orioles game. The bread used in a muffuletta tends to make it more sturdy and leak-proof than an Italian cold cut sub, but of course it's not exactly easy to find an authentic muffuletta at the local grocery store. So I compromised. Giant sells cheese breads that come in a flattish square shape, with good crust, crisp without being hard, and a sturdy crumb. The cold cut portion of the program--prosciutto, salami, bologna (standing in for mortadella)--was easy to find, as was the cheese. And right next to the deli is an olive bar. I originally was just going to buy random olives, pit and chop them, but luckily they had a pre-mixed selection of pitted olives with chunks of hot pepper in a herbed olive oil. A swift chop and a drizzle of vinegar--voila! olive salad.

Since my bread wasn't authentic, nor my olive salad, I couldn't really call my concoction a muffuletta. What I could call it was delicious. It keeps nicely for several hours after making and is easy to eat on the go. Or sitting in the stands. Or even on your couch.

Slice the bread in half horizontally. Pull out extra dough from the top part (if it's slightly domed, like my cheese bread was) and discard (or use to make bread crumbs for some other dish later in the week). If you're going to eat the sandwich within an hour or so, then start with the olive salad, spreading it over the bottom half of the bread so it covers from edge to edge. Then layer on the cheese, prosciutto, tomatoes, salami and bologna. Cover with the top of the loaf, press down, and wrap tightly in plastic wrap until ready to eat.

If you're NOT going to eat the sandwich relatively soon, layer the ingredients starting with the cheese, prosciutto, tomatoes, salami, olive salad, and finish with bologna. This way, the wet ingredients aren't touching the bread so the sandwich won't become soggy before you're ready to eat it. (Eventually, the bread will get soggy, but it will take many hours before this happens.)

Cut sandwich in half, then half again. Enjoy.

Chop the olives and peppers and place them in a bowl with the remaining ingredients. If it seems dry, add a tiny bit of olive oil, too, but there should already be enough of that in there. Refrigerate until ready to use. 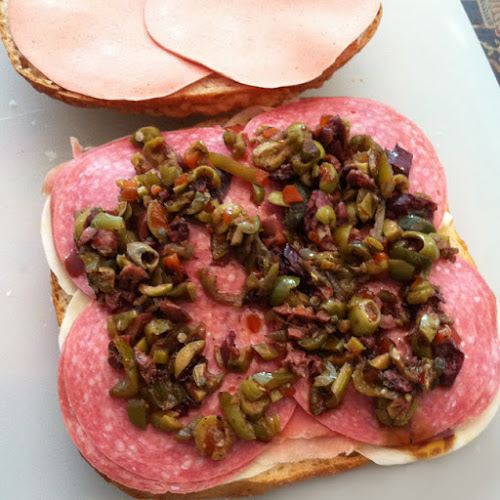