Have you ever found yourself nibbling on the crispy bits of brownie clinging to the pan after you've served up a fresh batch from the oven? Sheila G has. In fact, this is her favorite part of the brownie, so she decided to make a line of snacks specifically created to taste like those crunchy morsels there never seems to be enough of.

Brownie Brittle, as she calls it, comes in four flavors: Chocolate Chip, Mint Chocolate Chip, Toffee Crunch, and Salted Caramel. They're cracker thin and roughly square shaped, but tend to break apart into smaller pieces in the bag, much like real brittle. Despite their diminutive snack size, Brownie Brittle is intensely chocolate flavored so you won't need to eat too many to feel satisfied. 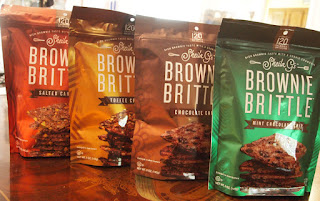 The Chocolate Chip flavor is the most reminiscent of a traditional brownie, but the crispy texture might also give you nostalgic memories of eating Coco Pebbles while watching cartoons on TV. The Toffee Crunch is also quite good with just enough toffee to give you the flavor without getting unwanted bits of gooey sugar stuck in your teeth. Salted Caramel is a hot flavor right now, so it's no surprise that Sheila G has a version of it. I just wish it had a tad more salt to drive home the contrast with the caramel.

After an unfortunate childhood incident where I ate a half gallon of mint chocolate chip ice cream by myself and got sick, I've never been a fan of that flavor combination. However, in the interest of thorough reporting, I sampled the mint chocolate chip Brownie Brittle. To my relief, the mint is fairly subtle, providing a touch of refreshing support to the rich chocolate flavor. I could actually eat a few of these without any bad flashbacks. For mint and chocolate lovers, I'm sure this would be a favorite.

Sheila G's Brownie Brittle allows you to enjoy the flavors of a brownie with far fewer calories than eating a whole brownie square. In fact, a 1-ounce serving has only 120 calories. So if you go hog wild and eat the whole 5-serving bag, well, at least you'll still have a couple of calories left in your daily allowance for some vegetables. You know, for balance.

Later this year, Brownie Brittle will be available with holiday decorations. The mint, chocolate chip, and salted caramel versions will each have a chocolaty drizzle on top, to make them a little more festive.