When the Joy America Cafe opened in the American Visionary Art Museum (AVAM) in November of 1995, it brought a new style of restaurant to Baltimore City. Chef Peter Zimmer's cuisine reflected a number of different cultural influences, from the Southwest to the Chesapeake, which at the time was quite innovative for this area. Today, twenty years later, quirky restaurants that fall somewhere between formal and casual are the norm in Baltimore, as is food with world flavors.

But the innovative spirit of Zimmer's Joy America Cafe lives on in Robbin Haas' new restaurant at AVAM, Encantada. The decor is a bit all over the place, with large areas of black and white patterning punctuated by bright colors and examples of the "outsider" art found all over the rest of the museum. It's wild and fun, and somehow it all works. But don't let the room distract you from the menu, which is focused on small plates. Before you say, "What's innovative about that? They're everywhere!" let me add that the small plates are primarily vegetarian, and some are vegan. And the dishes are so interesting and flavorful that you will not miss the meat one bit.

And if you do, there are a handful of dishes that do have meat. Because there will be people who wander into the restaurant and not expect it to be so vegetable-forward. 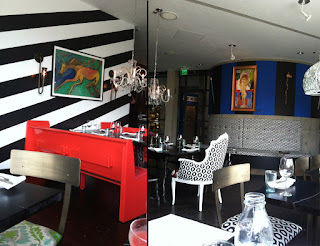 We started our meal off with cocktails, naturally. The Cheshire Cat involved Anchor Junipero gin, cucumber-lemongrass syrup, fresh mint and lime, fizzy water, and something called "Magic Velvet Blue Ice," which turned the drink pink as it melted. It was bright and cucumbery, lightly sweet, and very refreshing. I preferred it to my Melon Spruce, made with Deep Eddy’s lemon vodka, watermelon juice, pomegranate juice, rose water, and micro flowers. It was sorta melon-fruity, only vaguely sweet, and very very strong. I mean, I can swill a cocktail or three with the best of them, and I was feeling tipsy halfway through this one. Woo! 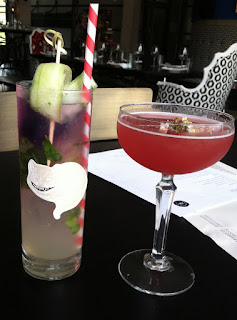 I really needed the drink to be able to tackle the menu, which is one of those that list ingredients without giving much indication of what the dish will be like. I really kinda hate that. Other descriptions are just confusing, like the one for the first dish we chose, "TURNIPS deviled, faux eggs, smoked paprika." Were we getting deviled turnips served with fake eggs? Are faux eggs some sort of weird vegan thing made with tofu? Not exactly. The turnips themselves, halved and cooked until tender, formed the "white" of the egg. The yolk was a loose puree of chick peas. They looked like deviled eggs, and they sortakinda even tasted like deviled eggs, only the textures were wrong. It's actually a very clever and cute dish; I just would have described it differently, perhaps as Turnip deviled "eggs." 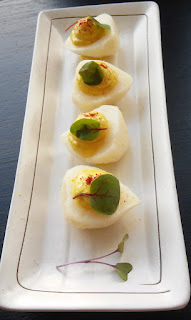 Sorry. As a professional writer, I can't help myself.

The next dish we tried was potato croquettes. Some of the little potato balls had a fairly smooth mashed potato filling and others had chunkier bits of tuber, which I liked. The rich and tangy saffron aioli was a nice accompaniment, and the dish was visually appealing. So much better than the tater tots that have infested menus recently. 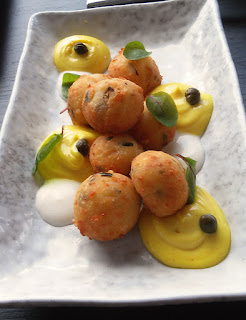 We also tried the heirloom tomatoes, which was recommended by our server. They were pretty good; it's not high tomato season here in Maryland yet, judging by my garden full of small green hard specimens, so this can only get better as the summer goes on. The sauce of black garlic, however, was mighty tasty, and I need to concoct something like it at home now. 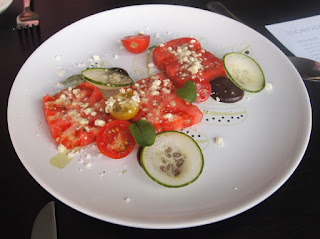 We decided to order items in shifts, so they wouldn't all end up on the table at the same time. If you're into ordering more than three or four dishes, you should probably do the same. Since most of the dishes are veg, they come out pretty fast.

One of the non-vegetarian items recently added to the menu is oysters on the half shell. These were Malpeques, from Prince Edward Island. topped with a green tomato granny smith mignonette, and cilantro oil. Also a fennel flower, which added an unexpected bit of crunchy texture. Pretty good, very fresh, the hint of cilantro was interesting. 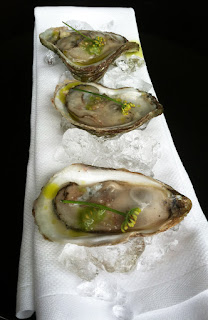 Then we had the list of ingredients that read "GREENS shaved zucchini, smoked tomato vin, crumbled tofu, heirloom tomato, avocado." I see "greens" and think collards, etc., so was a little surprised it was a nearly entree-sized cold salad. The smoked tomato vinaigrette was delicious, and the chunks of firm pressed tofu were a nice change from croutons. Pretty and tasty. 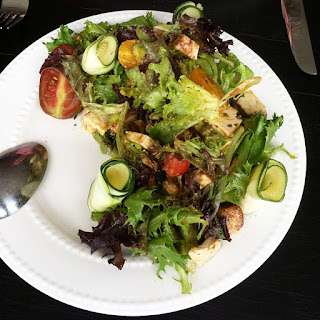 Out of everything on the menu, I was most interested in the dish pretty accurately listed as "CARROTS roasted, whipped goat cheese, harissa honey, hazelnuts." I adore roasted baby carrots with tops, and these were pretty perfect. Tender but not mushy, sweet but not cloying, with an impeccably smooth goat cheese to add a bit of tang. The best part was the chopped hazelnuts, which added so much lovely crunch. And it was gorgeous. Love the blue bowl. 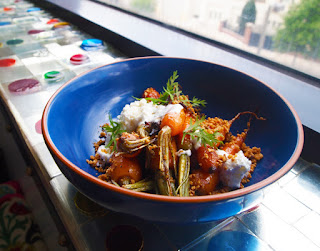 At this point, we were getting pretty full, despite eating mostly veg. We were going to order the gnocchi and the brussels sprouts, but after the manager came over and talked up the duck (which had appealed to us early on in the decision-making process), we had to order that as well.

First, the sprouts. They were fried and had both crunchy (less-cooked) and crispy (more-cooked) textures, with tiny sweet red grapes and lots of toasted pine nuts, all tossed in a figgy syrup. The dish could have used a bit of salt, but was otherwise fine. One can never go wrong ordering brussels sprouts at any restaurant owned by Robbin Haas that has Melanie Molinaro in the kitchen (try them at Birroteca and Nickel Taphouse if you get a chance - both excellent). 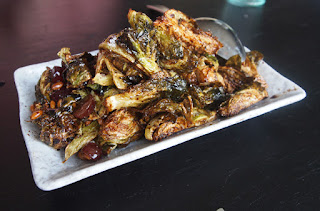 The mushroom bolognese on the gnocchi had the salt the sprouts lacked (so I tried to eat them together). Otherwise, the sauce had a nice depth of flavor despite containing no meat. The ricotta gnocchi were firmer than my homemade ones, almost like potato gnocchi, but they were very tender and had a smooth bite. A shower of crispy breadcrumbs added a nice nutty texture. 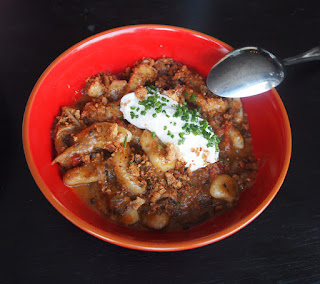 Saving the best for last - I am so glad we ordered the duck. While not the promised medium rare (closer to medium), the duck was juicy and nicely seasoned, with crispy skin and little or no fat. I loved all of the flavors and textures on the plate, from the tangy rhubarb jam to the strips of raw fennel and nubbins of farro. I mostly wanted this dish to see how the caramelized white chocolate was worked into it. Would it be a sauce or a coating on the meat? No, it was sprinkled on the plate here and there, small beige bits that offered a bit of creamy sweetness that tied the dish together. 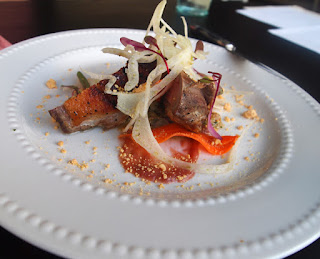 After nine plates (oink) we were too full to even think of dessert.

At this point, Encantada had only been open for a week. Not all of the dishes were perfect, but most were very very good. There certainly is a ton of variety on the menu, with both bold and subtle flavors, meat and non-meat dishes, and even a trompe l'oeil plate. And while (I think) the menu isn't the most helpful, your server will definitely be able to guide you into selecting dishes that will make up an interesting and balanced meal.

Encantada is the fourth restaurant in the third floor space at AVAM (if you count the Gjerde brothers' incarnation of Joy America Cafe as a separate entity from the original), and we hope it will be around for a while.