The Summer Fancy Food Show has come and gone and I'm just getting around to writing about it. :) But the summer has been busy with other stuff, and it's always a good idea to cogitate on things before putting them on paper. Or in this case, online.

Judging by the many tea products I sampled, tea is trending. Here are a few products that I really enjoyed. 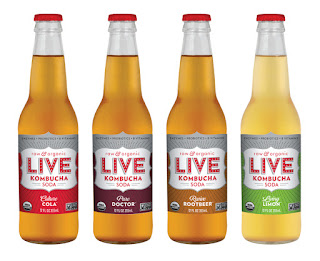 Kombucha is a tea-based product that some find hard to drink. Granted, fermented tea does have a lot in common with vinegar, and for the most part, the non-hipsters among us don't go around drinking vinegar. I think kombucha is quite palatable, but it all depends on the flavor. Ginger works really well to mask the fermented taste, for example. What really works to hide the whole kombucha-ness of the stuff is to add fizzy water and sweetener and turn it into soda. Live Soda company does just that in flavors like rhubarb and rootbeer that are actually very tasty. And because the company is based in Texas, they also make a flavor called Pure Doctor that mimics Texas' own Dr Pepper quite nicely. There's just a bit of tangy afterburn with each sip, but it goes down like a refreshing soda. Unlike soda, Live Kombucha Soda has probiotics (Lactobacillus and Saccharomyces boulardii), electrolytes, b-vitamins, and antioxidants.

I also had a rose flavored chai tea latte by Bolani that was scrumptious. It was sweet and creamy, with chai spices and also a fairly heavy hit of rosewater. Not enough to be perfumy, but it was definitely there. It was like drinking liquefied Turkish delight, which, if you're like me, you'd be totally into. They also do black tea, plain green tea, and a mint green tea that can be consumed straight from the package, or warmed up.

Numi Teas has come out with a line of organic, fair trade teas made with turmeric, a spice with anti-inflammatory properties. They also have four new "Indulgent" teas flavored with chocolate. The turmeric teas are on the unusual side, but the chocolate flavored ones are quite a treat. I like to drink them warm, with milk and sugar. 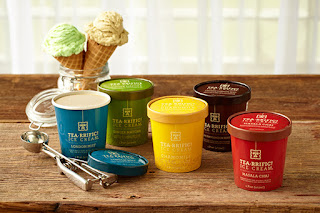 My favorite tea product of the show also involves milk and sugar. Tea-rrific Ice Cream, out of Connecticut, is a line of tea-infused ice creams in six flavors: Ginger Matcha, London Mist (Early Grey with vanilla), Masala Chai, Chamomile, Chunky London Mist (with chocolate and pecans), and Lavender Blueberry. The ice creams are made with hormone-free cream, cage-free eggs, and evaporated cane juice infused with high quality teas, like chamomile from Egypt. I don't even like chamomile tea (nor did any of the people I spoke to at the Tea-rrific booth), but the chamomile ice cream, with its distinct honey notes, was my favorite of the bunch. Honestly, they were all excellent. In fact, Tea-rrific Ice Creams were my favorite product at the whole show. And considering how many things I tried, that's saying a lot.