This flashback only goes back to early last year, but it's a post on ribs and dry rubs, and since tomorrow is the Fourth of July, I thought it could be appropriate. Last minute, but appropriate.

Some time ago, oh, 20-odd years or so, I took a long overnight drive with a couple of friends. After 16 hours of No-Doz and coffee, griping, bitching, and desperately trying to keep one of us (not me) from popping a Dylan tape into the cassette deck, we found ourselves at our destination--Chicago. There, after a much-needed nap, we indulged in some of the things the Windy City is most famous for: Cubs baseball, Chicago dogs, blues music, and barbecue. 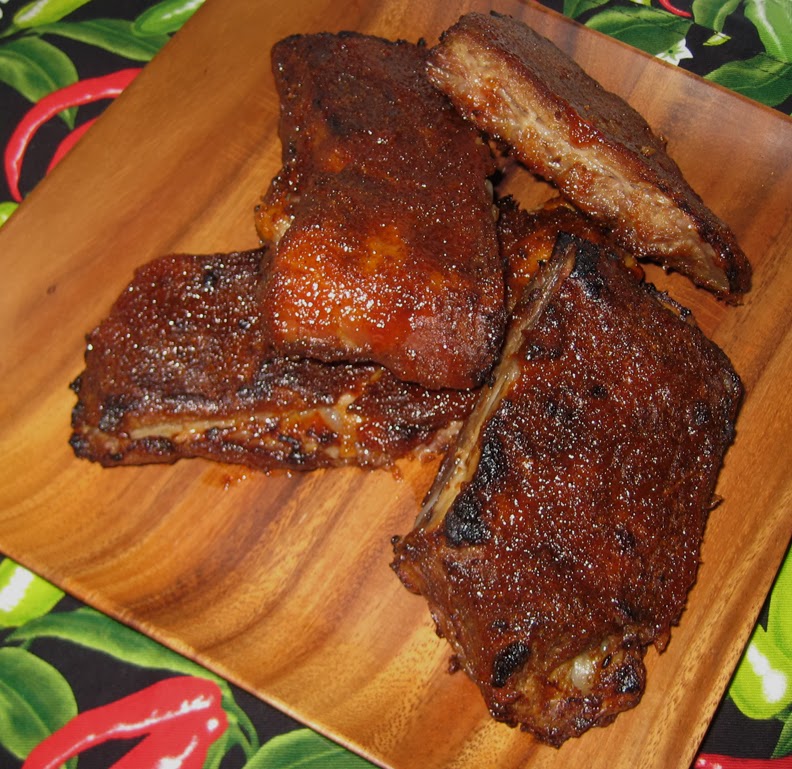 One of our evening excursions during our stay involved both blues and barbecue. As this was long before teh Innernets, I'm not sure how we discovered that a restaurant called Brother Jimmy's had both the ribs we were craving and live music, but we found the joint and paid it a visit. The place was packed, but we squeezed into three seats and ordered a bunch of food. We decided to try every type of ribs they offered, and that included their sauce-less dry rub ribs. Now, this was back before my palate was used to eating spicy food on a regular basis, and I could swear that my nose hairs were singed a bit when I lifted one of those dry rub ribs to my lips. They were incendiary, at least to us, but they were so good. I think I ate the majority of them, even though my mouth went numb after the second one.

I've eaten a lot of ribs since then. Heck, I've cooked a lot of ribs since then. I use Alton Brown's method of steaming the meat in foil with a bit of liquid before putting them under the broiler (or on the grill) to char with a little sweet sauce. The ribs are moist and succulent that way, but much of the dry rub seems to wash off, leaving them on the bland side. I decided to change the method a bit to see if I could keep the rub from coming off yet cook the meat in the same way.

The first step: make a dry rub. I usually just toss some seasonings with kosher salt and brown sugar (I do not use Alton's recipe--it is outrageously salty). This time, I wanted to achieve some nice heat, so I piled on the chiles.

The second step: cut back on the liquid used for steaming the ribs. Alton puts his ribs into little foil packets with a half cup of liquid in each. I used a scant quarter cup. The ribs still were very tender, but the liquid didn't wash off the spice. Remember--while the ribs are cooking, they produce still more liquid, so they really don't need all that much to start with.

While these ribs weren't nearly as spicy as the dry rub ribs from Brother Jimmy's, and I did coat them with a sauce later, I think they were some of the best ribs I've made to date.

1 rack of St Louis-style or baby back ribs

To make the rub: Combine all ingredients in a bowl. Reserve three tablespoons for glaze.

Place a sheet of aluminum foil on a large rimmed baking sheet and set close by.

If you're using a slab of St Louis-style ribs, cut the slab into three pieces. Tear three large sheets of heavy-duty aluminum foil, each large enough to hold one of the slabs. Place the sheets, one on top of the other, on the counter in front of you, horizontally. Place one slab of ribs on the top sheet; coat the top and bottom of the ribs liberally with rub, pressing it into the meat. Take the top and bottom edges of the foil and bring them together like a tent. Fold the edges together and roll them down towards the meat to make a package. Roll the open sides of the package up toward the center to seal all sides. Repeat with other two slabs of ribs. Place all three wrapped packages on the prepared baking sheet.

(If you're using baby backs, leave them whole and use only one large sheet of aluminum foil.)

Refrigerate ribs for 6 hours or overnight.

To make the glaze: Place all ingredients in a small saucepan. Heat until warm, stirring to combine. Remove from heat and set aside. Refrigerate until ready to use.

Gently unroll one short end on each package. Pour in a scant quarter cup of liquid of your choice--apple juice, Dr Pepper, water, whatever as long as it's not alcohol (you don't want to tempt a fire)--and re-roll the end. Keeping the packets on the rimmed baking sheet, put the whole thing into the oven.

Remove tray from oven and turn on the broiler. Gently unroll one end of each package and pour out the liquid. Cut ribs into two-rib pieces. Place the ribs on a foil-lined baking sheet and brush the top side liberally with the glaze. Broil for 5-8 minutes, until sauce is bubbling and charred in spots. Turn meat, brush with more glaze, and repeat broiling.