Hooked on Tuesday is Bonefish Grill's new promo featuring three course meals starting at $14.90. Diners have a choice of house or Caesar salad, one of nine entrees (each with a side and veg), and a dessert. Depending on the entree chosen, dinner can cost as little as $14.90 or as much as $20.90, which is still super inexpensive, especially considering all of the choices are either steak or seafood.

Bonefish Grill in Towson invited us to try a Hooked on Tuesday dinner for ourselves. How could we refuse? 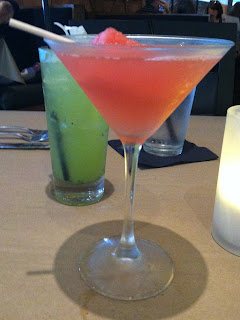 We started with a couple of cocktails, including a "Fresh Watermelon Icicle Aphrodisiac Martini" (hand-muddled watermelon, fresh sour, house-made cucumber infused vodka, and frozen watermelon cubes), and a Summer Kiwi Smash (Olmeca Altos silver tequila, freshly muddled kiwi, mint, lemon juice, and an edible summer orchid.) Over the years, I've had several drinks that didn't taste particularly watermelon-y, but this one had a nice fresh melon flavor. The kiwi drink was basically a light-flavored margarita. 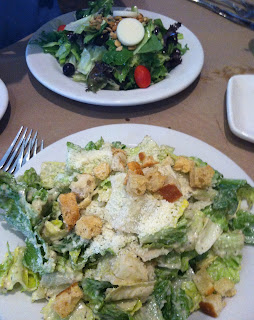 There are only two options for appetizers with the Hooked on Tuesday dinner, a house salad with hearts of palm, kalamata olives, and a citrus herb vinaigrette, or a Caesar salad. We tried both. The former was pleasant and light. The Caesar was enormous, with a super garlicky dressing that was quite good. 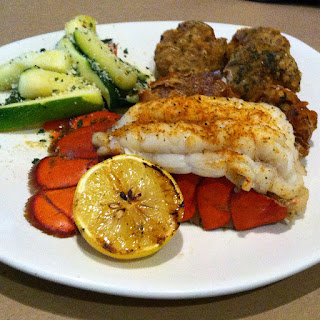 We skipped over the three $14.90 entree choices (Angler's steak, spicy tuna bowl, salmon) and went for the pricier items. I chose the cold water lobster tail for $17.90. While not particularly large, the tail was nicely cooked. I used the pesto olive oil that came with the bread service as a dip for the lobster; like the Caesar dressing, it was quite garlicky, which I enjoyed. Accompanying the lobster were small Yukon gold potatoes that had been battered and fried. They reminded me of a cross between Thrasher's fries and my grandmother's potato pancakes, only super crispy. 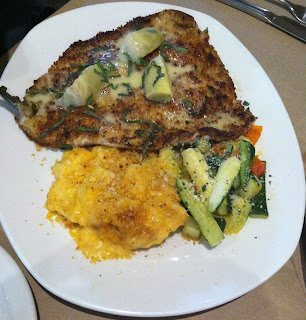 Mr Minx went for the pecan Parmesan crusted rainbow trout with artichoke hearts and basil lemon butter from the priciest ($20.90) tier. He chose potatoes au gratin for his side, and both of us got the same combo of zucchini and bell peppers with cheese as our veg. Trout and pecans go so well together, and we were not disappointed by his fish. 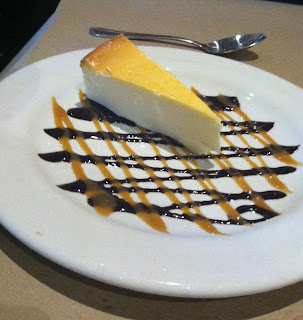 Next came dessert. Mr Minx's cheesecake, served with chocolate and caramel sauces, was extremely light and creamy, almost like a no-bake cheesecake. My "Jen's Jamaican coconut pie," was quite homey, with a heavy coconut to custard ratio, a boozy Myers's rum sauce, and toasted coconut on top. Honestly, it was one of the best restaurant desserts I've had in a long time. And, according to the manager, it's only available on Tuesdays during the Hooked on Tuesday promotion, so if you want to try it for yourself, that's the time to get it. 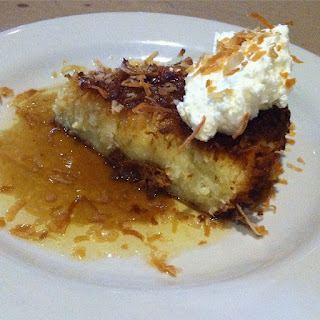 Our verdict: Bonefish Grill's Hooked on Tuesday promotion is a great deal. The portions are generous, the food is good, and when else can you get that fab coconut pie? With rum sauce. Seriously the pie is worth the trip. Go. Eat pie. And some salad and fish, too.