Pappas Restaurant has been around since 1972. Even today, Joe Mannix (splendidly attired in a large-scale Glen plaid sportscoat) would be perfectly at home in the main dining room, grooving to Tony Bennett and Frank Sinatra. Mike Connors is 87; I'm not saying that's the average age of Pappas' diners, but Mr Minx and I were definitely among the youngest people in the place, nearly half-full at 5:30 on a Thursday.

The menu probably hasn't changed all that much in the last forty years, apart from the additions of jalapeno poppers, chicken wings, and tiramisu in the 80s, fried calamari and orange roughy in the 90s. The rest is old-school Baltimore: seafood, steaks, and Italian-style dishes, served with two veg or a salad and one veg, presented in little side bowls, diner-style. The big draw at Pappas is the crab cake, a monstrous 8oz pile of colossal lump crab that was featured on the cover of Baltimore Magazine's July 2009 issue. 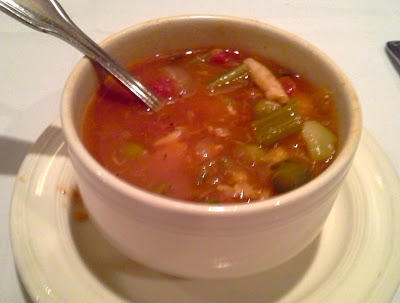 We each had a bowl of Pappas' Maryland crab soup. The flavorful and well-seasoned tomato-y broth was chock full of vegetables including miraculously non-mushy lima beans. I would have liked some more crab, but overall, the soup was pretty good. 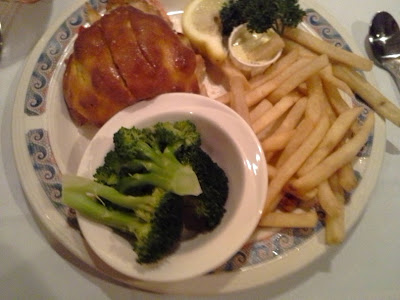 The first time we went to Pappas was last Spring, while we were writing the Food Lovers' Guide to Baltimore. I ordered the broiled scallops, which were bland and overcooked. Mr Minx ordered the crab cake, and loved it. This time, I got the crab cake and he ordered stuffed shrimp, a childhood favorite.

Three jumbo shrimp were broiled and topped with a huge mound of crab imperial, and broiled again. The imperial - which was pleasantly moist but not over-mayonnaised - had a nice brown glaze from the broiler, but the shrimp, which had been cooked twice at this point, were a little tough. 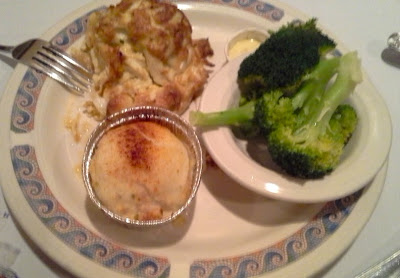 My crab cake was impressively large and bursting with huge chunks of crab. The binder tasted like a mixture of mayo and mustard, and there was little, if any, crab spice, so the naturally sweet flavor of the crab shone through. One of my main issues with crab cakes made with huge lumps of crab is that if breading is used, it presents itself as pockets of mush that serve as spackle between the pieces of meat. This was the case with my cake at Pappas. One of my other issues is dryness, but Pappas' crab cake was nicely moist.

Our sides were fine. The broccoli was served plain, unseasoned, but had been perfectly cooked. Mr Minx's fries were standard issue. My "jackknife" potato, which I had ordered because I had no idea what it was, ended up being a fluffy mashed potato-like creation flavored with bacon and paprika and broiled until the top had a bit of crispness.

Overall, it was a good meal. We appreciated the dish of cool, crisp, sliced cucumbers and celery that we nibbled as we perused the menu. The service was attentive but not obtrusive. And the food was good. If you're looking for something fancy, go elsewhere, but if you want something that resembles a mountain of crab meat, then Pappas is your place.