I am so not into writing a recap for this episode, so this one is going to be short and sweet. Mainly short.

In this penultimate episode of Food Network Star, the final four are asked to pitch one solid concept to the Network, aka Susie Fogelson and Bob Tushface. They in turn will choose only three Wannabes to make "pilots." Damaris, Russell, Rodney, and Stacey are told to come up with two concepts to present to Bobby, Giada, and Alton, who will tell them which one sucks the most.

Stacey presents first. Concept number one involves going to restaurants, a la Restaurant Impossible, and giving one dish a makeover from vintage to modern. Her second concept involves modernizing old recipes that just don't seem to work anymore, like Jell-O salads and chicken a la king over Minute rice, I suppose. The mentors think she should combine the ideas, so that she could modernize either restaurant dishes OR recipes from home cooks.

My concept for Stacey: I think she should go to restaurants that have fancy schmancy Modern American food and teach them how to make Jell-O salads (preferably green ones with canned pears) and sloppy Joes with Campbell's chicken gumbo soup.

Russell is up next. He suggests that either he go to other people's restaurants and talk about culinary sins, or have Russell's Dinner Party with Sinful Foods. (Shouldn't all proper dinner parties include bourbon, bacon fat, ice cream, and offal?) The mentors suggest that he go to restaurants and cook dishes with a sinful twist.

My concept for Russell: I kinda like the dinner party idea. But he should always have one guest that's a fussy tee-totaling vegan who is forcefed bourbon and pig tails. 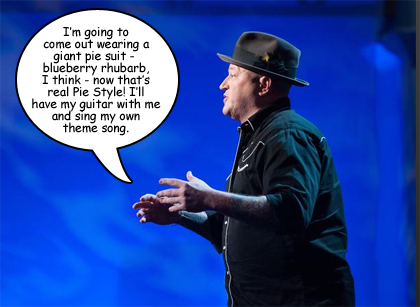 Rodney wants to take restaurants' signature dishes and turn them into pie - a Throwdown Pie Style. Or he could visit famous musicians and make pie with them. The mentors suggest that he have restaurateurs dare him to make pie out of their signature dishes, which Rodney thinks is brilliant, even though it's essentially his first concept.

My concept for Rodney: I think he should go around to celebrities like Brad Pitt and George Clooney and sock them in the face with giant pies.

Finally, Damaris suggests she could do a boring cooking show on modern Southern food, or teach guys how to cook to "trap" a woman. While the mentors take umbrage to the word "trap," they prefer the second concept.

My concept for Damaris: She should wear a grey feathered wig and get her teeth replaced with giant, blindingly-white, Giada DeLaurentiis-brand false teeth and deep fry everything, including butter. Oh wait - that's been done already? 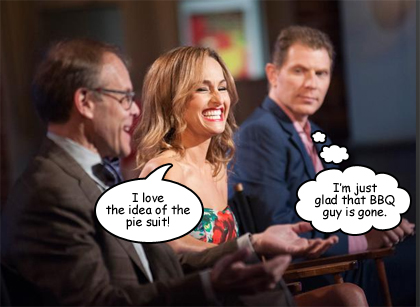 Now we basically see the same thing all over again, this time in front of Susie and Tushie. Once again, Stacey presents first. She wants to show the Selection Committe that she can make an emotional connection, so she comes out telling a sad tale about her restaurant woes. The pathetic air carries over to her pitch for "Stacey's Modern Magic." Susie tells her the maudlin attitude doesn't make her pitch appealing. So basically Stacey just pulled a Plaxico and shot herself.

Russell is reveling in his "Guilty Pleasures." He tells the judges he wants to take ordinary foods and make them sinful. Susie decides that she likes him and that she gets his concept.

Damaris has cleverly decided to title her show, "Eat, Date, Love." She manages to convince the judges that Southern food is the "food of love," and that she is going to teach hapless men how to cook for their wimmenfolk. When asked if it worked for her, she claims to have "caught and released a lot of gentlemen" in her time. (Or vice versa.)

Finally, Rodney comes out and is Pie Style all over the place. The judges don't need much convincing that he can make a pie out of anything. They find him charming and fun.

Ultimately, Stacey's pilot pitch is boring and a little pathetic, and she is sent home. 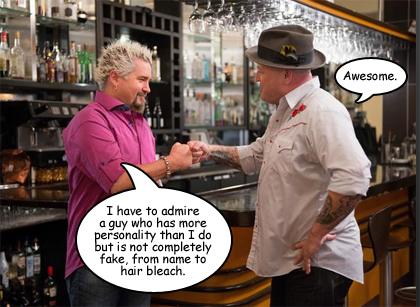 Next, the pilots get filmed. Or in the case of Rodney, the "pie-lot" is filmed. He meets Guy Fieri at Eric Greenspan's restaurant, the Foundry, where the most popular dish is a grilled cheese sandwich with Taleggio and short ribs. After Rodney takes a huge-ass bite and unsuccessfully tries to talk with his mouth full, Guy Fieri--a pro at talking with his mouth full--shows him how it's done. And then Rodney makes a pie. The result is highly entertaining. I'd watch it. 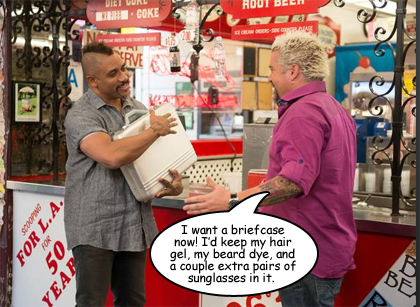 Russell goes to Bennett's Ice Cream in the LA Farmers' Market. He asks to taste the Cabernet Sauvignon sorbet, and then whips out a briefcase full of culinary sins. I *love* the conceit of the briefcase, which has been fitted to hold containers of fat, bourbon, etc. He then goes into the shop's kitchen to whip up some bacon bourbon ice cream with liquid nitrogen. I'd watch his show, too. 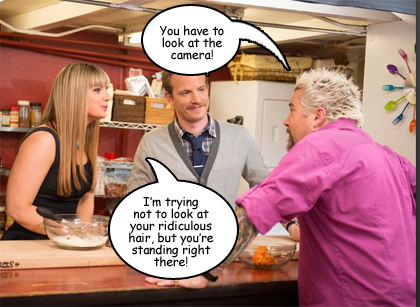 Finally, Damaris films her pilot with Guy. While her concept is pretty good, she's just not making any eye contact with the camera, instead concentrating on the guy she's teaching to make pork loin and sweet potato biscuits. She's also waaay too giggly. I like the idea of the show, and I like Damaris, but she'd be better off in a different format, I think. She's more interesting when she's off-the-cuff.

So, what did you think about the pilots? Which, if any, are you voting for?