Can you believe Next Food Network Star is already in its 9th season? And that Guy Fieri won his season seven years ago? Surely his fifteen minutes of fame was over years ago. Surely.

Last season we had a big format change - Alton Brown, Bobby Flay, and Giada De Laurentiis were "mentors," each with his or her own team of future Guy Fieri wannabes. The home audience got to select the winner, and it was Justin Warner who seemed the most worthy of a show on the Food Network. Ok, that was mean. Justin actually seems too talented to be on the Food Network. Apparently the network thought so too - after dragging their feet for months and months, Warner got a one-off prime-time special. The show was basically the same cooking travelogue that's been done before by Fieri, Rachael Ray, the Neelys, Alton Brown, and just about every other Tom, Dick, and Harriet on Food Network.

This season, they've decided to shake things up a bit more. Rather than coaching teams, the "mentors" are back behind the table with the rest of the selection committee, Bob Tushface and Susie Fogelson. And there will be focus groups who will attend the challenges and influence the judging. Finally, in the long tradition of stealing ideas from Top Chef, one of the eliminated FNStartestants will be invited back into the competition at some point closer to the finale. But I'm getting ahead of myself.

The show starts off by introducing the Wannabes, one at a time, as they enter the cavernous sound stage that will serve as the setting for much of the competition. First in is a food blogger who has her own Internet cooking show, Nikki Dinki. I'm sorry, but her name makes me laugh. Her parents must not have liked her very much. Stacey is cute and low key. Then we get Russell, who looks familiar to me--was he on Rocco's Dinner Party? And Rodney Henry, Baltimore's own rock-n-roll pie man, owner of Dangerously Delicious Pies. I have a feeling he won't win this thing, but I'll be rooting for the hometown boy anyway. There's also Chad, who's tried out for the show three times in the past, and who refers himself as a "bbq Jew." His gray hair looks dirty and greasy, which is an automatic black mark in my book. Put a hair net on that, boy. Viet is a very accomplished chef who beat Bobby Flay on Iron Chef America, but he seems too introverted to be on television. And  Danushka. Ah, Danushka, who is bound to be a source of drama for at least a few episodes. She's a icy Slavic former model with a rather imperious attitude. Right away, she rubs Lovely the wrong way, and vice versa. I think Lovely is going to be one of those style over substance people. That's not to say that she has style. There's also Chris, a successful restaurateur who seems a bit hyper, Damaris, a Paula Deen-wannabe, Peruvian princess Daniela, and Andre, he of the scary eyes and successful weight-loss story.

Giada walks in and breaks up the party. 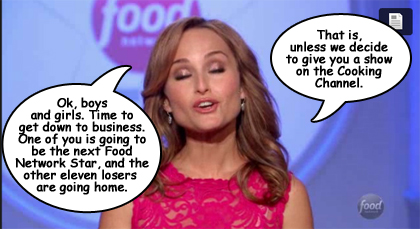 Then Bobby and Alton emerge from the shadows to give the Wannabes their first challenge - a 30 second pitch.

Each of the candidates gets in front of the camera to tell their story in half a minute. Everyone is nervous - some more nervous than others. Stacey comes out talking about cooking "vintage items," which makes me wonder if she's just another Retro Rad gal that will get called a one-way monkey for her constant reinventions of meatloaf. Danushka is positively frightening. Her tone of voice is grumpy, and she admits that even her mom says she came out of the womb looking pissed off. 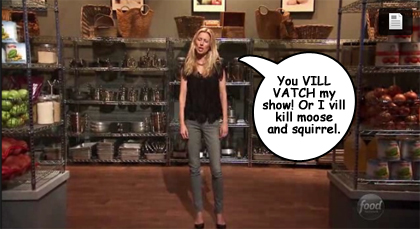 Damaris, a perky blonde from Kentucky, comes off as a bit of a loon, but in a fun way, not in a Danushka way. Rodney is one of the rare ones who gets it right the first time. He's absolutely sure of who he is and he tells us - he's the Pie Man.

Nikki, who has spent a lot of time in front of the camera in her vlogging career, nails it as well.

Lovely talks about making everything "glam." Why does food need to be glamorous? It just needs to taste good. But, yannow, obnoxious gimmicks work for Guy Fieri.... 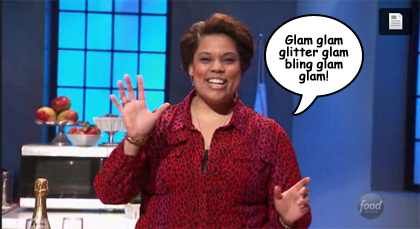 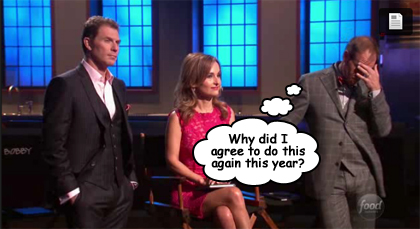 Half of the Wannabes use the word "journey" in their pitch. In fact, it's used incessantly on most reality shows, including Dancing with the Stars. I mean seriously - they fucking danced. I nominate it for Most Overused Word of the New Century. It's worse than "awesome."

Once the pitches are filmed, Alton tells the group they will now be cooking a tasty bite for the selection committee. Each Wannabe must feature the lowly potato in his or her dish. 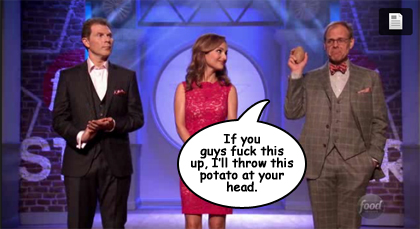 They load everyone onto the Official Food Network Ship O' Fools and head to a downtown LA party venue. It's located in the Haas Building, which I can tell because the building is labeled "HAAS BLD'G" in giant serif lettering. So giant, the sign people couldn't fit the whole word "building" on the front. So riddle me this, Batman - why only one apostrophe? Shouldn't there be another to replace the "ui" as well? 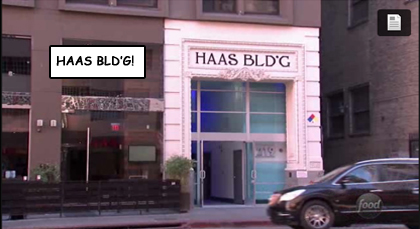 Also a riddle - why the Wannabes had to cook somewhere other than their huge soundstage. Did the kitchen supply store fall down on the job?

Once in the kitchen, Nikki promptly cuts both hands in succession, claiming that she doesn't have a time crunch when she's filming her own show on teh Innernets. While she bleeds all over the food, Danushka complains about everyone around her. 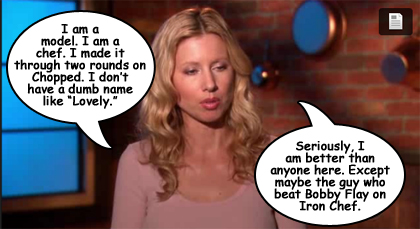 Eventually, time is up and everyone is ushered upstairs to the astroturfed roof area, where Susie Fogelson and Bob Tushface are waiting with Giada, Bobby, and Alton. They indicate that they will be watching the pitches and tasting the potatoes, but there will be a focus group sitting off to the side who will also cast judgement. They will be holding little boxes with a dial and a knob which they will turn to indicate whether or not they like a presentation. This freaks the competitors out, because they didn't realize that real people will be judging them, too. 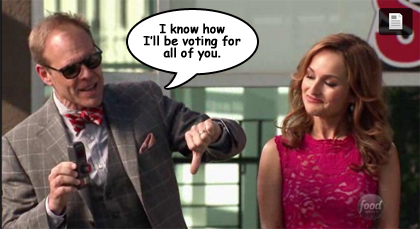 The Wannabes are whisked away and the dreaded focus group takes their seats. The contestants come out one at a time to watch their horrid pitches and hope that the people with the "dials of doom" don't judge them too harshly.

Tushface doesn't seem to get half of the presentations. He really doesn't understand Lovely's whole "glam" thing. The selection committee seemed to like her potato dish well enough though. 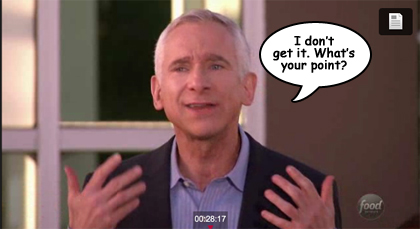 Russell didn't thrill anyone; they thought he was a bit of a Debbie Downer. Chris was another one who confused Tushface. He spoke of compassion, but what did that have to do with food? 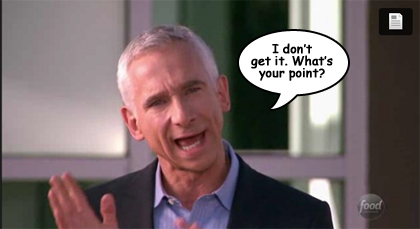 Stacey's presentation was pretty successful, as was her dish, but Tushface said she was too low key. Remember, he wants another Guy Fieri, not another Amy Finley. Remember Amy Finley? No? I don't either.

Danushka's Neo-Fascist theme was too bizarre for Susie and Tush, and Andre was too "closed-off." Also, his eyes are scary. Damaris presented an odd 30 seconds, but odd in a good way, and her potato dish was lovely. Nikki really wowed the panel with her "meat on the side" mostly-vegetarian pitch, but Susie called her on being a bit too cutesy. Daniela was a mess, but her potatoes were a "nice traditional dish" (not sure if that was meant to be a compliment or not). Rodney was intriguing. Viet's dish was "ridiculously good" but his personality was a bit low-key. Remember Amy Finley! And finally, Greasy-haired Chad set the focus group on fire (unfortunately, not literally) but his food was merely ok.

Eventually, everyone is done and stuffed back into the U.S.S. Delusional for the ride back to the studio. There they find the selection committee sitting at a long table that looks suspiciously like the Shrine of the Glowing Vagina from last season. 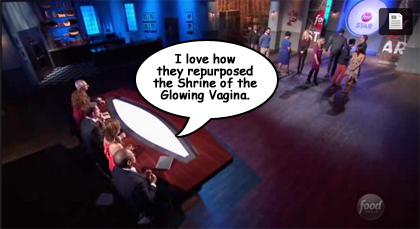 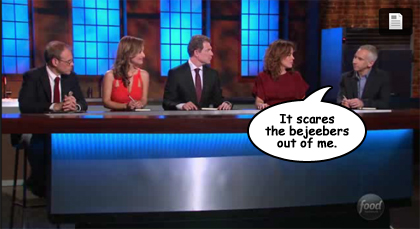 As the vagina glows ominously, each of the panel tells a Wannabe that he or she is safe, starting with Chad, Nikki, and Stacey, who received the highest scores of the day.

There are three left standing - Daniela, who was a big nothing, scary Danushka, and Russell. They're sent off so the panel can deliberate a bit more before deciding who goes home. 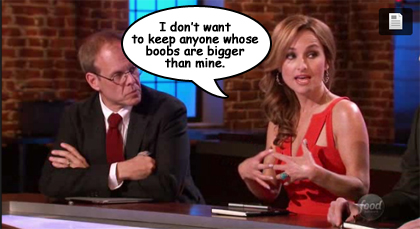 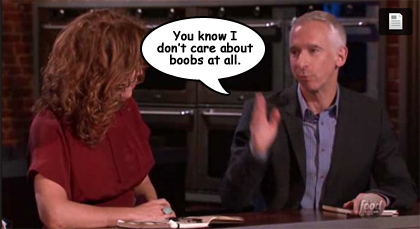 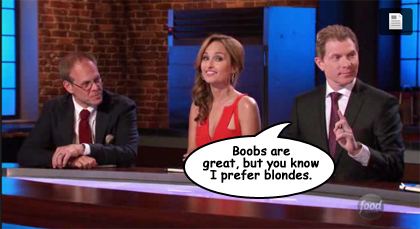 Russell didn't do well either with his tasting of potatoes or his presentation. Danushka sucked in both categories, too. Daniela's pitch was awful, but the judges seemed to enjoy her papas huancainas just fine, I guess. Did it seem that way to you? So Daniela stays on the basis of good cooking, right? No, she gets sent home, probably because the producers think Russell and Danushka will be better for the show's drama quotient. And Danushka is blonde.

Next week: Burgers. Bobby Flay gets a chance to be at his critical best. Or douchy, whichever you prefer.