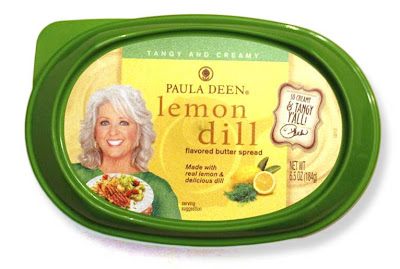 That seems like a no-brainer, doesn't it? Paula Deen-branded butter. But she's pushing it as a "finishing" butter, something to be added at the end of cooking. You know, like after you take your deep fried butter balls out of the deep fryer, you can top them with a little bit of this stuff, for extra flava.

Judging from the photo on the top of the carton, in addition to the lemon and herb and whatnot, there's some tooth-whitener in this stuff. Oh, and despite Paula's attempt to rebrand herself as "healthy," the butter is still 100% fat, just like any other butter.

Apparently part of the proceeds from the sale of her buttah, as well as her line of chocolates and tortilla chips (strange bedfellows), is going to charity. Her charity. Honestly, I'd feel more virtuous seasoning butter with herbs and citrus zest on my own and giving money to a charity of my choice than making this woman any more of a deity to the obese than she already is.

Her products are available at Wal-Mart. She certainly knows her market.