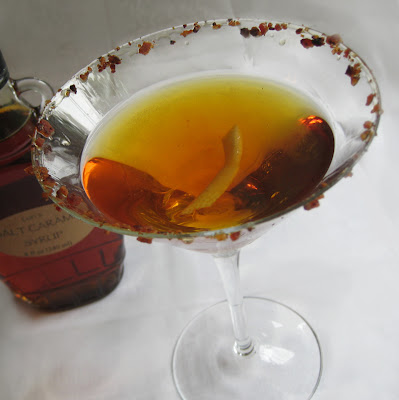 I'm going to the Fancy Food Show in NY next week. This will be my first one, and I'm excited! In preparation, I contacted a couple of the purveyors listed on the Specialty Foods web site in order to get information in advance. There are way more exhibitors than I'll be able to visit, and I figured this way I'll get a better idea of products that might be of the most interest to me.

One of those products was Lori's Salt Caramel Syrup, from the French Connection in Ashland, Oregon. They won't be at the show, but they were willing to send me some of their product to sample.

The syrup is made from caramelized cane sugar, Tahitian vanilla, Celtic sea salt, and a soupçon of maple. The flavor is subtly salty, and subtly maple-y, and I can see how it would be terrific on pancakes. Their marketing director suggested that it can also be used on ice cream, oatmeal, and corn bread, but I thought it would make a nifty addition to a cocktail. With bacon.

After trying the syrup with both rum and bourbon, I determined that bourbon was the perfect choice. The resulting drink is simple, and reminiscent of a Manhattan. Because of that, I'm calling it an Ashland, after the town in which Lori's Salt Caramel Syrup is produced.

Lori's Salt Caramel Syrup
bourbon (if you can get some bacon-infused bourbon, all the better)
Angostura bitters
crumbled crisp bacon
twists of lemon peel

For each cocktail, stir 2 ounces of bourbon, 1/2 ounce of salt caramel syrup, and a dash of bitters together with ice.

Dip the rim of a cocktail glass in a bit of the syrup, then in the crumbled bacon. Strain the drink into the glass. Add the lemon twist.