Cooking With the Orioles' Wives

Way back in 1986, the wives of the Baltimore Orioles put together a cookbook to benefit the Cystic Fibrosis Foundation - Maryland Chapter. Because it was both Orioles- and food-related, I bought a copy of Birdfeed and spent many happy hours reading and re-reading it. Not that it was a particularly good cookbook, but it was entertaining. And it had caricatures of Orioles players and coaches of the time, some of which were pretty good. (I was an illustration major at MICA at the time and caricatures were my thing.)

Like most community cookbooks, the recipes range from the very simple to the fairly complex, depending on the cooking skills of the recipe's owner. Pitcher Mike Boddiker's wife, Lisa, seemed to enjoy cooking, as some of her contributions were the most complex. One recipe she offered is for kolaches, a yeast-raised, fruit-filled pastry of Slavic origin that requires several hours of kneading and resting before eventual shaping and baking. For my first foray into cooking from this book, some 27 years after its purchase, I chose to make Lisa's Oatmeal Cake. With my adjustments, of course.

The recipe originally called for 1 cup each of brown and white sugar - entirely too much - and I reduced the white sugar to 1/2 cup. There was also no instruction as to what sort of pan to use. The amount of batter seemed a bit much for a single 9" square pan, especially as the baking time was a scant 30 minutes, so I baked it in one 9" square pan and one 9" round pan. Both produced adequately tall cakes. I think a single 9" x 13" would work fine, too. 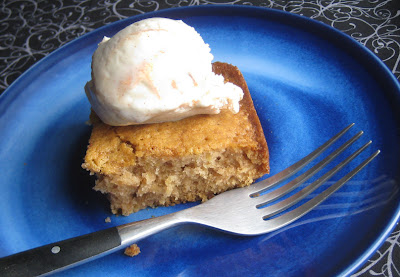 The resulting cake was really quite delicious. Very moist and fluffy, with a pronounced oatmeal and cinnamon flavor. We happened to have some horchata-flavored  ice cream on hand (a Mexican drink made with ground rice and flavored with cinnamon) and it was the perfect accompaniment.

In a large saucepot, bring the 2 cups of water to a rolling boil. Once it reaches the boil, stir in the oats and turn off the heat. Cover pot and allow the oats to absorb all of the water, about 20 minutes.

In the bowl of a stand mixer, cream together the butter, sugars, and vanilla. Add the eggs one at a time and beat until incorporated. Stir in the oatmeal. Mix the remaining ingredients together in a bowl and slowly add to the wet ingredients, beating only until everything is incorporated. Do not overmix.

Scrape mixture into a greased 9" x 13" baking pan, or two 8" or 9" round or square cake pans. Bake about 30 minutes, until a toothpick inserted in the center comes out clean.

Allow to cool on a wire rack. Eat warm or cold with ice cream.