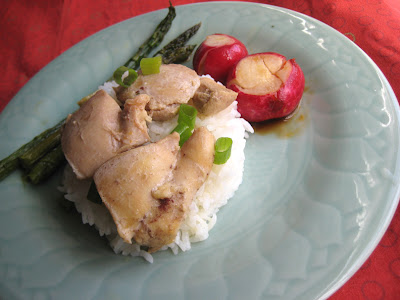 I recently obtained a copy of Fuchsia Dunlop's latest Chinese cookbook, Every Grain of Rice: Simple Chinese Home Cooking. Honestly, the recipes are quite simple, only partly because we have most of the more exotic ingredients on hand already (chinkiang vinegar and shaoxing cooking wine, for example). Flipping through the book, I found several recipes I want to make, including a couple of cold chicken dishes that would be perfect for a summer supper, especially if there's leftover rotisserie chicken in the fridge. Dunlop also includes a recipe for red-braised pork, which is also in her Revolutionary Chinese Cookbook: Recipes from Hunan Province. I remember it being quite tasty and while contemplating making it again for a weekend dinner, I thought, why not use chicken, instead? There are a plethora of boneless, skinless chicken thighs in the freezer, and that seems like the perfect meat for red-braising.

I've eaten red-braised beef, and made red-braised pork more than once. Red-braising is a Chinese cooking technique that involves stewing meat in a mixture of soy sauce and spices like cinnamon and star anise. The resulting dish is subtly flavored, and more of a brownish--rather than reddish--hue. Chicken proved to be an even more subtly-flavored protein, so I upped the amount of soy sauce and star anise from Dunlop's recipe. The chicken cooks gently at a low temperature for a fairly short amount of time, leaving it very tender. I served it simply over steamed jasmine rice with sides of piquant smashed radishes (also in Dunlop's new book) and some asparagus that I roasted with garlic. Delicious.

Heat the oil in a large saucepot (I used a 3-quart lidded pot). Add the scallions and the ginger slices and stir fry for a few moments. Add the chicken pieces and cook for about 5 minutes, stirring occasionally (it's ok if they get a little brown in spots, but we're not looking for browning here). Dump in the stock, wine, soy, star anise, and cinnamon stick and bring to a boil. Cover the pot and turn the heat down to medium. You want the liquid to be lightly simmering, but not at a full boil. Cook for about forty minutes, stirring occasionally, and skimming and discarding any foam off the top. After the cooking time has elapsed, test a piece for doneness. The meat should be supple and tender; if it's still a little tough, cook for an additional 10 minutes or so, but don't cook it so long that the meat starts to fall apart.

If the meat seems a little bland, add a bit of salt. Serve with rice, garnished with scallions. The stock is delicious, so use it as a sauce to moisten the rice, or eat it as a soup.

Marinated Radishes (adapted from Every Grain of Rice)

Smash the radishes with the side of a cleaver or a heavy chef's knife. You just want to make them splay out a bit, not break them into pieces. Put them in a bowl and toss with the salt. Allow them to sit in the salt for about half an hour, then drain the liquid that has collected in the bowl, rinse the radishes under cold water, then drain them well again. Mix the soy, sambal, sugar, and sesame oil together in a small bowl until sugar dissolves. Pour over drained radishes and stir to combine.