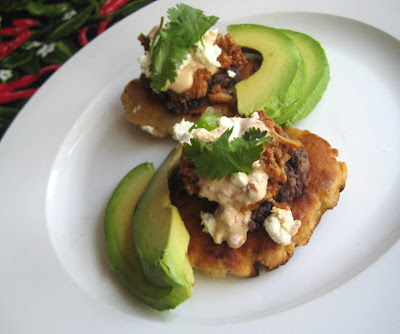 After seeing several Internet items extolling the virtue of making one's own corn tortillas, I thought I'd give it a go. Why not try it to celebrate Cinco de Mayo, a holiday that means nothing to most Americans but, like St. Patrick's Day, is a good excuse to drink?
But we had a pack of corn tortillas in the fridge already, and, truth be told, Mr Minx isn't all that fond of tacos made with soft corn tortillas. (I know!) So instead of tortillas, I figured I'd make some other sort of fried thingy with my newly-purchased bag of masa.
I noodled around online and found recipes for things called sopes, which appeared to be thick fried tortillas with a rim around the edge. But some of those recipes were similar to the rimless gorditas, which may or may not be split open and filled, depending on the recipe consulted. This blog (and others) calls them Salvadoran enchiladas, but if there's no chiles on them, etymologically speaking, how is that even possible? 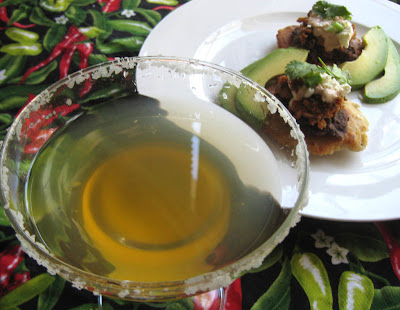 If I did call them sopes or gorditas and, heaven forfend, topped or filled them with something non-traditional or not from the proper region, the spirits of Mexican grandmothers will haunt me forever. Or so my research led me to believe.
I decided that the best--and safest--technical term for fried corn thingies made by a gringo like me would be Fried Corn Thingies. Then I would be able to top them with whatever my little heart wanted to top them with, without fear of repercussions from the Great Beyond. For our Cinco de Mayo dinner, that was a combination of chicken and chorizo, plus refried black beans and various condiments. On the side I served my version of esquites, and we washed everything down with passionfruit margaritas. Well, the original intention was to have passionfruit margaritas, but the Ceres brand passionfruit juice I purchased didn't taste very much like the tangy fruit in question. They were ok, but not anything to write home about. Especially if home is Mexico. Everything else, however, was muy bueno. 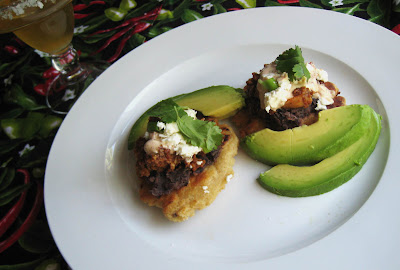 Layer beans, chicken, chipotle sauce, salsa, and cheese on a Thingy. Top with avocado and cilantro. Devour and repeat.

Mix masa, water, and 1/4 cup oil into a smooth dough. Divide dough into 10 pieces. Form each one into a flattened disk about 1/4" thick.

Heat a griddle or large frying pan. Add disks a few at a time and cook for about 2 minutes on the first side, until it starts to brown lightly. Flip the disks, cook 2 minutes more on the other side, and remove from heat. Set aside until ready to eat.

When ready to serve, cook the thingies about 2 minutes per side in a bit of oil to crisp. Drain on paper towels.

Put beans and water in a saucepan and cook over medium high heat, stirring frequently and vigorously, until most of the liquid has evaporated and the beans are mostly mashed. Remove from heat and add salt and pepper to taste.

In a large saucepan over medium heat, cook onion in a bit of oil and a pinch of salt until softened. Remove chorizo from casings and add to onions, breaking up sausage with the back of a wooden spoon. Cook, stirring frequently, about 5 minutes, until sausage starts to darken. Add the chicken thighs, broth, and cilantro. Bring to a boil, then cover the pot and turn the heat down to medium-low. Simmer chicken about thirty minutes until tender.

Remove chicken from pot and allow to cool for a few minutes. With your fingers, two forks, or a knife and a fork, shred/chop the meat into small piece and add back to the pan. Turn up heat and cook, uncovered, until most of the liquid has evaporated, skimming off most of the red oil that rises to the top. Stir in the garlic, brown sugar, and vinegar. Cook an additional minute or two and season with salt and pepper to taste.

Mix all ingredients thoroughly. Cover and refrigerate until ready to serve.

Mix first four ingredients in a bowl. Season to taste.