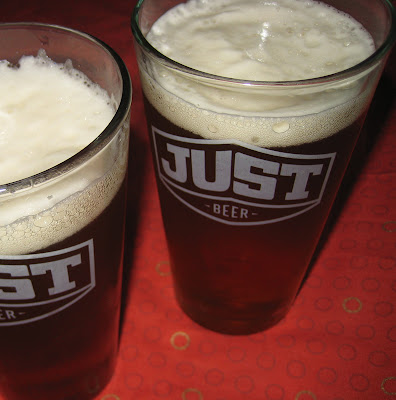 After generations of drinking crappy beer that tasted more like the byproduct of large horses with extremely hairy legs than hops and barley, Americans have started to demand better libations. Craft beers are being produced everywhere, and even Baltimore has been named one of America's best beer cities. Now one can buy beers of every color and strength, flavored with fruits, coffee, and even peanut butter. But sometimes folks just want beer that tastes like beer. And that's where the Just Beer Project comes in. Alan Newman, founder of Magic Hat Brewing Company, and no stranger to craft brewing, realizes that there are some people out there who just want a tasty, uncomplicated brew that they can drink all night long. Just Beer's first product is Just IPA, which comes in at 5.2% ABV (alcohol by volume).

Just IPA is lightly bitter and lightly floral, just enough of both to keep the drinker from getting bored, but not so much that the beer is more interesting than the food that it accompanies. Or doesn't accompany. We're not huge IPA drinkers in this house (but, I must confess, I do rather like the super floral/fruity ones) but both of us were pleased with our sampling of Just IPA. We're hoping there's a Just Lager coming out in the future because we just happen to enjoy lagers with Baltimore's favorite summertime meal, steamed crabs.

Just IPA is available in a limited area for now, and only on draft at the following Baltimore-area locations.