Sorry this post is late this week - you have to understand that Christmas cookie-baking takes precedence over Top Chef.

So what happened this week? Umm...lots of stuff. Lots of product placement. That's getting to be the thing this season, isn't it? This week's first product is Reynolds Wrap, and the only female chef to win Top Chef, Stephanie Izard, is on hand to plug the shiny aluminum-based stuff. The wrap is actually the theme ingredient of this week's Quickfire Challenge. Every ingredient is wrapped in it, and the cheftestants can use only Reynolds Wrap as their cooking vessels. But they can make anything they want! Well, anything they want to make from the ingredients they happen to unwrap from the pile of unidentifiable silver-colored objects in the pantry. It's the luck of the draw. 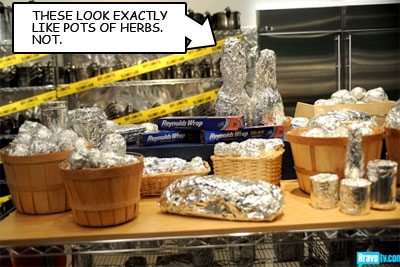 Some chefs were luckier than others. Some were also smarter. TMHCiD, for example, thought he was picking up a pot full of herbs but actually got a pineapple. Because pineapples feel exactly like pots of herbs. (What sort of "herbs" was he looking for?) A shame he didn't pick up two objects that were completely different from what he imagined them to be because I could then make a joke about him being foiled...again. Or maybe it's best that I not get that opportunity. In any case, Bravo beat me to it, because according to their Web site, they've titled this episode, "Foiled Again!" I'm not sure if I should feel clever or dumb because I had the same thought as the network.

After thirty minutes of Full Metal Jackets, Padma and Stephanie taste the chefs' dishes. They're not much impressed with Brooke's bacon dish, or Micah's near-raw lamb chop, or Mustache's chicken. But Sheldon, Danyele, Stefan, Josie, Bart, and Kristen did make good dishes. Kristen made a very successful sponge cake (thankfully she didn't get stuck with an onion or sardines) and wins the challenge and immunity from elimination in the next one.

...sort of an advertisement for Remlinger Farms Berry Festival, only they don't mention "Remlinger Farms Berry Festival" nearly as often as they said "Reynolds Wrap." For this challenge, the chefs have to battle head-to-head, creating a dish using an assigned berry, and making enough food to feed 150 Festival attendees. The six chefs who came out on top in the Quickfire get to choose one of the chefs who didn't fare as well as their opponent. Except for lucky Kristen, who doesn't have to battle anyone. Well, apart from Stefan and his affections. The losing member of each pair will be up for elimination, and will be selected by the Festival attendees.

After the chefs pair up and receive their berry assignment, they scurry to shop. Stefan is going to battle TMHCiD, and the bitchery begins pretty much as soon as they get back from the store. While Stefan cuddles with Kristen on the sofa of their condo (she is very tolerant, and young) TMHCiD dings him for purchasing frozen tuna. Stefan is confident because the product he bought - saku block ahi tuna - is sashimi grade and customarily used in sushi bars around the world. In fact, most tuna is frozen before being consumed. Just because it appears fresh at the fish counter doesn't mean it was not frozen at one time.

Anyhoo...the chefs head to the venue and find they have to cook under a big tent with very little counter space and too few blenders. There's much elbowing and jostling and possibly some biting but eventually everyone gets their food done. 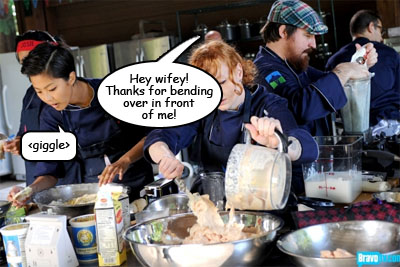 Has anyone else noticed that Micah seems douchier with every episode? Perhaps in an attempt to seem less prick-y, he tells us that he and his babymomma have named their kids after foods - Rutabaga and Kumquat. or something like that. The cheftestants then cart their shit to pairs of booths where they can finish assembling their dishes and serve the crowds.

While they're setting up, Tom does a walk-through, which he seldom does anymore. Stefan and TMHCiD are still at it, with Stefan confident that he can beat the pants off a 53-year-old, and TMHCiD still bitching about the frozen tuna. Not only does he not like the fact that its frozen, but also that it's not sustainable. Ah, Rick Moonen isn't even in this episode but we still feel his presence.

The bitching dies down long enough for the judges and attendees to taste the cheftestants' dishes. 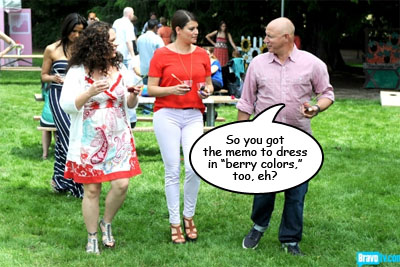 Mustache and Danyele have used blueberries in their dishes. While Mustache's dish is delicate and light, Danyele's chicken terrine is rubbery and her crostini is too thick and crunchy. The blueberry element - a mostarda - isn't quite a mostarda.

Josie is making her raspberry spring rolls to order and slathering them with raspberry mayonnaise. She's her usual jolly self, but that leads Gail to wonder sotto voce if she's high. The amount of time it's taking Josie to put her food together is annoying the guests. Meanwhile, Lizzie's pork with bacon and raspberries is getting her all of the votes. 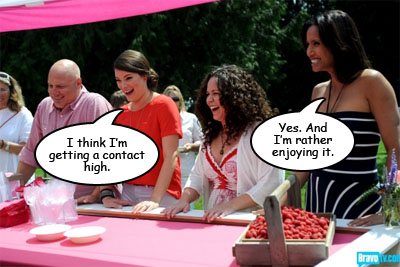 TMHCiD was so busy picking on Stefan, he didn't notice that putting an element as powerful as chorizo in a dish as delicate as white gazpacho was a bad idea. The meat overpowered any gooseberry flavor there may have been. Stefan's frozen tuna crudo, on the other hand, was a big hit. And he tells us he wouldn't flush his poop with TMHCiD's soup.

Brooke and Bart both had blackberries, and for the most part, both made good dishes. Brooke's multi-element pudding smacks of s'mores, and Bart's blackberry soup is outstanding. A shame he ruined it by putting a piece of salmon in it. Please, chefs - let this nasty fruit and seafood pairing act as a reminder that fruit and seafood should never be paired.

Finally, Kristen battles herself with a lovely tayberry and goat cheese concoction that has the judges swooning.

Later, back in the stew room, Padma comes in and calls for TMHCiD, Josie, Bart, Micah, and Danyele. They have made the worst dishes of the day and are duly spanked before being sent back to bring out the winners. The judges and Festival attendees alike favored the dishes of Sheldon, Stefan, Brooke, Mustache, Lizzie, and of course Kristen, whose dish was most favoritest, winning her a cool ten thousand smackeroos.

When they go back to the stew room to gloat, Stefan tells the losers that "wifey" won the challenge. "Wifey" doesn't seem annoyed.

The losers go out once again to face Gail, Padma, Tom, and Stefanie (who needs some conditioner, stat). They say that no matter how many times TMHCiD says he's not making excuses, he's making too many excuses for his bad dish. Josie's dish didn't have a clear flavor of raspberry, and the faint whiff of weed in the air around her booth wasn't enough to change the judges' minds. Bart redeemed himself with his delicious soup, so the nasty salmon bit could be forgiven. But Danyele's terrine was just too much like bad lunchmeat, and she got the axe.

Back in the stew room, Stefan and Josie go at it. At this point, I shut my brain down so don't know what exactly was the topic of contention, but I'm sure we'll see it all over again at the top of next week's episode.