This week's Quickfire Challenge might be considered cruel and unusual punishment, as the sleepy cheftestants had to rouse themselves at 3:45 AM and get to the famous Pike Place Market, home of flying fish and the original Starbucks outpost.

Not only that, but it's Stefan's 40th birthday. (A belated happy birthday to Stefan!) He's worried that the "birthday curse" that struck down so many of his teammates in season 5 may resurface this season just for him.

Padma greets them in her jammies and a sour look on her face. She's accompanied by the much more chipper Daisley Gordon, who happens to have two establishments at the Market. Apparently he thinks it's a swell idea for the cheftestants to cook breakfast for the farmers' market vendors who will be arriving shortly. 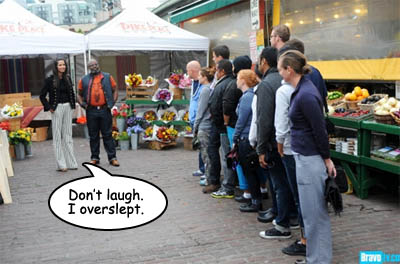 The catch - breakfast must be on a stick. Another catch - it's a team challenge. The fourteen cheftestants must pick a partner with whom to work. It's still pretty early on in the competition, so not everyone is not pal-sy yet. (Pal-sy, not palsy, dammit. Ok. Friendly.)  Josie ends up with Eliza, who learns that Josie is a "my way or the highway" type of person. 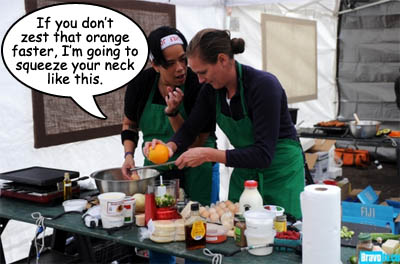 An even worse pairing is the Mustache and TMHCiD; we already know they hate each other's guts. Either that, or are in love with each other but can't admit it just yet. (It's the mustache, I'm sure.) Stefan, surprisingly, doesn't pick Kristen, but he does get a pretty girl in Brooke. (I wonder why he hasn't started hitting on the only obvious lesbian in the group, Josie. Is it because she's taller than he is? Or is it because he's also a "my way or the highway" person and their highways are going in different directions?)

Daisley provides a pantry of ingredients for the cheftestants, but they have to set up their own "kitchens" with equipment from the nearby Sur la Table and $500. And everything - including the cooking - must be achieved in 45 minutes. Rush rush hurry hurry! Big Belgian Bart slips and falls with his panini press and it conks out while he and Sheldon are trying to cook their "green forest" breakfast sandwiches. Other cheftestants are making crepes, pancakes, or tacos, except for Lizzie and Danyele, who manage to grab only pancetta and berries from the pantry table so can't really make much of interest. 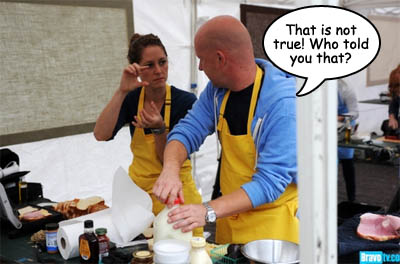 Time goes fast, especially when 50 portions are needed, and soon the hungry hordes are shoving skewers into their mouths. I have to wonder how many people stabbed themselves that morning. Soon, sleepy Padma and Daisley, who have tasted all of the wares, give the verdict. Josie and Eliza's pancake stack on a stick is a disappointment, and Lizzie and Danyele's meagre berry offering fares likewise. On top are, surprisingly, TMHCiD and Mustache, and Sheldon and Bart, who get the win despite the broken panini press. They also get immunity from elimination in the next challenge, and believe me - they will need it. 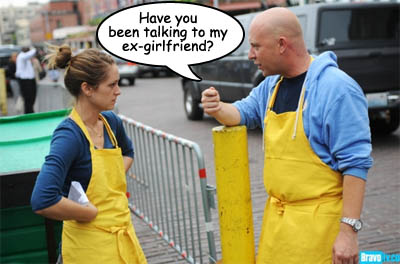 Everyone will, actually. The next challenge stymies all and sundry. The cheftestants must remain in their incompatible pairings and create a dish using one of the more unusual ingredients produced by market vendors. They draw knives to see who gets stuck with the rose petal jam and who gets stuck with the salmon candy, and then have to get to work immediately. There's no day of rest this time, no day of shopping and napping. They're making lunch, and it needs to be served in two hours.

This time, the market itself serves as the chefs' pantry, and they run around picking up both the theme ingredient of their dish, and other stuff they might need. They cook their grub at Marché, which is one of Daisley's restaurants. The kitchen can't accommodate fourteen chefs working at once, so four teams get to work first while the others heckle them. At this point we really get to see how dysfunctional some of the teams really are. Mustache and TMHCiD realize that this challenge is important, and do their best not to get on each other's nerves. They politely agree with the other, despite not really agreeing. Mustache isn't keen on the idea of cutting a pork tenderloin into steaks before searing it, but he does it because TMHCiD suggested it. He's also not thrilled with TMHCiD's grits, but he claims they're fine. Oh boy. 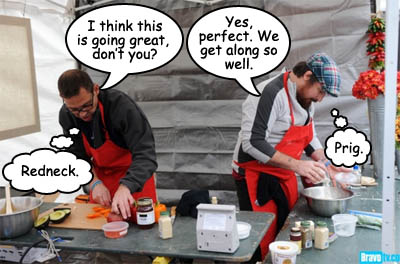 Team CJ and Tyler seem to get along fine, but CJ, despite having only one testicle, has some real cojones. Their team has to work with spicy dill pickles, so he suggests a pork burger. Tyler counters with a chowder garnished with pickle fritters, which sounds outside-the-box and daring, but CJ insists that if they do something other than a burger, Tom will say "why not make a simple burger to highlight the pickle?" Tyler, who has adopted the "I can't do anything right" attitude of every child's favorite cranky donkey, Eeyore, can't argue his point. Although he should.

Meanwhile, Padma, who doesn't get to change out of her jammies or comb her hair, is joined by Hugh, Gail, Tom, and the artisans who produced the special ingredients being maltreated used by the chefs. The first four Dysfunctional Duos emerge from the kitchen and present their dishes. And each one is a huge fail.

Stefan and Brooke had rose petal jam, which they used for a glaze on a tough duck breast and as a sauce on cloyingly sweet red cabbage. Uh-oh. Stefan doesn't seem to have any mojo this season. TMHCiD and Mustache get a thumb's down on both the grits and pork elements of their dish, with the added criticism that they didn't use the truffled popcorn particularly interestingly. Micah and Kristen, who had to use cheese curds in their dish, killed the ingredient. And I mean that in a literal, death sorta way. Finally, Sheldon and Bart present their salmon candy with sweet and sour salad that doesn't have enough salmon in it. They actually seemed to get the least amount of criticism, but its still good they have immunity.

While the tasting is going on, the other three teams are in the kitchen. Josie seems particularly impatient with Eliza, who just wants to be allowed to cook something. They're using cardamom bitters, and it annoys me that Josie says "cardamoN" every time. When it's their time to present, their dish gets dinged for being too fishy. And dirty - Padma gets sand in one mouthful, while Gail gets a rock. That'll learn ya to clean your shellfish properly, folks! Lizzie and Danyele have made a dessert with the special chocolate they're assigned, and the judges are all appalled. Hard to mess up chocolate, but they have managed quite well. Finally, CJ and Tyler's pork burger is judged. For some odd reason, they chose to put it on a crumpet, which is extremely porous (think untoasted English muffin) and became soggy fast. Tom thought they should have been more imaginative than a burger. 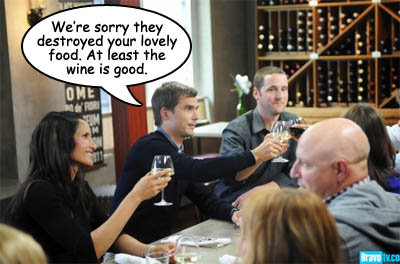 The lunch was an unmitigated disaster, and the judges felt bad for the artisans whose products were so horribly tortured in the name of lunch. Tom is in a snit and declares that nobody will win the challenge or the 10K bonus prize and stomps into the stew room to let the cheftestants have a piece of his mind. He tells them that they suck and that a whole team will be going home for its suckitude. And they'll be further tortured by having to wait until the next day to find out who is going home. The chefs cry.

The cheftestants head off to the guillotine, but only three of the teams are actually at risk - CJ and Tyler, Stefan and Brooke, and TMHCiD and Mustache. Stefan is shitting his pants over the "birthday curse," and Brooke isn't particularly pleased at the prospect of sharing his potentially bad karma. I'm hoping that TMHCiD and Mustache are sent home. "John" and "Josh" are so much easier to type, but since I've started calling them TMHCiD and Mustache, I feel like I have to stick with it the whole way. So it's just better for me if they both go. 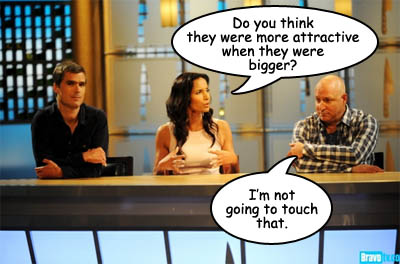 But that's not the way it goes down. While Tom and the gang hated - hated - their pork and grits, and they hated - hated - Stefan's overly-sweet cabbage that tasted like someone's grandmother, they despised - despised - CJ's pork burger. Tom says, "why did you do something so moronically simple as a burger?" and CJ says, "but I heard you in my head, saying that I should do something moronically simple like a burger." Nobody laughs. CJ then asks if the judges liked the dessert that Lizzie and Danyele made, because he thought it was an "abhorrence," which of course is a feeling and not a thing, but we can't expect chefs to be as facile with language as they are with a knife. Hugh said maybe so, but the burger was worse. Ouch. 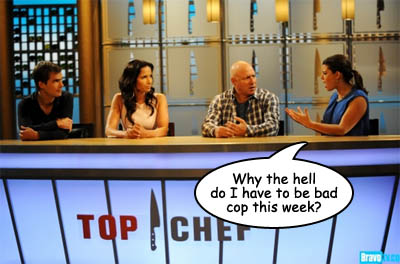 The judges can't make up their mind who to send home. One of them really hates Stefan's dish, one loathes TMHCiD's, and one wants to gouge his eyes out at the thought of CJ's. Gail has to be the tiebreaker. She apparently chooses the pork burger, because CJ and Eeyore are sent home. Too bad. I feel sorry for Tyler; unfortunately, he doesn't have half the balls that CJ has, and arguing against that burger might have saved them. Or...his chowder may well have sucked, too.